Supernovas are very huge explosions caused by a star dying. Black holes are what appear after a supernova of reasonable size. They have an extremely intense amount of gravitational force that is so powerful, absolutely nothing can get through it. Not even light.

How do they happen?

The star's core runs out of hydrogen, and nuclear fusion can't balance the pull of gravity, so the outward pressure goes away and gravity becomes the strongest force. The star's core collapses, the temperature sky rockets, and helium produces energy and increases the size of the planet, making it red. The explosion burns up everything and giant shockwaves blast the star's outer layer. 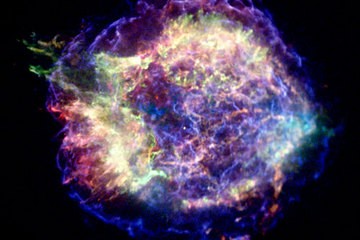 At its peak brightness, it can be brighter than an entire galaxy! The explosion shoots up huge clouds of gas and dust at up to ten percent the speed of light.