Ariel is using Smore newsletters to spread the word online.

Get email updates from Ariel:

By: Ariel, Karesse and Claire

By: Ariel, Karesse and Claire 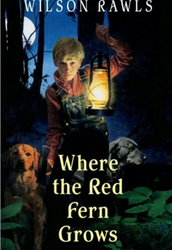 The POV of Where the Red Fern Grows is First Person. We know that because the story is told from a persons perspective and his experiences.

You couldn't catch a coon in a jillion years with that thing. Hyperbole

It's tail was as long as a corn cob. Simile

A boy who goes on an adventure with his dogs and hunts coons with them.

One of Billy's two dogs. She is very small and and track coons by smelling them.

One of Billy's two dogs. He is big and strong and can catch a coon with out hurting it.

Where the Red Fern Grows is about a boy who really wants dogs so he saves up for them and finally gets them after a few years. When he gets the dogs he trains them how to hunt for coons and they go hunting at night. He also enters his dogs in a contest for hunting and best dogs and he won. His dogs die at the end and a red fern grows where they were buried.

What did We Think of Where the Red Fern Grows

We thought that the book Where the Red Fern Grows was a good book. The book had a lot of adventure in it and it was an exciting book. When they go hunting it is very exciting because you want to figure out what happens when they hunt.

Ariel is using Smore newsletters to spread the word online.