Is the code just?

The codes were ment to be just, but they were not. Unfortunately the codes turned out unfair such as, "Law 209: If a man strikes the daughter of a free man and causes her to lose the fruit of her womb, he shall pay 10 shekels of silver.

Law 213: If he has struck the slave-girl of a free man and causes her to lose the fruit of her womb, he shall pay 2 shekels of silver." This clearly explains that slaves women get 1/5 of what free women get. Do you think that is just?

Hammurabi, the protecting king am I. . . .That the strong might not injure the weak, in order to protect the widows and orphans, . . . I set up these my precious words, writ- ten upon my memorial stone, before the image of me, as king of righteousness. -Hammurabi 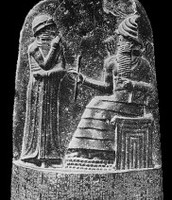 The carving at the toj› of the stele shows Hammurabi standing before Sliamash, the god of justice, who is seated on his throne. Shamash is instructing Hammurabi in the law.

This is a picture of what area Hammurabi lived in.

This is the three social classes of Hammurabi's code. 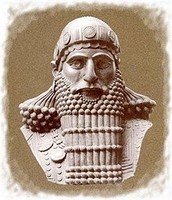 Some people may think, "wow, what a jerk!" Hammurabi was unfair along with fair.
"If a man has knocked out the eye of a free man, his eye shall be knocked out." I believe that this law is one of th equal punishments that Hammurabi has created. Still my opinion is that he was more unfair than fair.