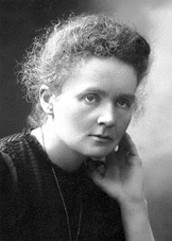 Marie worked with her husband Peire in the area of radioactivity. They were the first ones to coin the term. They also discovered a new element in 1898, and named it polonium.

The works of Marie and Peirre Curie influenced and help develop the fields of radioactivity. This allowed future scientists to use their ideas to group elements together. Their discovery of polonium also added to the periodic table.

Marie piggybacked and started her research based on a French physisist that noticed uranium put off waves smaller than X-rays. She then began to research further into this and theorized that these Rays were from the elements atomic structure. She coined these rays radioactivity.