Patricia Polacco is the author and illustrator of numerous picture books for children. Patricia struggled in school because she was unable to read until age 14 due to dyslexia; she found relief by expressing herself through art. Polacco endured teasing and hid her disability until a schoolteacher recognized that she could not read and began to help her. Her book Thank You, Mr. Falker is Polacco's retelling of this encounter and its outcome. 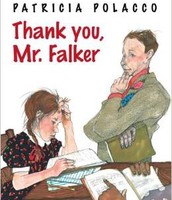 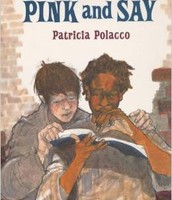 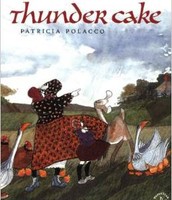 When Trisha starts school, she can't wait to learn how to read, but the letters just get jumbled up. She hates being different, and begins to believe her classmates when they call her a dummy. Then, in fifth grade, Mr. Falker changes everything. He sees through her sadness to the gifted artist she really is. And when he discovers that she can't read, he helps her prove to herself that she can - and will!

Grandma consoles her frightened granddaughter by telling her that the dark clouds of the impending storm are nothing more than the ingredients for a Thunder Cake.

Baba Yaga is a witch famous throughout Russia for eating children, but this Babushka Baba Yaga is a lonely old woman who just wants a grandchild to love.

In a true story, Pinkus Aylee, a black Union soldier, finds Sheldon Curtis left for dead and carries him home to be tended by his mother, but when the two boys attempt to rejoin the Union troops, they are captured and sent to Andersonville Prison.

The newest gem from Polacco's treasure chest of family stories extolls the virtues of reading--and of taking a study break. Young Mary Ellen would rather be "outdoors running and playing" than indoors with a book. Sympathetic to her feelings, her grandfather suggests that they find a bee tree. The Michigan woods literally buzz with activity as Mary Ellen and Grampa chase a pollen-laden bee to its far-off hive, picking up curious neighbors and passers-by along the way. Before long the original pair becomes a "thundering stampede of goats, buggies, people and bikes" in search of honey. Polacco's rollicking text provides a bubbly, adventurous tone for her cumulative romp. Boisterous color brings to life the characters' old-fashioned garb and the unspoiled lushness of the rural 19th-century setting. Fine pencil detail highlights stray pieces of hair blown back by the breeze, and the joy and determination on the faces of the honey hunters.

Lyla finds a great friend in Jamie on her first day of school, but when Lyla makes the cheerleading squad and a clique of popular girls invites her to join them, Jamie is left behind. Lyla knows bullying when she sees it, though, and when she sees the girls viciously teasing classmates on Facebook, including Jamie, she is smart enough to get out. But no one dumps these girls, and now they're out for revenge.

Since the Tall Boots--the Nazis--have marched into Monique's small French village, terrorizing it, nothing surprises her. Until the night Monique encounters "the little ghost" sitting at the end of her bed. When she turns out to be--not a ghost at all--but a young girl named Sevrine, who has been hiding from the Nazis in Monique's own basement.

A warm, lovingly told story about an intergenerational relationship. It is the beginning of a long friendship between Mr. Katz, widowed, childless, and lonely, and her young African-American neighbor, Larnel, when he presents her with a scraggy kitten. On his daily visit to the elderly woman and her pet, they talk about Mrs. Katz's husband, her arrival in the United States from Poland, and the the similar experiences of Jews and African Americans.

Patricia Polacco reads the true story of her Aunt Monique's friendship during the French Resistance. Since the Nazis have marched into Monique's small French village, terrorizing it, nothing surprises her. Until the night she encounters "the little ghost" sitting at the end of her bed. She turns out to be a young girl named Sevrine, who has been hiding from the Nazis in Monique's own basement. Playing upstairs after dark, the two became friends until, in a terrifying moment, they are discovered, sending both of their families into a nighttime fight.

This Civil War story was passed from great-grandfather to grandmother; to son, and finally to the author-artist herself, PatriciaPolacco. It is the story of Sheldon Russell Curtis and Pinkus Aylee, two Union soldiers. Sheldon, who calls himself "Say", was wounded in a fierce battle, left for dead, and found by Pinkus (Pink) in a pasture in Georgia. Pinkus' skin was the color of polished mahogany, and he was flying Union colors like the wounded boy. Pink picked Say up out of the field and brought him to where the black soldier's mother, Moe Moe Bay, lived. She cared for both boys, but they were putting her in danger; two Union soldiers in Confederate territory. They had to get back to their outfits and were faced with a difficult decision. This poignant story is one of the shared humanity of peoples of this world.

This author demonstrates the traditional Ukrainian egg-painting art, pysanky. Ms. Polacco also shares what inspired her and how drawing was an important expression for her as a child with a disability.

Feature Book - Rechenka's Eggs A rescued goose, having broken the painted eggs intended for the Easter festival in Moskva, lays thirteen marvelously colored eggs plus one final miracle in egg form. Art From an Egg - Your students will gain a new appreciation or the egg in art as LeVar decorates eggs and finds objects that are egg-shaped. Meet Patricia Polacco - This author demonstrates the traditional Ukrainian egg-painting art, pysanky. Ms. Polacco also shares what inspired her and how drawing was an important expression for her as a child with a disability. Egg Strength - LeVar does an experiment to show the strength of an egg, by standing on top of 8 eggs, and students witness a montage of animals hatching from eggs.

The MultiMedia library is open 7:30am-3:30pm Monday-Friday. Please call or email us if you have any problems or requests!
27 Gick Road, Saratoga Springs, NY, United States abehan@wswheboces.org (518) 581-3730 wswheboces.org/SSS.cfm?subpage=152bpage=152