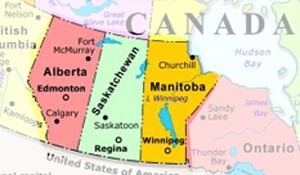 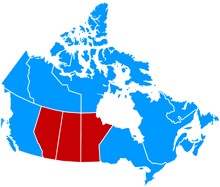 Several bodies of water are in the Eastern Prairie Provinces, including Lake Winnipeg and large rivers.

The Canadian Interior Plains, which consist of prairies and forests, are also in this region

Edmonton, the capital of Alberta, is home to the largest mall in North America (world's largest until 2004). West Edmonton Mall attracts 32.2 million visitors per year and between 90,000 and 200,000 visitors every day.

People of the Prairie Provinces are generally conservative, and the Conservative Party of Canada is very popular.

However, as urban areas are growing and with 80% of residents of the Prairie Provinces living in urban and suburban areas, the New Democratic Party is becoming increasingly relevant and holds seats at a federal level in Alberta and Manitoba.

Although the Prairie Provinces are known for being strictly Christian, and in the 1900's they were, recent polls have shown that fewer people identify as Christian or religious in general. 29% of Canadian Prairie residents reported that they are unaffiliated with any religion, whereas in 1971 it was only 5%.

Still, the majority of people are still Christian (Protestant or Catholic), with only 8% of the population being a religious minority.

Additionally, church attendance, while having decreased in the past 20 years, is still one of the highest in Canada.

The heavily religious population results in the region's focus on community and closeness of families. Families generally follow the traditional structure with a married man and woman and children.

Alberta, Saskatchewan, and Manitoba are mostly English-speaking provinces. Although in many Canadian provinces, most or many people speak French, very few people of the Prairie Provinces speak French (2% in Alberta, 4% in Manitoba, 2% in Saskatchewan).

The University of Alberta, in Edmonton, is considered one of the top five colleges in Canada and contributes significantly to the Albertan economy; annually, it is estimated that the university's contribution to the province's economy is $12.3 billion dollars and it is the fourth largest employer with 15,000 employees.

The University of Saskatchewan is ranked one of the top ten medical universities in Canada and in the top 200 colleges in the world.

The Canadian Prairies' main history began with Ottawa's promotion of "homesteading," when large areas of government-owned land were handed to settlers in order to speed up settlement and development. Immigrant farmers from Russia, Germany, Scandinavia, and Ukraine received much of this land and helped the prairies grow into Canada's agriculture base.

There were many negatives that came with settlement, though. The native Plains Indians were nearly completely destroyed and the Metis were overwhelmed with the development and struggled to maintain their independence.

When the Dust Bowl and Great Depression hit North America, the provinces' farming industry came to end and gave way to political radicalism and movements. After the second World War, the Prairie Provinces returned to normal.

Alberta- Their Western beef is very popular, and apparently world renowned. Honey is also a popular food and is made in Alberta from alfalfa and clover nectar.

Golfing is popular pastime and sport in the Prairie Provinces, especially in Saskatchewan where there are more golf courses per capita than in any other province.

Manitoba features many lakes and rivers which results in many outdoor water activities to be popular. Boating and fishing are a couple favorite pastimes, as well as hunting and spending time at the beach.

Skiing- downhill and cross-country- is another extremely popular resident and tourist activity. Manitoba offers many skiing opportunities, and Alberta is home to several world-class ski resorts and the Canada Olympic Park. 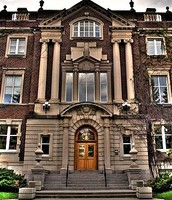 Adaptations: In the Prairie Provinces, several adaptations are made for the harsh winters, including changing what crops are grown in order to maximize survival of the crops. Another adaptation is the use of irrigation when there is not enough rainfall and where the soil is not as good.

Modifications: Canadian's have modified the rich dark soil by using it for farmland and growing wheat, barley, and oats. Starting in the 1950's, the land of the Prairie Provinces was also modified by oil drilling and production, mostly in Alberta.

www.roughguides.com
Spreading over the provinces of Manitoba, Saskatchewan and Alberta, the vast lands between Ontario in the east and the Rocky Mountains in the west are commonly