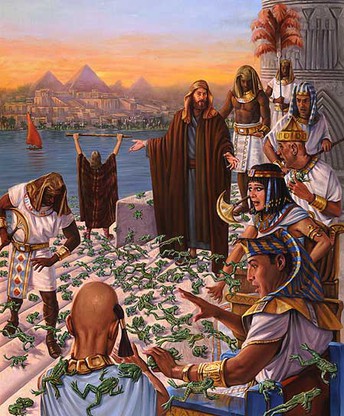 Moses and the Plagues

Who's the most powerful person you know?

Pharaoh tried to kill all the Hebrew baby boys by throwing them in the Nile. But God delivered Moses from the Nile when Pharaoh’s daughter found him floating in a basket and adopted him as her own. Moses grew up in Pharaoh’s household, but he still thought of himself as a Hebrew. When he was grown, he saw an Egyptian beating a Hebrew, and he killed the Egyptian. Afraid, he fled to Midian and became a shepherd. When he was eighty, God appeared to Moses in a burning bush and told him that he would lead God’s people out of slavery in Egypt. Who was this God who would deliver them from slavery? Not one of the many false gods of Egypt, but the one true God, “I am.” Pharaoh would harden his heart and resist, but God would show him through the plagues that there is only one true God, the God of Abraham, Isaac, and Jacob—the Lord, Yahweh.

Dear God, many people want all the power and forget about You. Help us trust in You, our powerful, one true God. In Jesus’ name. Amen.

Our God is the one true God.

Bible Lesson: Moses and the Plagues

God had Moses tell Pharaoh to let His people go or all of Egypt would be punished by plagues. God is the only true God, and He proved that to Pharaoh and all of Egypt by sending plagues that the Egyptian magicians couldn’t repeat or make go away.

These plagues did not affect the Israelites, only the Egyptians. God kept His people safe.

God takes care of us and protects us. God sent Jesus to die on the cross to pay the punishment for our sins. He gives us all we need for this life and promises eternal life with Him in heaven. Share other ways that God shows His love to you.

Lauren Daigle - Trust In You (Live)

Moses and the Plagues Bible Activities.pdf

Moses and the Plagues Coloring Page.pdf

Dear Jesus, thank You for coming at Christmas as a humble, human baby to be our Savior and King. Help us to share that wonderful good news with everyone! In Your name we pray. Amen