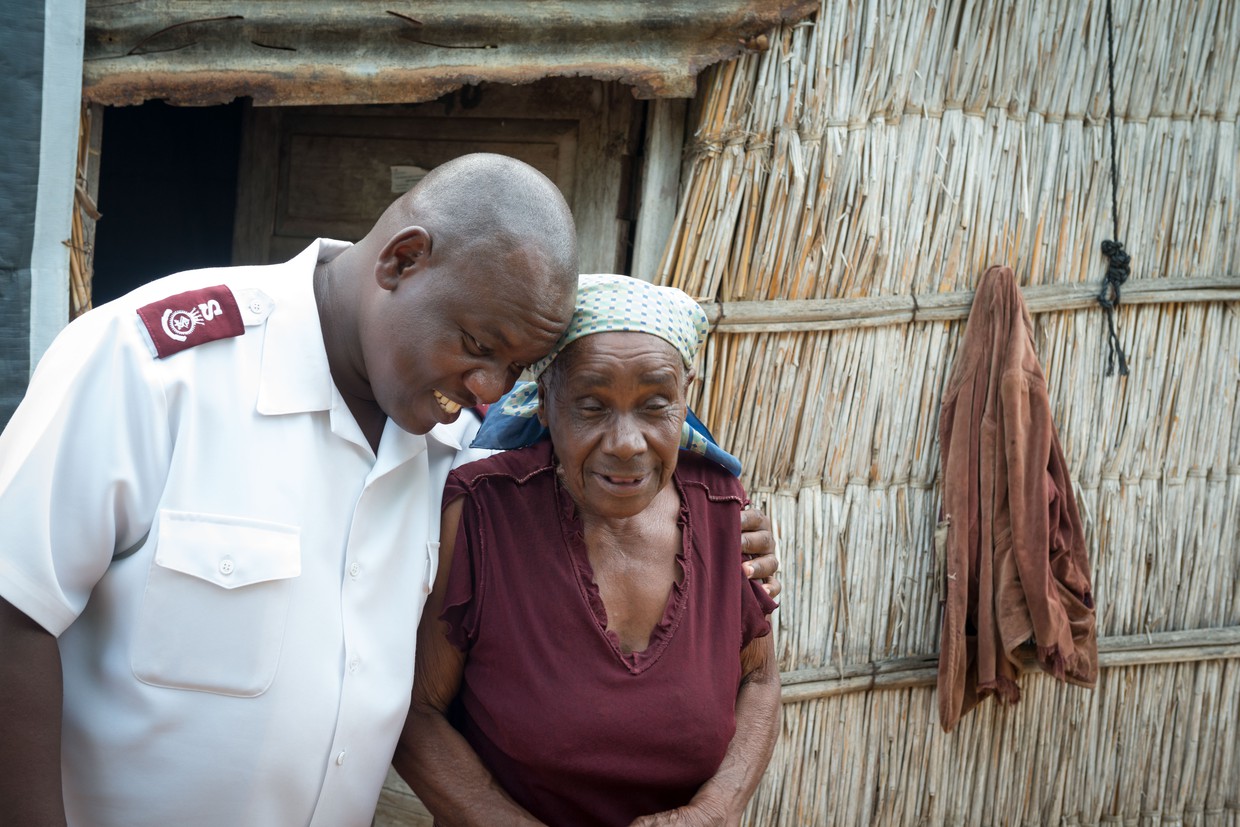 We who work in the Canada and Bermuda Territory sometimes have to be reminded of the benefits we enjoy in the two “first world” countries in which we operate. This is not to imply that there are none in our Territory who live in very challenging surroundings, but when we read, in Lt. Colonel Neil Watt’s article below, that in Jamaica “The Army at times stands alone as a beacon of light in the dark alley ways where outsiders are not welcomed” we know we have cause to count our blessings.

The article also serves to remind us that among the retired officers in Canada we are blessed with those who are both able and willing to assume further responsibilities, whether on a short-term basis or for longer periods.

The Genius of The Salvation Army

Post-retirement service in the Caribbean Territory - who could refuse a three-month assignment at THQ in Kingston, Jamaica? It’s a call one does not expect from the chief of the staff. For Lynda and myself it was a once-in-a-lifetime experience and I was grateful that the finance department was supportive of my taking a leave to serve in this way.

Historically, Jamaica was the first Caribbean island to embrace Salvationism, with the first corps (church) opening in Kingston in 1887. The city has remained as Headquarters for the 16 countries that make up the Territory.

Of course, the genius of Salvation Army administration is in its global similarity allowing for the international exchange of Officers encouraging the transfer of different thinking and organizational enrichment.

That said, we concluded our term having felt we received much more than we had given, and left with two lasting impressions...

2. Few Resources (Matthew 25:21). Not only do the officers work hard, they work with minimal resources. Corps officers run a full corps program on a shoe string. In addition, many corps run primary schools for low income families. Doing a lot with little is the norm, not the exception.

All this is done in some of the most difficult environments imaginable. Many corps in Jamaica are located in very impoverished communities not seen by tourists who visit the beaches of this beautiful country. The Army at times stands alone as a beacon of light in the dark alley ways where outsiders are not welcomed.

Henri Nouwen captured the reality of Salvation Army ministry, when he said..."The way of Jesus is radically different. It is the way not of upward mobility but of downward mobility. It is going to the bottom, staying behind....choosing the last place. It is the way to the kingdom, the way Jesus took."

"With love, the Army, no matter how small or poor or despised, is a living branch in the true vine of the kingdom of God on earth." (General Bramwell Booth)

Readers of Money & Mission appear to have found articles on tax receipting issues very useful – those issues where either the amount or timing of the receipt, or whether such a receipt can be issued at all, are not straight-forward. Test your knowledge on the following scenarios, then see the correct answers below.

1. The Anytown United Way donates $15,000 to The Salvation Army to operate a homeless shelter in Anytown. Can a charitable receipt be issued for this donation?

2. Mrs. V, a member of your corps, donates $300 to the corps, to be used for its program for covering the costs of sending the children of single parents in the corps to summer camp. Mrs. V’s cousin, Ms. X, also a member of the corps, is a single parent who has one child. Can a charitable receipt be issued to Mrs. V?

3. You have been promising a key employee of your ministry unit that the unit will cover the costs of his attendance at the national Social Services Conference. However, the unit is in financial difficulty, and you may not be able to fulfil that promise. He says he will cover the costs himself if he can get a charitable receipt. Can such a receipt be issued?

4. Mr. Y purchases a $75 gift card from a local store, and donates it to your ministry unit. Can your unit issue a charitable receipt? Does the dating of the receipt depend on when your unit redeems the gift card?

5. A fire damages the premises used by your corps. Mr. Z, the owner of a local mall, offers the use of vacant space while the damage is being repaired, provided he can get a charitable receipt for the amount of the lost rent, for which the customary charge is $1,500 per month. Can such a receipt be issued?

6. Your ministry unit is holding a fundraising auction. One of the donated items is a work of art which was purchased by the donor two years earlier for $500, and which he had just had appraised at a value of $1,000. What should the amount of the charitable receipt be?

Answers to the above Tax Receipting Dilemmas

1. The Anytown United Way, being a registered charity itself, does not require such a receipt – it will not be claiming a deduction or credit for tax purposes. The guide of the Canada Revenue Agency (CRA) indicates that official donation receipts should not be issued to acknowledge gifts from other registered charities. Rather, a letter on the Army’s official letterhead should acknowledge the gift and show the Army’s registration number (needed by the United Way for completing its T3010 information return), but it should not state “official receipt for income tax purposes”.

2. The general rule is that a donation cannot be made with the purpose of benefitting a specific person – that is considered benevolence. In this situation, if Ms. X were the only single parent in the corps, it would be considered benevolence. But if there were other single parents in the corps, and the donation were not contingent on Ms. X’s child going to camp, a receipt could be issued to Mrs. V.

3. No, this would be considered benevolence.

4. Yes, the ministry unit may issue a donation receipt to Mr. Y. It may be issued right away, even if the gift card is not redeemed by the unit until later.

6. A fairly recent CRA rule – “Deemed Fair Market Value” – applies to property donated within three years of acquisition: the deemed fair market value is the lesser of the fair market value and the donor’s cost. The charitable receipt should therefore be for $500.

Verses from The Financial Stewardship Bible

Acts 2: 44-45 “All the Lord’s followers often met together, and they shared everything they had. They would sell their property and possessions and give the money to whoever needed it.”