Madz is using Smore newsletters to spread the word online.

Get email updates from Madz:

Learn all you need to know here!

Learn all you need to know here! 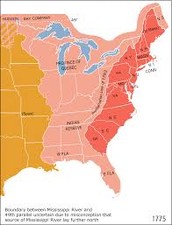 After the French and Indian war, a law was passed to restrict the colonists settle west of the Appalachian Mountains, to reduce conflict with the Native Americans. The colonists thought that Britain was just trying to gain control of them again. The colonists soon started to get very angry with Britain. But this was just the beginning. 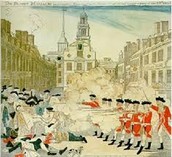 The colonist were protesting about the Townshed Acts. A huge fight between the colonists and the British soldiers broke out in Boston. 5 colonists were soon killed!!! The first man killed was Crispus Attucks. They called this the Boston Massacre because it was such a big deal.

The Boston Tea Party was set up and organised by Sam Adams and the Sons of Liberty. They had set this up to protest the Tea Act. The colonists dressed up as Indians and even bordered a British ship. When the colonists were on the ship they had managed to dump out the tea (that was on the ship) into the Boston Harbor. The colonists did not want anything to do with Britain.

Britain made even more annoying laws for the colonists to follow because of the Boston Tea Party. Britain had closed the Boston Harbor until Massachusetts paid for the ruined tea. Britain took away certain rights of the Colonists. These laws were also called the Coercive Acts. The colonists couldn't take it anymore! They were so done with Britain.

This cartoon shows how Britain was controlling the colonists like puppets on a string. www.history.com
Get the story of how a fledgling, largely disconnected nation won its freedom from the greatest military force of its time.

1, Would we be where we are today without the American Revolution?

2. What color was Britain wearing?

3. Why was America/the colonists fighting? What was their reason?

1. How many centuries of British rule did the American Revolution end?

2. Was the revolution era a good time for America?

3. Did the american revolution lead to the American Constitution?

Madz is using Smore newsletters to spread the word online.