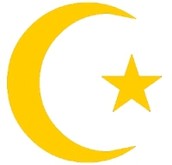 Basic things to know about Islam

The followers of Islam are called Muslims. Muslims have many beliefs including the Five Pillars. The first pillar is the belief of one god. Islam is a monotheist religion (that means they believe in one god). Muslims call God Allah. The second pillar is the belief of (prophet) Muhammad being his messenger. Prophet Muhammad was the first Muslim. He preached about Islam, and Muslims believe that Allah would sometimes speak to him. The holy book for Muslims, which is called the Quran, was revealed to him. The third pillar is to pray to Allah five times a day. The fourth pillar is charity. Muslims have to pay a small percentage of the money they make every year. The fifth pillar is fasting. Muslims fast during the Islamic month of Ramadan. Every day during that month, Muslims have to fast from sunrise to sunset. It helps Muslims understand how people without much food feel. There is a holiday celebration called Eid Al-Fitr at the end of Ramadan. People celebrate and give each other presents. Muslims do not eat pork or drink alcohol. Muslims go to a Mosque to pray. The Imam leads the prayers. The main holy city for Muslims is called Mecca. Muslims have to go on a pilgrimage to Mecca called Hajj once in their lifetime. Muslims believe in Abraham as one of their many prophets. Christianity and Judaism also have Abraham as an important person. Christianity and Judaism are also monotheist religions.

Sami Yusuf - Hasbi rabbi (lyrics)
This is a Muslim song

This is where Muslims go for prayers. Muslims can also pray at home. Mosques are always open for prayers. 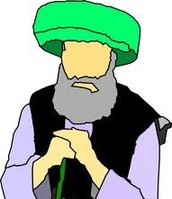 This is an Imam. The Imam leads prayers and gives sermons. All Mosques normally have an Imam. When Muslims have any type of problems, they can go to an Imam for help. 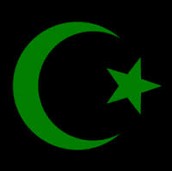 This is the symbol for Islam. It stands for the lunar calendar. The Islamic calendar is based on sightings of the moon. Some Muslim countries have this symbol on their flag such as Turkey and Pakistan. 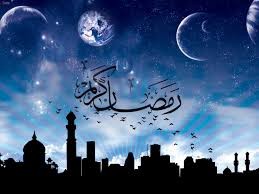 Ramadan is a very important month for Muslims. It is the Islamic month for fasting. The image above shows the word Ramadan in arabic 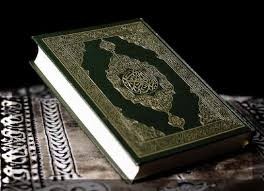 This is the holy book for Muslims. It was revealed to Prophet Muhammad by Allah. The Quran is in Arabic, but some of them include an English translation. 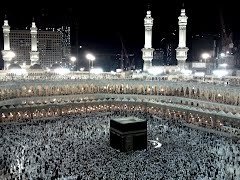 Mecca is a very important city to Muslims. It is where the pilgrimage called Hajj is performed. The cube in the picture above is called the Kaaba. During Hajj, Muslims circle around the Kaaba seven times.