Tishawna is using Smore newsletters to spread the word online.

Get email updates from Tishawna:

Bacon's Rebellion was an armed rebellion in 1676 by Virginia settlers led by young Nathaniel Bacon against the rule of Governor William Berkeley. The colony's disorganized frontier political structure combined with accumulating grievances.

Including leaving Bacon out of his inner circle, refusing to allow Bacon to be a part of his fur trade with the Indians, Doeg tribe indian attacks helped to motivate a popular uprising against Berkeley. He had failed to address the demands of the colonists regarding their safety.

The alliance between former indentured servants and Africans against bond-servitude disturbed the ruling class, who responded by hardening the racial caste of slavery. While the farmers did not succeed in their initial goal of driving Native Americans from Virginia, the rebellion did result in Berkeley being recalled to England. 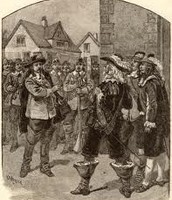 Tishawna is using Smore newsletters to spread the word online.