Faysal is using Smore newsletters to spread the word online.

Get email updates from Faysal:

For the following sections on counting, we need a simple way of writing the product of all the positive whole numbers up to a given number. We use factorial notation for this.

n factorial is defined as the product of all the integers from 1 to n (the order of multiplying does not matter) .

We write "n factorial" with an exclamation mark as follows: n!

An efficient way of counting is necessary to handle large masses of statistical data (e.g. the level of inventory at the end of a given month, or the number of production runs on a given machine in a 24 hour period, etc.), and for an understanding of probability.

In this section, we shall develop a few counting techniques. Such techniques will enable us to count the following, without having to list all of the items:

the number of ways,

Let E1 and E2 be mutually exclusive events (i.e. there are no common outcomes).

Let event E describe the situation where either event E1 or event E2 will occur.

The number of times event E will occur can be given by the expression:

Together there will be n(E1) × n(E2) possible outcomes of the two events. 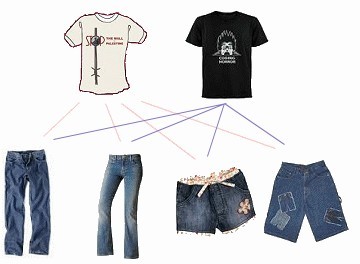 How many different combinations can you choose from 2 t-shirts and 4 pairs of jeans?

There are 2 t-shirts and with each t-shirt we could pick 4 pairs of jeans.

A permutation is an arrangement or ordering of a set of objects.

n distinct objects can be arranged in n! ways.

Example: In how many ways can a supermarket manager display

5 brands of cereals in 3 spaces on a shelf?

Theorem 4: Arranging Objects in a Circle

n distinct objects in a circle can be arranged in (n−1)! ways

A combination of n objects taken r at a time is a selection which does not take into account the arrangement of the objects, meaning the order is not important.

The number of combinations in which r objects can be selected from a set of n objects, where repetition is not allowed, is denoted by: nCr = n! ÷ [r! (n - r)!]

Suppose an event E can happen in r ways out of a total of n possible equally likely ways.

Then the probability of occurrence of the event is denoted by: P(E) = r ÷ n

When an experiment is performed, a sample space of all possible outcomes is set up.

In a sample of N equally likely outcomes, a chance of 1N is assigned to each outcome.

The probability of an event for such a sample is the number of outcomes favorable to E divided by the total number of equally likely outcomes in the sample space S of the experiment.

n(E) is the number of outcomes favorable to E

n(S) is the total number of equally likely outcomes in the sample space S of the experiment.

Example: A card is drawn at random from a deck of cards. What is the probability of getting the 3 of diamond?

Faysal is using Smore newsletters to spread the word online.

Follow Faysal Madi
Contact Faysal Madi
Embed code is for website/blog and not email. To embed your newsletter in a Mass Notification System, click HERE to see how or reach out to support@smore.com
close