The team had only one practice together before their Thanksgiving Day debut. “I am so thankful to be a part of the Mid-American Pom Pon All-Star Team, and being able to have these experiences with my Hemlock teammates makes it even more special,” stated Junior Madison Fromholz.

Principal Keith Green noted, “I’m very proud of these young ladies, and I am thankful for their outstanding representation for our school district.” Hemlock’s Mid-American Pom Pon All-Stars will perform again in July 2020 at Disneyland and Universal Studios. 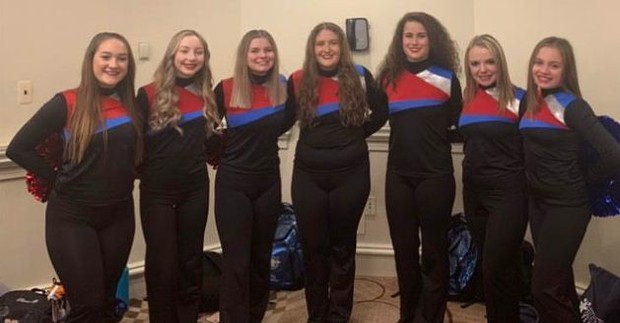 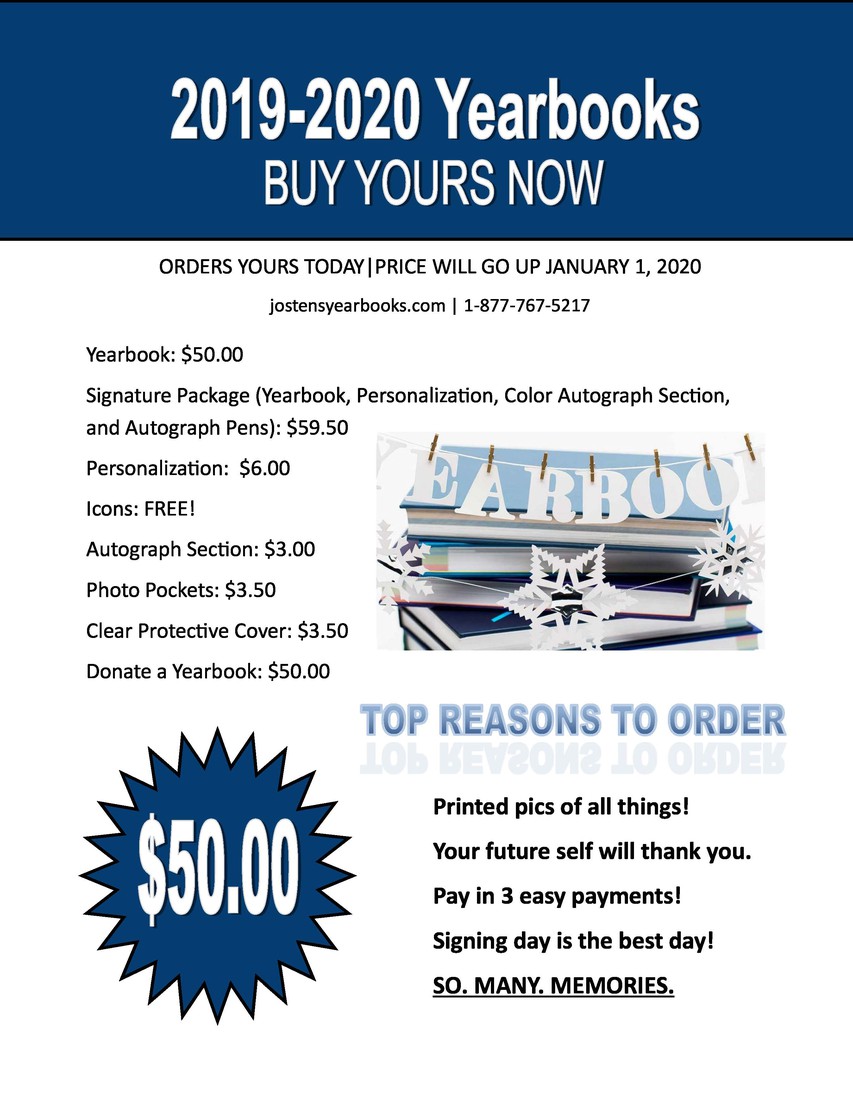 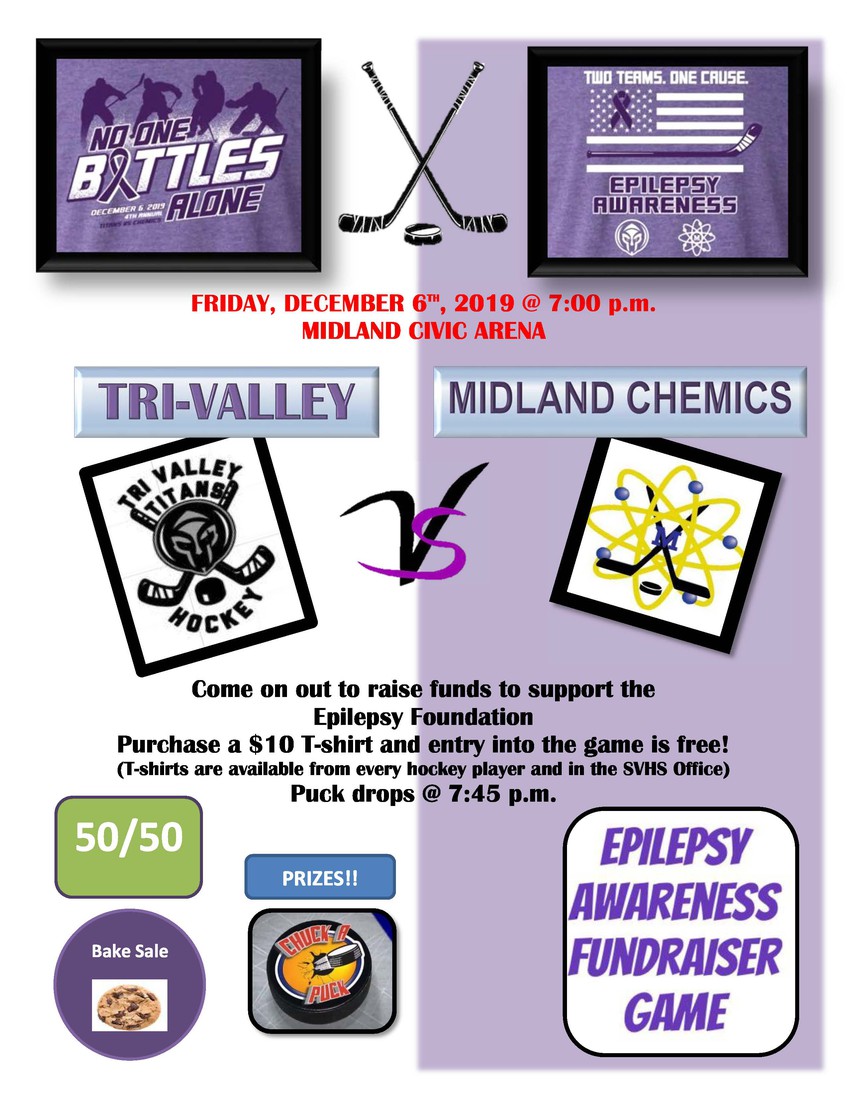 Hemlock Wrestling is having an apparel sale. The deadline to order is Friday, December 6th.

Are you Ready for Basketball?

The girls start this season with a home game against St. Charles. The 1st 100 fans will receive a FREE rally towel! JV games starts at 6pm followed by Varsity at 7:30pm. 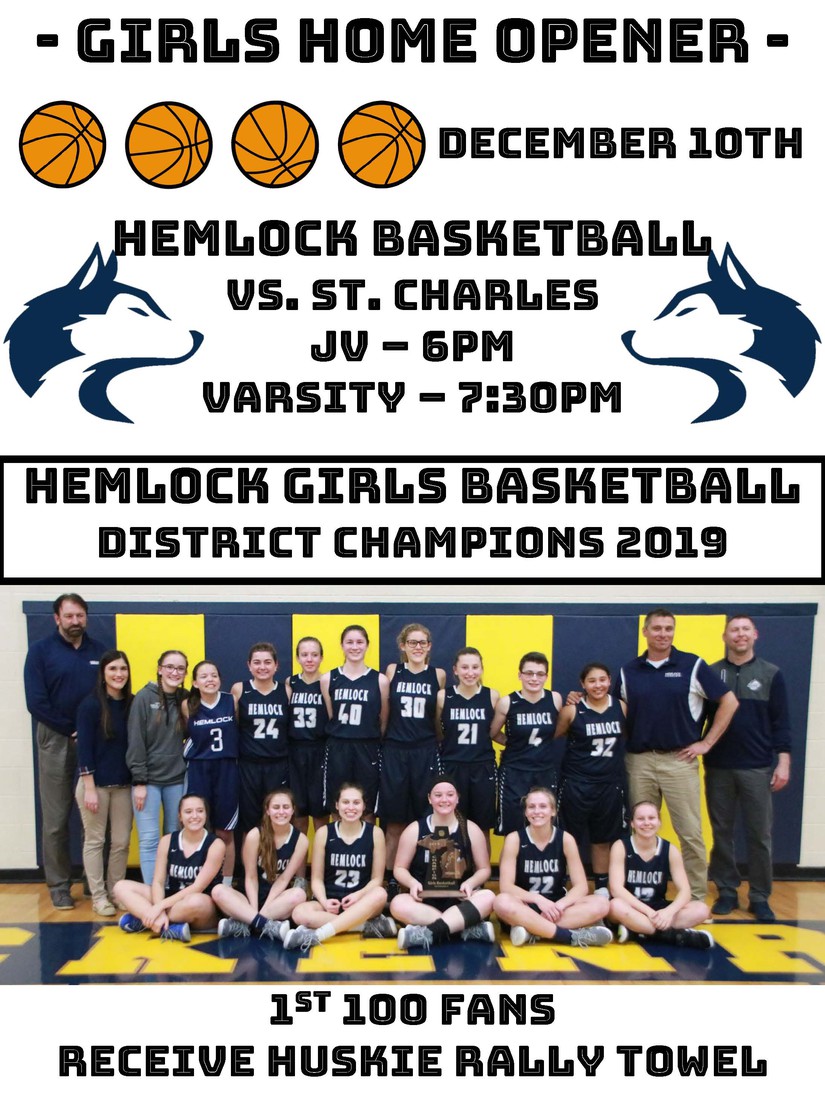 Beyond the Lights - Girls Basketball Preview

Introducing, the 2019-20 Hemlock Huskies’ Girls Basketball Team out of the TVC West.

How did last season finish up in the conference (conference champ, best few teams, etc.) and with your team? What was your overall record?
1st Place in TVC West (24-1 overall record)

It’s hard to predict the future, and with the conference realignments happening even more true, but which team(s) do you think may rise to the top of the conference this season? What about them makes you feel this way?
I think that Ithaca, Valley Lutheran, Nouvel, and St. Charles will all compete for the title. I’d like to think that we’ll be in the mix as well.

Who are the key returning players on your roster from last season? What are some of the things they do to make the team better?
Sydney Peake (Sr.), Kylee Ryder (Sr.), Cassidy Peake (Jr.). They are all tremendous leaders. Syd and Kylee are four -year varsity players. Cassidy is a third-year varsity player. Syd and Kylee give us size inside, defensive flexibility, and perimeter shooting. Cassidy is an outstanding ballhandler and defender at the point guard position.

Who is the up-and-coming player(s) on this years team you feel can make an impact at the varsity level? What makes you feel this way?
We have some key returning players, but we’re also very young. We have one junior, two sophomores and four freshmen on the team, all who are first-year varsity players. I expect freshmen Regan Finkbeiner and Chloe Watson to make an immediate impact for us. They are outstanding ballhandlers and shooters with high basketball IQs. Freshmen Breanna Turner and Averi Hall will also help us defensively and give us depth at the guard position. Reagan Keyser is a a sophomore who stands 5’11” and is a great athlete. She’s still learning the game, but I think she can be a factor for us inside by the end of the season. Sophomore Alex Grzenia is still learning the game, but she’s a tremendous athlete who gives us a lot of defensive flexibility. Alexis Guerrero is a junior who will provide depth for us as well. Senior Olivia Phillipson is a second-year varsity player, but she’s recovering from an injury, and it’s uncertain whether she will be able to play this season.

What are a few of things your team will need to do this season to be successful?
First, we have to stay healthy. After that, it all starts with our defense. We have to be able to defend at a level and standard that we’ve established over the last few years in our program. Our young players will need to grow up pretty quickly and learn to adjust to the speed and strength of the varsity game. We’ll likely struggle early, but I think by the end of the season, we could be a very good team. We have more depth, shooting, and ball-handling than we’ve had in a long time, and that should help us as the season progresses.

What is your favorite thing about coaching high school athletics?
I love to see the development of the kids – not only as players, but also as individuals. I enjoy watching a group of individuals come together and learn to sacrifice for each other and become a cohesive unit as they pursue their goals.

Student Council has decorated our school for the holidays and would everyone to participate in spirit week December 16th - 20th. See below for the theme days. 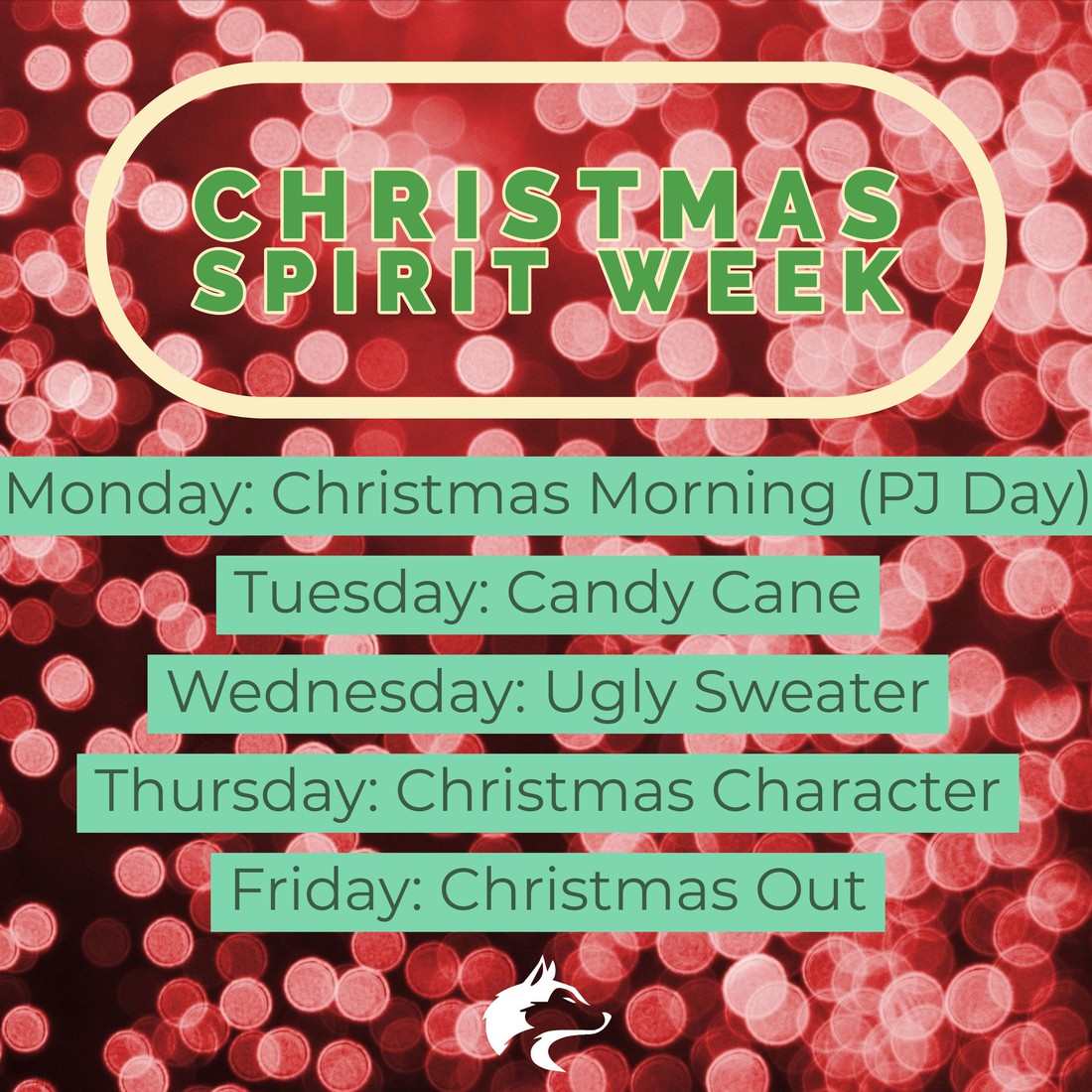 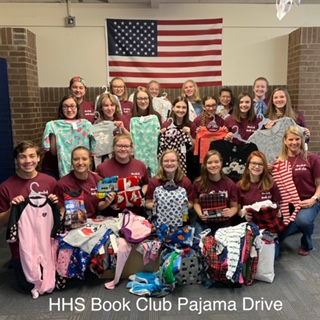 HHS Book Club is going to run a Pajama Drive Nov. 18-Dec. 6. This is an exciting program that Scholastic Books sponsors. We donate NEW pajamas and Scholastic donates books to match. The pajamas can be any size (infant to adult) but must be NEW! The pajamas can be sets (top and bottoms) or nightgowns. If you buy a package of pajamas with more than one pair in a package, they will all count separately.

Mrs. Whitford is offering the 4th hour class that donates the most a "Whitford Waffle Breakfast". 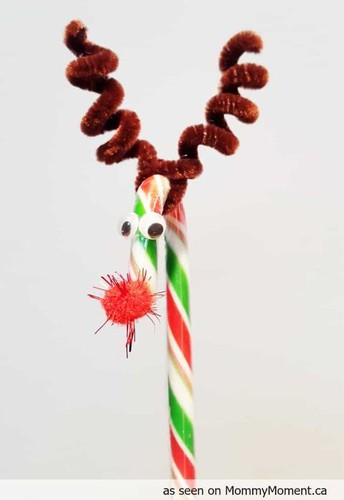 HO! HO!! HO!!.....ORDER your REINDEER GRAMS now through FRIDAY, Dec. 6th. We will deliver your orders to all buildings in our district. All you need to do is complete each gram and place it in an envelope with the correct amount of money……50 cents per each gram ordered. Gram collection box is located by the office door. So……….remember to order all of your Reindeer Grams by the end of the day on Friday, Dec. 6th. Deliveries will be made to the week of Dec. 16th thru 20th. HAPPY HOLIDAYS!!

Please join us for our Winter Wonderland Night on Friday, December 20th for basketball and Christmas cheer! Santa Claus himself will be here in the lobby 5:30-7:30pm. We will also hold a drawing for some presents! 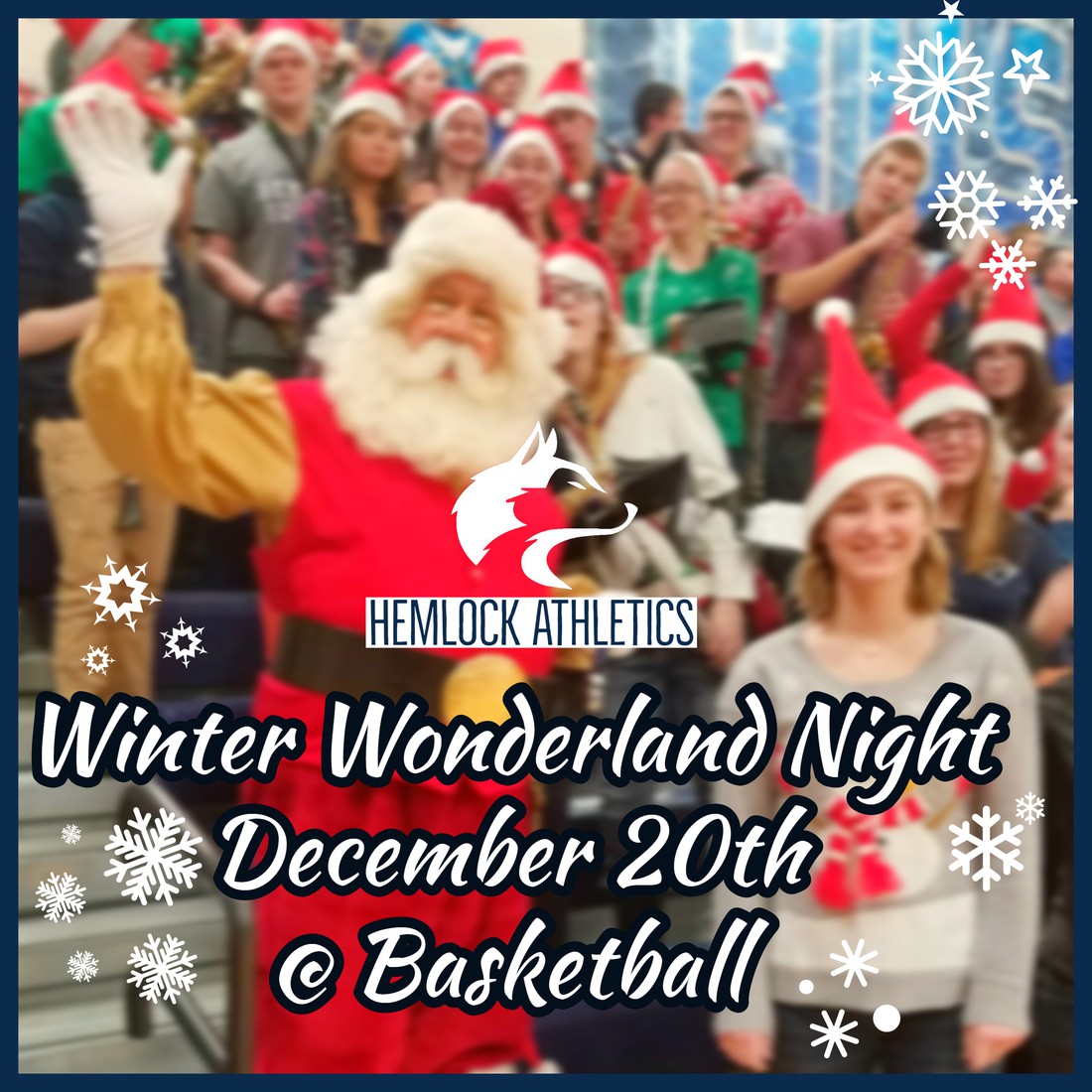 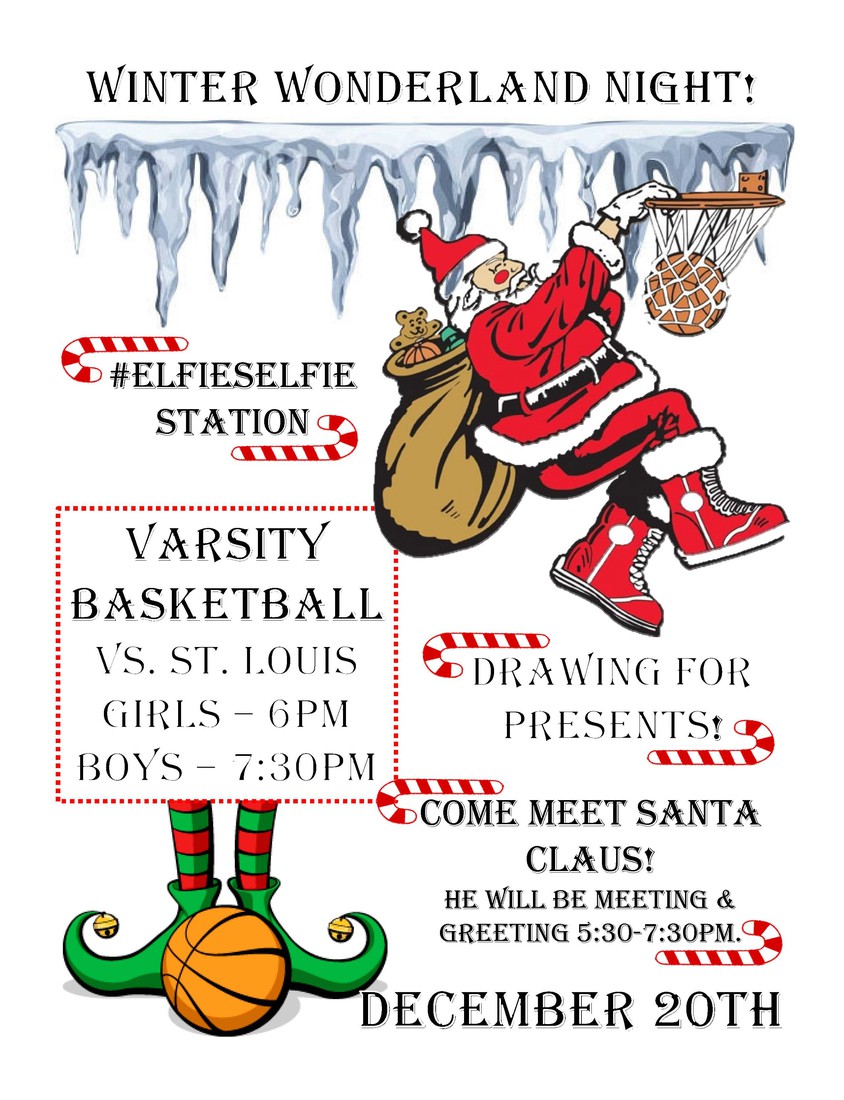 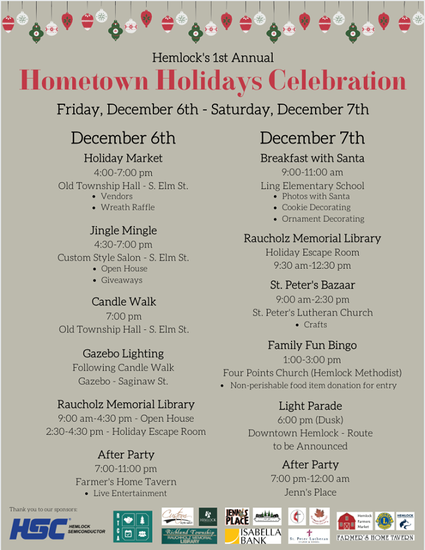 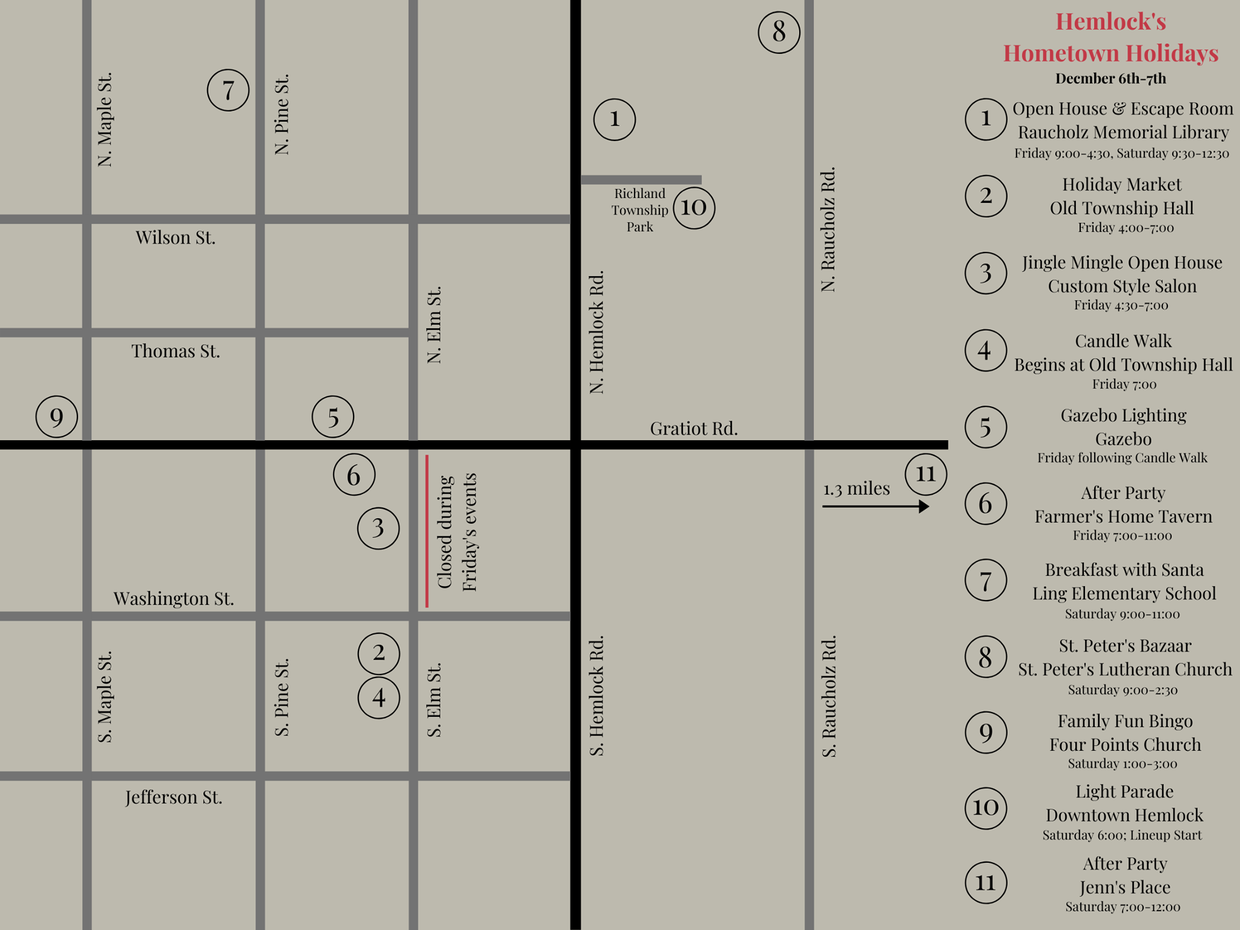 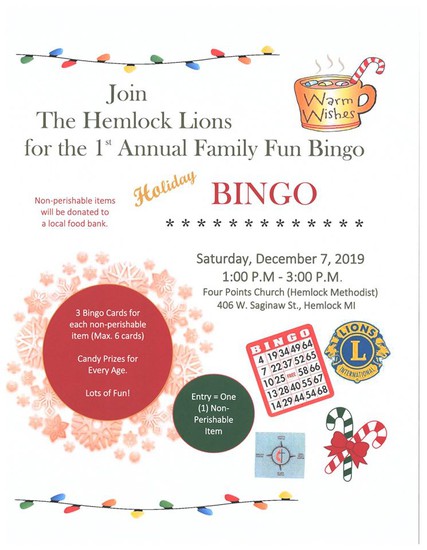 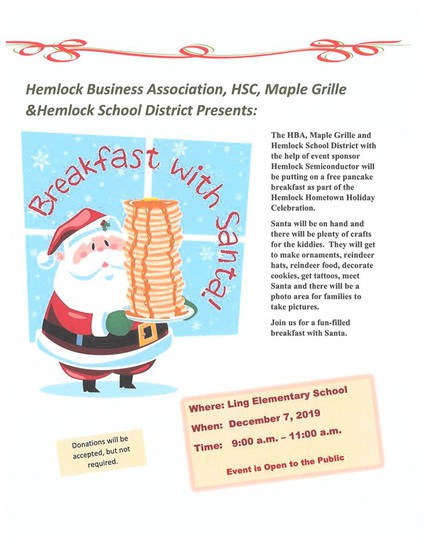 The HHS Drama Club will be showing "How the Grinch Stole Christmas" movie in the high school auditorium as a fundraiser for some new wireless microphones. It will be held on Saturday, December 7th from 3-6pm. Cost is $5 a person which includes a popcorn. Water and baked goods will be available for purchase. There will also be a raffle drawing. 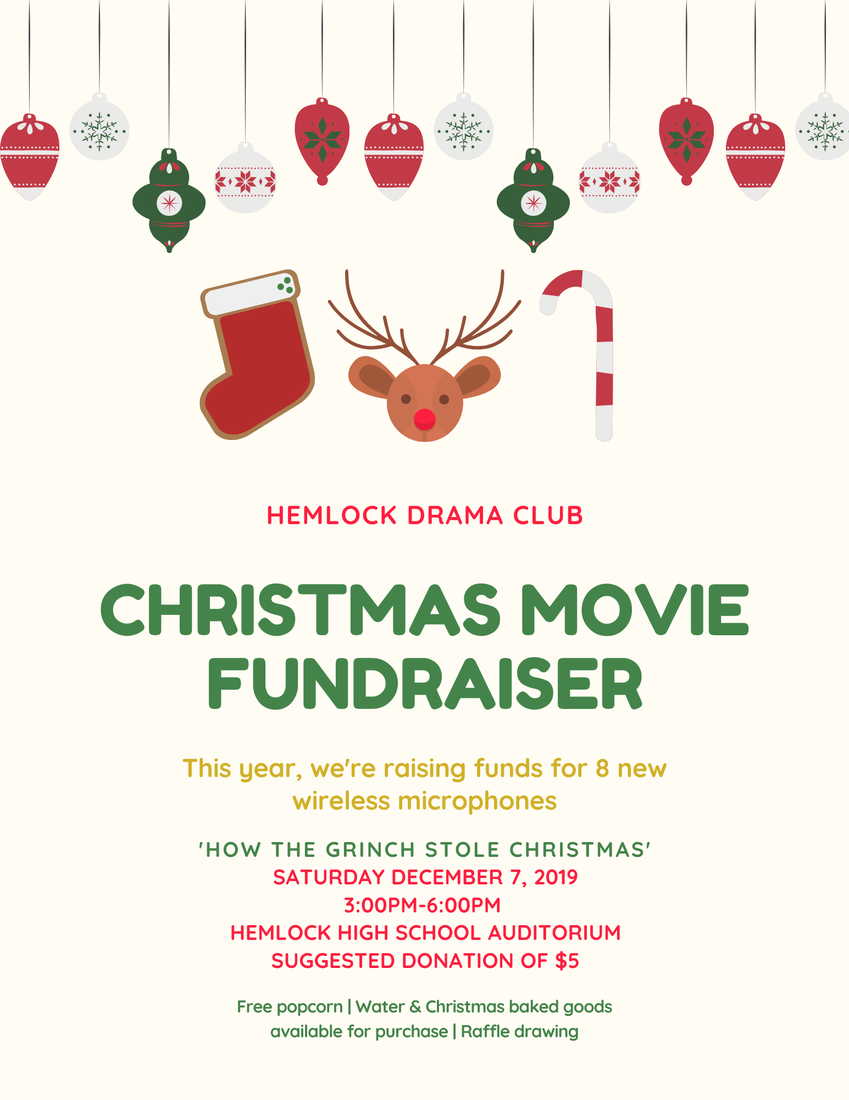 Our Hemlock Business Association wreath is up, and tickets are available for purchase at our 200 Wilson Street office. Tickets are $1 a piece or 7 tickets for $5. Let's Go Huskies! Winner announced on Friday, December 6th, at the Hometown Holiday Celebration. 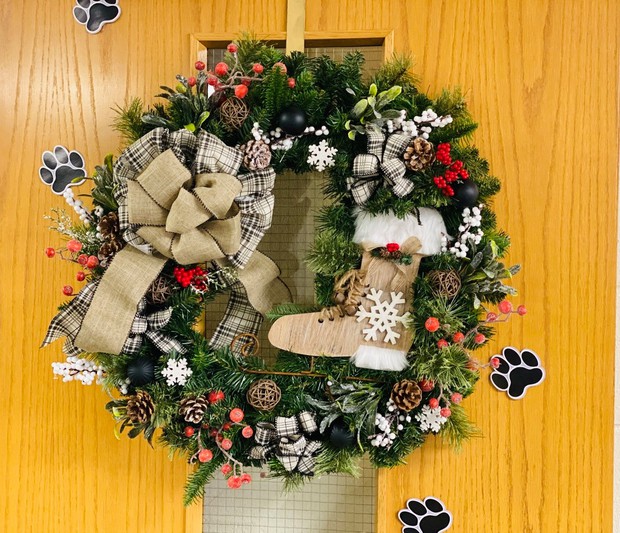 We have a box located in our front lobby by the office for those wanting to drop off a new, unwrapped toy. The toy drive is going on now thru December 13th.

For more information, you can visit their website at https://www.toysfortots.org/. 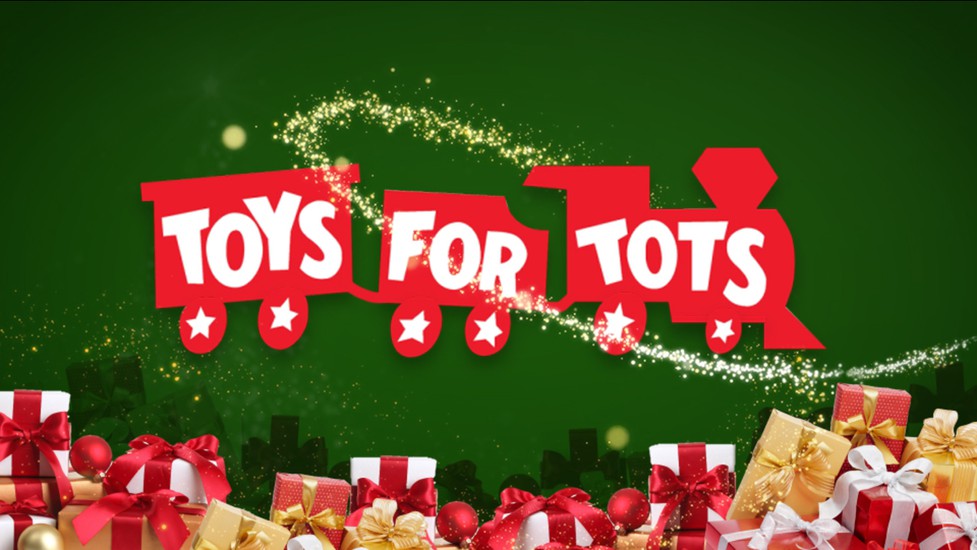 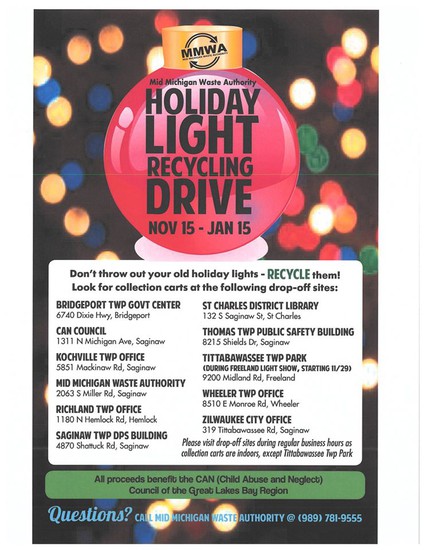 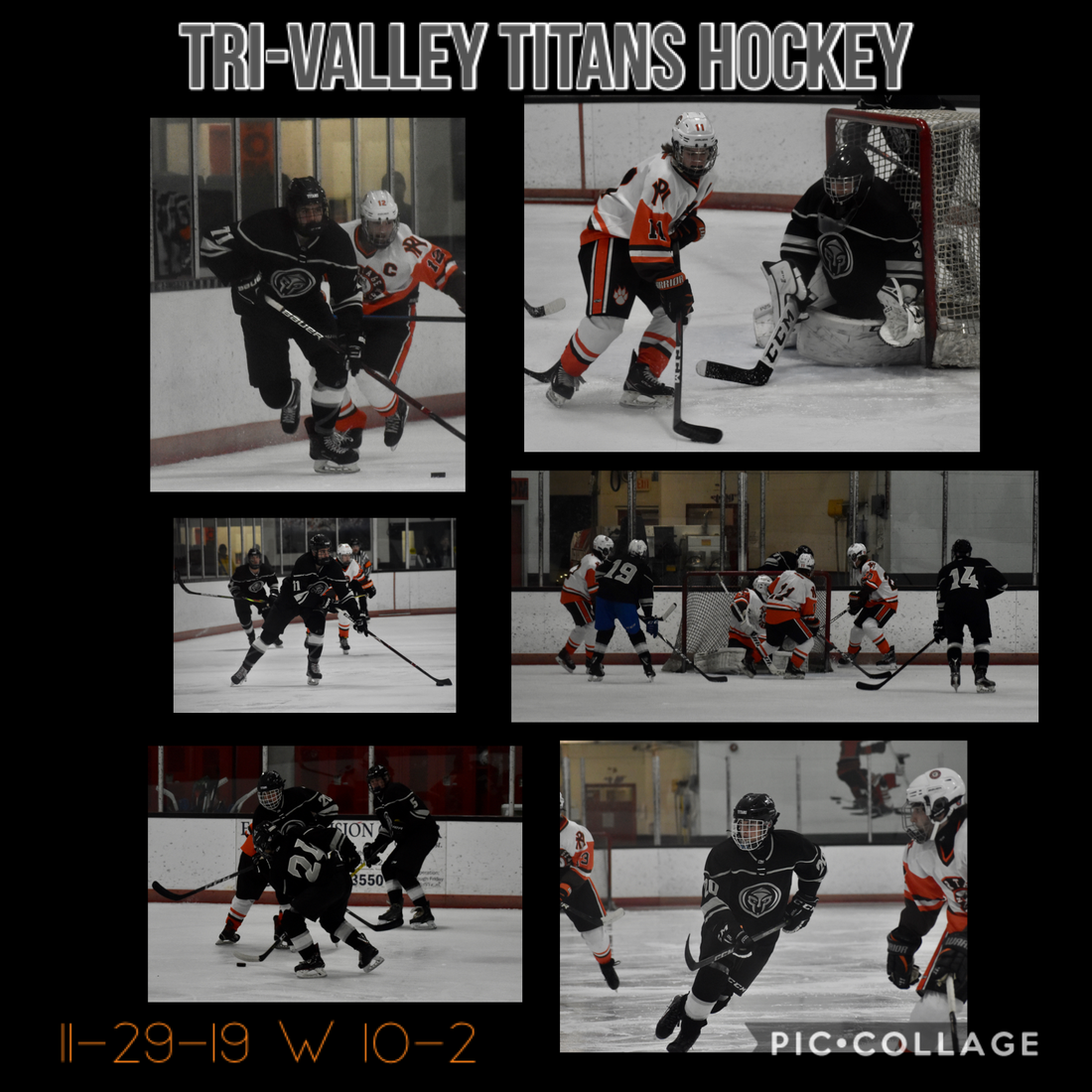 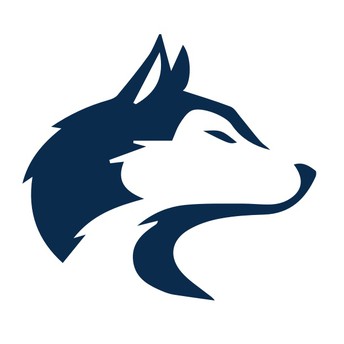