Walter Elias "Walt" Disney was born on December 5th, 1901. He was born in Chicago, Illinois. His parents were Elias Disney and Flora Call Disney. His father was an Irish-Canadian by descent and his mother was a German-American. He had four siblings, three brothers and one sister. At the age of four, he shifted base to Marceline, Missouri, with his family. It was here that he developed his life-long fascination for drawing and painting. The family moved moved to Kansas City in 1911 where he received his early education.Walter Pfeiffer, theatre aficionado, became an early guiding light for him as he introduced young Disney to a world of vaudeville and motion pictures. Moving to Chicago in 1917, he enrolled himself at the McKinley High School. At night, he used to attend course at the Chicago Art Institute. He worked as a cartoonist for his school newspaper. Soon, he dropped out of school to join the army but was rejected because he was underage. He then served as the driver or an ambulance for red cross. Walt's "pals", "doc" Sherwood, "grandpa" Taylor, his grandmother and his aunt was the first people to encourage Walt's artistic abilities. He entered into a business deal with a local theatre owner, Frank L Newman to screen the cartoons which he named, Laugh-o-Grams. The popularity of the cartoons led to the opening of Laugh-o-Grams studio. However, financial debt caused the closure of the studio in 1923.Impervious to the bankruptcy, he aimed to set up a studio in California. Together with his brother Roy, and Iwerks, he opened Disney Brother’s Studio.They entered into a distribution deal with New York distributor Margaret Winkler for Walt's 'Alice Comedies', an animated shorts based upon ‘Alice's Wonderland’. They invented a character, Oswald the Lucky Rabbit for which they contracted the shorts at $1,500 each.

In 1925, he recruited ink-and-paint artist Lillian Bound, little knowing then that the two would become lifelong partners.The dream-run for Disney ended in 1928 when he realized that Universal Pictures had bought the trademark for Oswald and that most of his creative designers, except Iwerk, had forsaken him for the Universal Pictures.Together with Iwerk, he worked on creating a new character, based on his pet mouse which he adopted during the Laugh-o-Gram days. The final touches to the sketch gave the world of animation a new character in Mickey Mouse.While the first two animated shorts did not bring Mickey Mouse much fame due to them being silent movies, the third short, was sound and music equipped became an instant success and created a sensation. Walt gave his voice for Mickey.After the supper success of Mickey’s third short, Streamboat Willie, he launched sound in all of his subsequent cartoon.

-Walt experienced bankruptcy after the failure of a cartoon series in Kansas City. He headed to Los Angeles with $40 in cash, and an imitation-leather suitcase containing only a shirt, two undershorts, two pairs of socks and some drawing materials. Feeling that others did animation better, his goal was to be an actor out in Hollywood. It never occurred.

-In the early 1930s, Walt suffered what he called, "a heck of a breakdown." He was anxious about the ability for cartoon shorts to really deliver serious profit. Beyond being irritable at his employees, that breakdown included sleepless hours in bed at night. There were story sessions where he was completely unfocused and unable to contribute. He would even plunge into crying spells at a moment's notice. At the urging of others, he and his wife took a second honeymoon by going on a long-anticipated voyage down the Mississippi River. But when they arrived at the St. Louis waterfront, they found out that the Great Depression had wiped out the passenger trade. They had to go elsewhere to vacation.

A visit to Children’s fairyland in Oakland inspired him for the concept of Disneyland. After five years of immense planning, projecting, fund raising and execution, the grand opening of Disneyland Theme Park took place on July 17, 1955. The park primarily gave children and families to explore the world of fantasy. 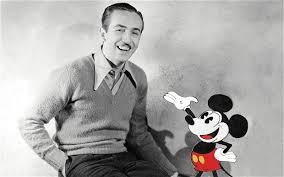 "All the adversity i've had in my life, all my troubles and obstacles, have strengthened me... You may not realize it when it happens, but a kick in the teeth may be ht ebest thing in the world for you" -Walt Disney