Shyann is using Smore newsletters to spread the word online.

Get email updates from Shyann:

Should not be a holiday!!

Should not be a holiday!!

"Gold is most excellent; gold constitutes treasure; and he who has it does all he wants in the world, and can even lift souls up to Paradise." -- Christopher Columbus, 1503 letter to the king and queen of Spain.

Columbus claiming land that belongs to the Taino indians.

Columbus and his men celebrating their "discovery"

So what is the full story?

Columbus was a Murderer!!!

Columbus negotiated a business contract with King Ferdinand and Queen Isabella of Spain. This contract stated that Christopher Columbus could keep 10% of all profits. Columbus and his men enslaved native inhabitants of the West Indies, forced them to convert to Christianity, and subdued them with violence in an effort to seek these riches.
Christopher columbus treated the natives (Taino Indians) very poorly. Columbus killed many Taino people. He ordered every Taino at the age 14 and older to find him gold. The Tainos looked, and looked but couldn't find enough gold. For not finding enough gold, Columbus punished the Tainos by mostly cutting off their hands, and make them be his personal slaves. Christopher Columbus was a very mean and scary person to the Taino Indians. The Tainos thought of Columbus as a villain coming to their land. 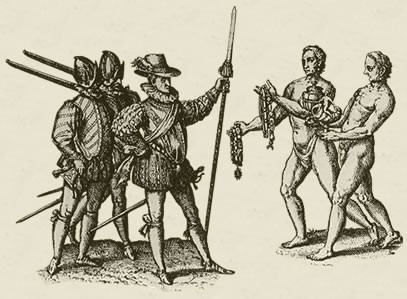 Shyann is using Smore newsletters to spread the word online.

Follow Shyann Uphoff
Contact Shyann Uphoff
Embed code is for website/blog and not email. To embed your newsletter in a Mass Notification System, click HERE to see how or reach out to support@smore.com
close