Jim Collins (Good to Great) is often quoted about the bus, getting people on the bus, driving the bus, etc. But people often don’t talk about the hedgehog concept. Catholic schools do one thing really well—build community. In a wide variety of Church documents, the Church calls us to build faith communities and communion within our schools. What I often hear is schools saying, “Yes, we do the community thing already. We got that down. So let’s focus on our test scores.”

Balderdash! I suggest we double down on community and become even more intentional. One such strategy is the House System catching on in our high schools. More common in England (and Hogwarts!), the House System was brought to Chaminade High School (St. Louis) in 2002 by a group of students on a Marianist exchange program to Australia. The students wanted to bring this to their school. Interesting sidenote—when the House system began in English boarding schools, those schools were pre-Reformation Catholic. So there are actually Catholic roots to the system!

The House System has spread to at least 52 Catholic high schools. Stop what you are doing right now and watch this video about the House System from Cincinnati’s Moeller HS. It is so good that if you watch it, you can skip the rest of this blog! Notice the video talks about formation right away. The House System is not designed to primarily promote school spirit, rather it is about providing a sense of caring and belonging to all students. Students are randomly placed in a House where they stay all four years. They can compete against other houses, yes, and I imagine at all-boys schools that might motivate most of the young men (!) but the program also provides mentoring, fellowship, and identity. At Moeller, the students join a homeroom under their House so they are spending time immediately with students from other grades.

Names of the houses are chosen to reflect and to establish a common identity—saints from the founding religious order, former teachers or principals, religious sites important to the school’s charism—as well as colors, banners, and crests all provide students with another identity.

Who would resist this great idea? Alumni have trouble buying in due to concerns that there might be more loyalty to the House rather than the class. Seniors resist because seniors resist all changes. The most conservative group in any high school, the senior class, wants every 9th-11th grader to have the exact same (sometimes miserable) high school experience. Faculty will often resist because faculty can resist changes.

There is a network forming. Moeller is putting on a summer conference on June 24th. Called the House System Institute #2, this student leadership summit is bringing together schools which currently use the House System as well as schools interested in implementing the program. More information here or email Moeller’s Director of the House System, Karen Matuszek at kmatuszek@moeller.org. More links:

· First, watch this video of the House System in action as the students from Archbishop Riordan HS (San Francisco) compete in a school-wide Rochambeau tournament. It’s 90 seconds and worth your time!

· Here’s a link to information and great background about Archbishop Riordan’s House System.

· Here’s the link to the Archbishop Moeller HS web page about the House System.

· Great article in the Marianist newsletter about the House System in Marianist high schools.

· Website and links about the House System at Chaminade College Prep HS (St. Louis) and Chaminade-Madonna HS (Florida) including names of each house.

· Link to information about O’Dea HS (Seattle)’s House system, including information on how the House names and crests were created.

· Link to information about Gross Catholic’s House System, including an explanation of the names.

· Link to my podcast conversation with Sr. Mary Jordan Hoover, OP, the founding principal of St. John Paul II HS in Phoenix (opening this fall) who designed the school to support the House system.

This newsletter is coming a few days after I blogged about Nicole Stelle Garnett & Margaret F. Brinig’s seminar work on the importance of Catholic schools in urban America, Lost Classroom, Lost Community. Tomorrow my podcast conversation with Garnett will drop. We’ll talk about the proven value of Catholic schools (spoiler alert—community) and the path forward.

Perfect Sense: A Common Sense Explanation of Why Each One of Us Needs to Attend Mass on Sundays and Holy Days

www.catholic365.com
It seems to be a common trend these days to think that attending Mass on Sundays and Holy Days is not really something that we as Catholics need to do.

FOCUS promises to 'fight for this generation' on college campuses

www.ncronline.org
While the rest of the Catholic Church is wringing its hands about the &quot;nones&quot; who have distanced themselves from organized religion, thousands of young people spent part of their winter vaca...

www.ncronline.org
David Hickson is a typical FOCUS employee: fresh-faced, enthusiastic and confident that he is doing God&#39;s work. However, unlike many of his colleagues, Hickson did not get introduced to the Fellow...

FOCUS plans to graduate to parishes with 'spiritual multiplication'

www.ncronline.org
About a thousand young Catholics, all alumni of FOCUS programs, get out of their seats and erupt into conversation and laughter in the middle of a presentation at the Fellowship of Catholic University... www.post-gazette.com
Six Catholic parishes in and around Pittsburgh’s North Side will become one. So will seven in the New Castle area and another six in the Upper Allegheny ...

‘Is my dad in heaven?’ little boy asks pope

cnstopstories.com
By Cindy Wooden  Catholic News Service ROME (CNS) -- After circling a massive, crumbling public housing complex on the outskirts of Rome, Pope Francis had an emotional encounter with the neighborhood's children. Question-and-answer sessions with youngsters are a standard part of Pope Francis' parish visits. And, at St. Paul of the Cross parish April 15,… 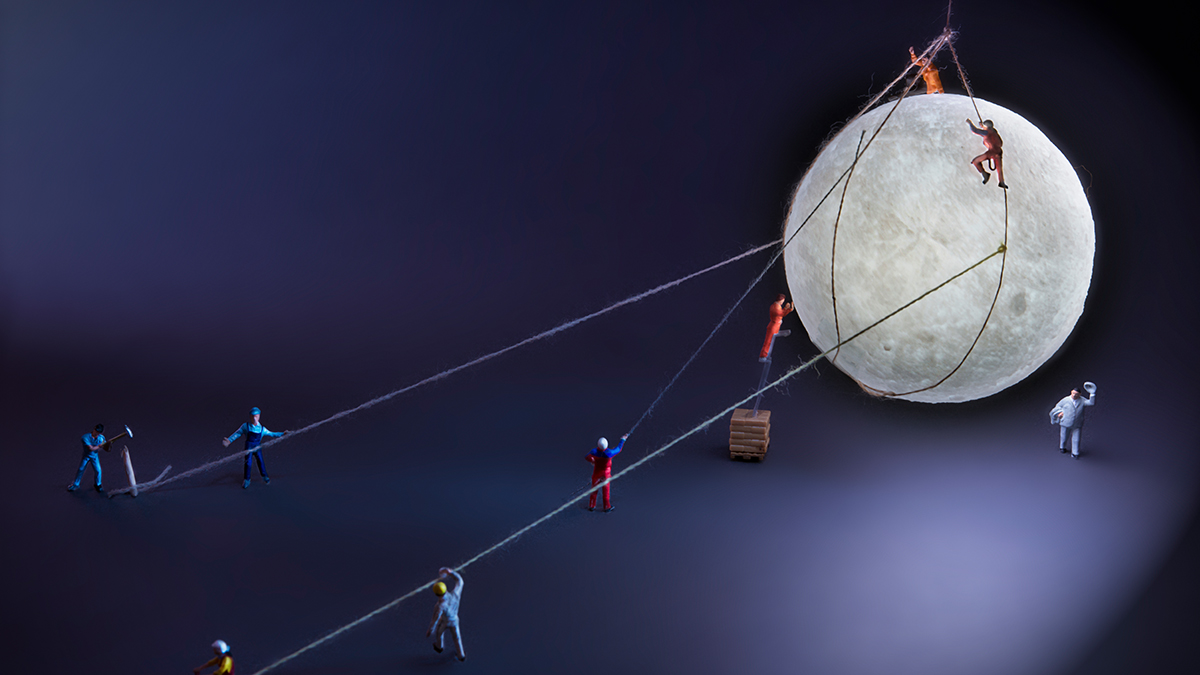 The Power of Leaders Who Focus on Solving Problems

hbr.org
Can you get people excited about the problems that excite you? 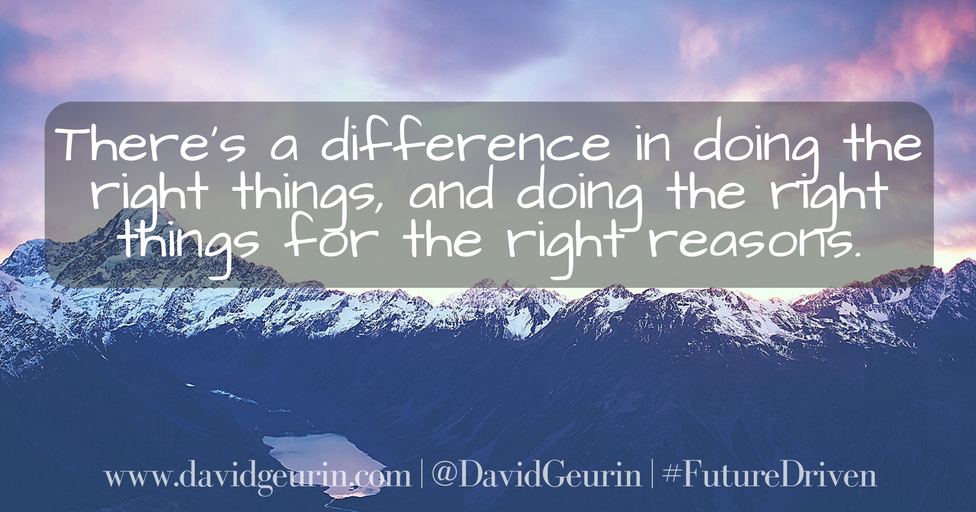 www.davidgeurin.com
Schools can be extremely orderly and run with precision and under the surface have a character deficit. I'm all for discipline, but I want to see that students are taking ownership for their behavior and can self-manage in positive ways. I want to see students empowered to do good and make a difference in the world. That won't happen in a culture of compliance. It will only happen in a culture of character.

giantleapconsulting.com
Good leaders answer their emails and practice direct communication. Check out these tips for how to improve the way you communicate to those who are counting on you.
CAPE May Outlook Tools for Project Based Learning: The Landscape Today | Getting Smart

www.gettingsmart.com
The spread of access to low-cost devices holds great promise for giving more students high quality project based experiences, but tech has yet to become a panacea for the challenges of PBL. In this post, we look at the recent history of PBL-oriented edtech, and draw some predictions about where it’s headed. 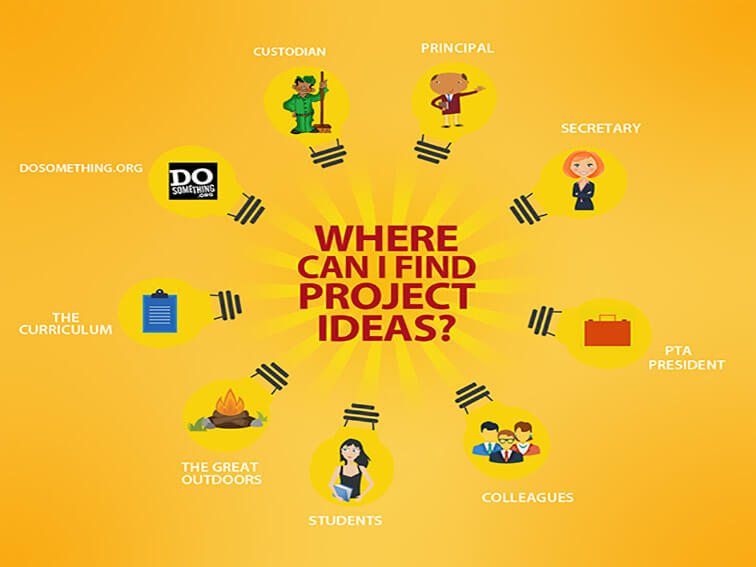 10 Conversations That Can Launch Project-Based Learning 4 Tools for Teaching Teamwork and Collaboration in the Classroom

www.kqed.org
Common Sense's Danny Wagner has a list of helpful tools that can help students better collaborate with one another while learning important skills.

teachersgoinggradeless.com
Sports as Metaphor Formative assessment and standards-based learning enthusiasts often seize on the metaphor of coaching to describe a better approach to feedback, assessment, and grading. I myself have employed this metaphor many times. Here’s a post I wrote a few months ago: This feedback cycle is not unlike the process used by coaches to prepare players for an upcoming…
Five Blog Posts about End of the Year Activities

How Much Homework Is Enough? Depends Who You Ask

ditchthattextbook.com
Summer is a great time to hone your skills and pick up new ideas for next school year. Here are some of my top picks for summer 2018 reading. 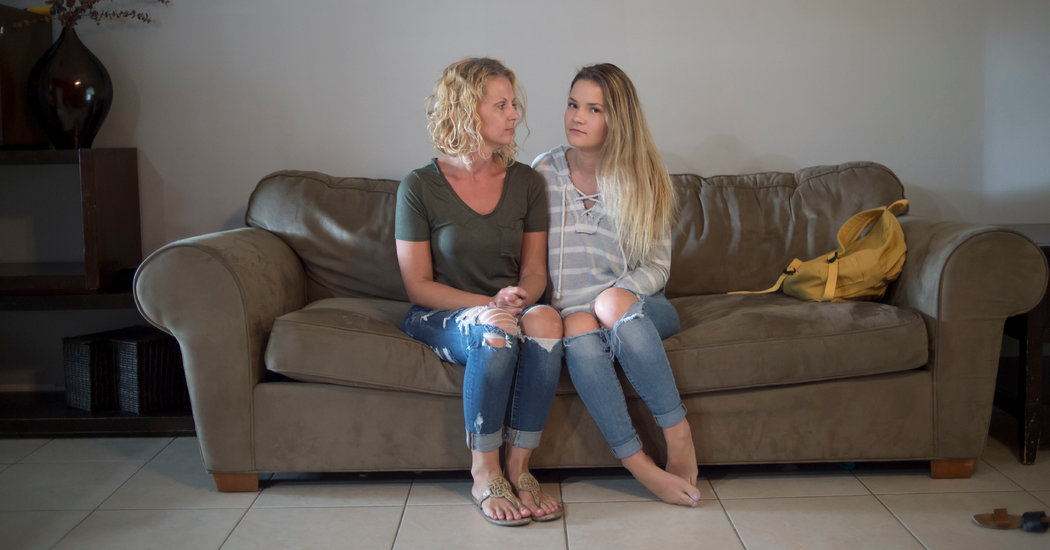 Is Your Body Appropriate to Wear to School?

www.nytimes.com
A high school junior in Florida was compelled to bandage her nipples at school. Where do school dress codes stop and start? 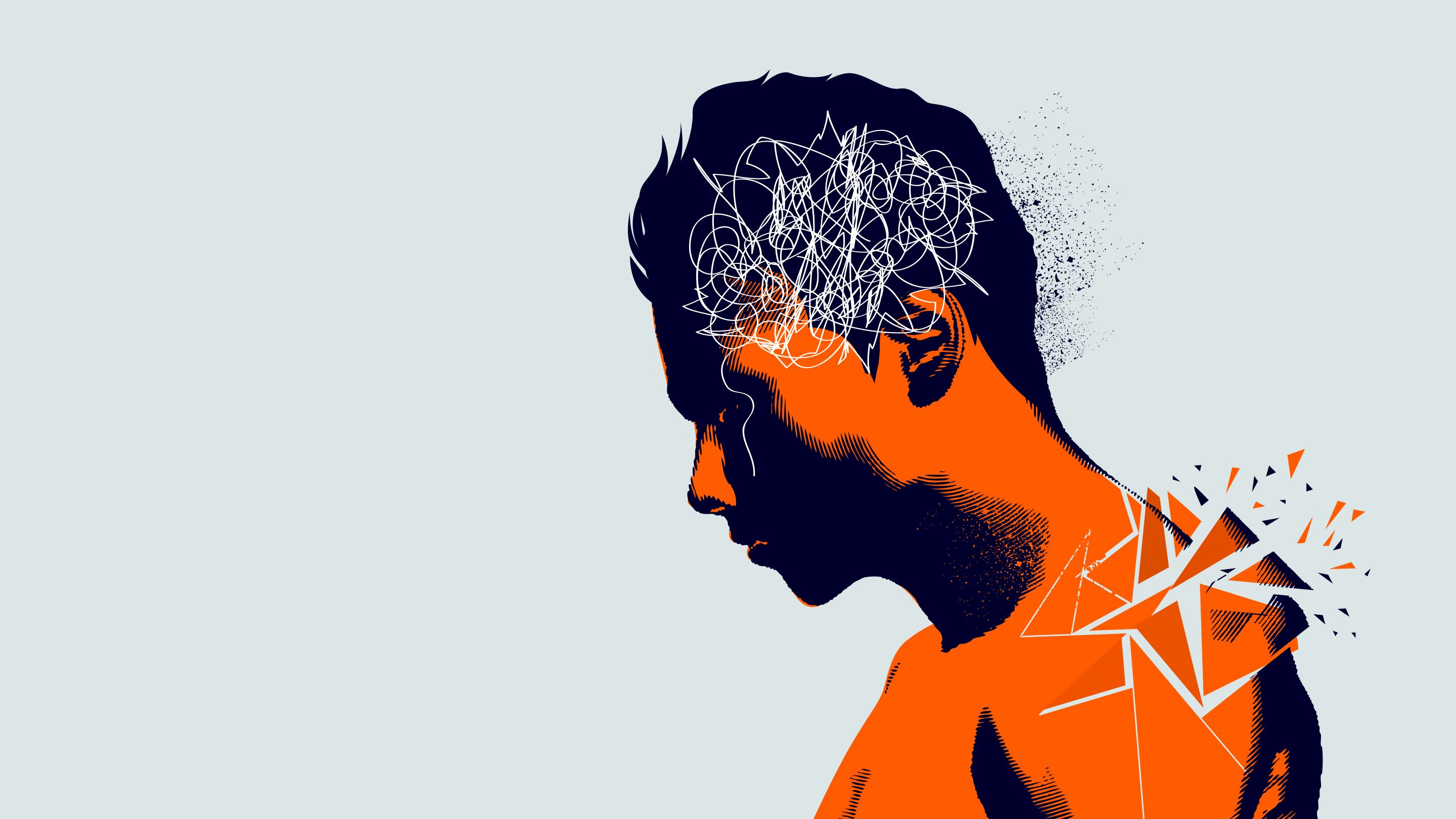 In High School, the Kids Are Not All Right | Edutopia

www.edutopia.org
With social and academic pressure mounting, a teacher shares what he’s learned about tracking his students’ mental well-being. Go Fast and Break Things: The Difference Between Reversible and Irreversible Decisions www.fs.blog
First Principles tinking breaks down true understanding into building blocks we can reassemble. It turns out most of us don’t know as much as we think we do. A Conspiracy Video Teaches Kids A Lesson About Fake News

www.kqed.org
Since 2016, an investigative journalist in France has been on a mission to show students how they're duped, teaching them how to tell true from false onlin 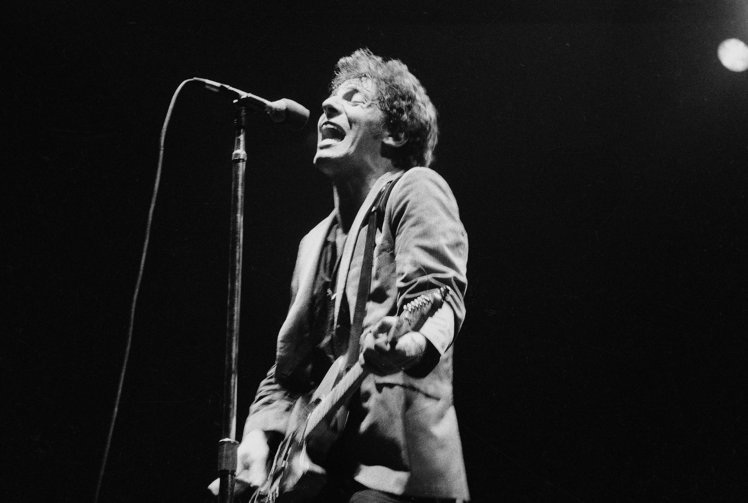 www.americamagazine.org
Andrew Greeley didn’t know how right he was about the Boss. 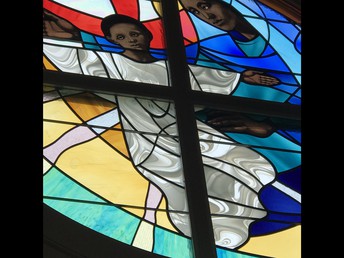 This week I'm off to LA for accreditation meetings and school visits. Tomorrow, my podcast conversation with Nicole Stelle Garnett drops. Garnett, who serves with me on the USCCB Committee on Education, was co-author of Lost Classroom, Lost Community and we discuss the findings of that must-read book as well as School Choice, Notre Dame, and other topics.

This week, I'll also release a podcast preview of the ICSL (Institute for Catholic Leaders) 2018 Convention. Four great presenters will preview their talks and we'll share why this July 15-18th event in Los Angeles is must-attend professional development for all Catholic school leaders.

Last week, my podcast conversation with Alicia Bondarella Simon of FADICA (Foundation and Donors Interested in Catholic Activities) dropped. Simon and FADICA was behind the influential 2015 publication "Breathing New Life Into Catholic Schools: An Exploration of Governance Models" as well as the recently-released marketing report. 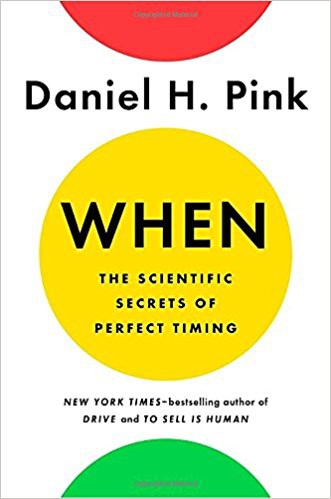 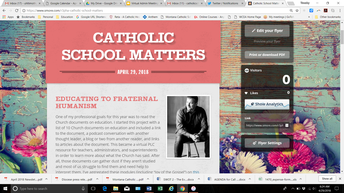