Kristina is using Smore newsletters to spread the word online.

Get email updates from Kristina:

Is a child's freedom an ingredient in chocolate?

In the past week, what have you eaten? I bet a piece of chocolate or a candy bar made its way to your stomach at one point. The ILO estimates up to 300,000 children in West Africa are forced to work in dangerous conditions to produce the cocoa that made the delicious sweet treat you ate. (Ivory Coast, 2004)

You didn't know? well, many people need to be educated on this problem. It is a very serious issue. There are also organizations you can get involved with.

Child labor in the chocolate industry is unfair and dangerous to the young children being forced to work, and it need to be stopped.

Children are being forced to work on cocoa farms?

After the children are smuggled into the Ivory Coast, they are sold to employers to work in dangerous conditions to make that chocolate bar you see everywhere. Children work hard, but are never paid, and cannot attend school. They are often locked up at night to prevent them running away. ( Ivory Coast, 2004 )

They must do many dangerous tasks such as clearing fields with machetes and applying poisonous pesticides to crops. This doesn't only happen on the Ivory Coast, but in many other places in Africa. ( Ivory Coast, 2004 )

The Ivory Coast is just a major contributor to the awful ways children are being treated. This is unjust treatment, and should be prevented and stopped. 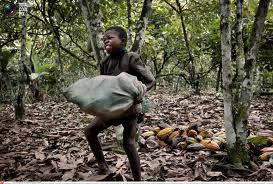 How do children end up as slaves?

Most children are kidnapped, and sold to be slaves. Not all children that work on chocolate farms as slaves were kidnapped, though. Some children are sold to the farms by, believe it or not, their parents. Why would a parent give up their child to slavery? Many parents do it because they need the money. This is due to high levels of poverty. ( Ivory Coast, 2004 ) Few children also choose to go to work on cocoa farms. ( Ivory Coast, 2004 )

No matter how they get there, children shouldn't be working in these conditions.

Why does it matter?

Everyone is human, including child slaves, meaning that they, too, deserve to have human rights.

What else should I know?

It is estimated that 4,000 children under the age of 15 years are used for spraying pesticides onto cocoa crops. Some children are required to carry and load extremely heavy cocoa beans onto trucks. The children most of the time aren't strong enough, which can cause hernias and spinal injuries. In a survey taken, it shows that almost 30% of child laborers say that they are not allowed to leave. 46.7% of the children surveyed had participated in a hazardous cocoa activity during the last cocoa farming season. ( Products of Slavery, 2013 )

How can I help?

Is your chocolate starting to lose that sweet taste? Make it return by buying from Fair Trade USA.

An organization called Fair Trade USA is a nonprofit organization that guarantee that the farmers and workers that produce Fair Trade products, such as chocolate, are paid fair wages and prices, work in safe conditions, protect the environment, and receive community development funds to empower their community. ( Fair Trade USA, 2013 )

Fair Trade is a great way to have all the products you love, whithout promoting child slavery.

Kristina is using Smore newsletters to spread the word online.

Follow Kristina Jones
Contact Kristina Jones
Embed code is for website/blog and not email. To embed your newsletter in a Mass Notification System, click HERE to see how or reach out to support@smore.com
close