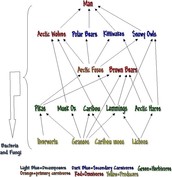 Factors in the Environment

"Arctic tundra is located in the northern hemisphere, encircling the north pole and extending south to the coniferous forests of the taiga. The arctic is known for its cold, desert-like conditions. The growing season ranges from 50 to 60 days. The average winter temperature is -34° C (-30° F), but the average summer temperature is 3-12° C (37-54° F) which enables this biome to sustain life. Rainfall may vary in different regions of the arctic. Yearly precipitation, including melting snow, is 15 to 25 cm (6 to 10 inches). Soil is formed slowly. A layer of permanently frozen subsoil called permafrost exists, consisting mostly of gravel and finer material. When water saturates the upper surface, bogs and ponds may form, providing moisture for plants. There are no deep root systems in the vegetation of the arctic tundra, however, there are still a wide variety of plants that are able to resist the cold climate. There are about 1,700 kinds of plants in the arctic and subarctic, and these include:
low shrubs, sedges, reindeer mosses, liverworts, and grasses
400 varieties of flowers
crustose and foliose lichen
All of the plants are adapted to sweeping winds and disturbances of the soil. Plants are short and group together to resist the cold temperatures and are protected by the snow during the winter. They can carry out photosynthesis at low temperatures and low light intensities. The growing seasons are short and most plants reproduce by budding and division rather than sexually by flowering. The fauna in the arctic is also diverse:
Herbivorous mammals: lemmings, voles, caribou, arctic hares and squirrels
Carnivorous mammals: arctic foxes, wolves, and polar bears
Migratory birds: ravens, snow buntings, falcons, loons, ravens, sandpipers, terns, snow birds, and various species of gulls
Insects: mosquitoes, flies, moths, grasshoppers, blackflies and arctic bumble bees
Fish: cod, flatfish, salmon, and trout
Animals are adapted to handle long, cold winters and to breed and raise young quickly in the summer. Animals such as mammals and birds also have additional insulation from fat. Many animals hibernate during the winter because food is not abundant. Another alternative is to migrate south in the winter, like birds do. Reptiles and amphibians are few or absent because of the extremely cold temperatures. Because of constant immigration and emigration, the population continually oscillates."