Nikola is using Smore newsletters to spread the word online.

Get email updates from Nikola:

The STSE issue that we're studying is waste. Waste can be in the form of compostable waste, recyclable waste, Greenhouse gas emissions, and disposable waste. The connection from waste to climate change is the greenhouse Gas (GHG) emissions. The waste in landfills contributes to approximately 3% of earths GHG emissions. When things biodegrade in a landfill in produces a gas called methane, which is 30 times stronger than carbon dioxide. This methane is released into the atmosphere to strengthen the greenhouse affect and heat the planet.

Waste isn't only the garbage we through away. It also has an impact on transportation (car, air plane, train etc.) and also when we turn on our lights or turn the TV on. Electricity is a contributor to waste and GHGs. For example, to get the electricity that you have in your home, someone must extract that material from the Earth, transport it to a plant where it's then created into nuclear energy and this produces electricity. Just this one form impacts our environment greatly. This is why some companies have switched to other forms of electricity/energy such as solar,wind and hydroelectric energy. 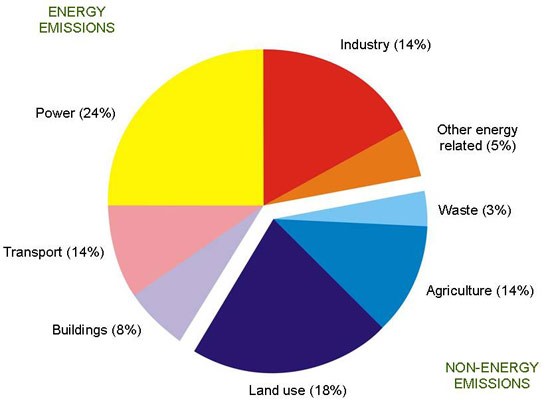 There are many people who are extremely powerful in this industry. They can change the path that our Earth is going on, but they choose not to for one simple reason, money. The profit on which companies make from waste is very large. These people benefit on non-reusable sources because you are forced to continue to buy from them. Some of these industries include:These groups of people can influence what we purchase, how much we pay for these products/services, and how much quantity of these resources we will have. Many of those listed above force you to buy more. Take phones for example. A new iPhone comes out every six months. This makes people want to throw away there perfectly good phones and buy a new one. Same thing with clothes. Everyone wants to be with the latest trend. 99% of the things we buy are thrown away within 6 months of being purchased.

We conducted a study of 20 males and 20 females. We handed them a survey with 5 questions having to do with waste. One of these questions was how often do you recycle paper. We felt this was important because recycling paper saves trees, one of earth's largest carbon sinks. The options to choose from were never, sometimes, often, or always. The results we got were graphed to see if there were a correlation between someone's gender and how often they recycle paper. We also included the total so that we could see where the highest frequency was as a whole.

The reason that there is less people who always recycle than often is most likely because people are lazy. Everyone has a recycling bin and everyone knows that paper is recyclable. The people are to lazy too walk to the recycling bin so they throw paper in the garbage which is closer. It is possible that the girls recycle paper more often because they are more conscious of the environment than boys. It makes sense that girls tend to recycle more often because they could be more aware on the negative aspects of waste.

One major weakness in our study was the lack of people we questioned. The results that we obtained could have been coincidences due to the small number of people that took our survey. Another weakness was that the study was very biased. It was given to mainly grade tens in one school. This gives us similar answers because we all live the same way.

To help raise awareness about all the negative impacts on waste we have made a twitter called the Erindale Waste Group. We post interesting facts and things we can do to make less waste. Follow us at @ewag123

twitter.com
The latest Tweets from Erindale Waste Group (@ewag123). Erindale's Waste Awareness Group. We give important tweets on how to reduce waste production for our school. MIssisauga, Canada

Climate Change and the Life Cycle of Stuff. (2014, March 18). Retrieved from http://epa.gov/climatechange/climate-change-waste/life-cycle-diagram.html#endoflife

Nikola is using Smore newsletters to spread the word online.