Shiva, the destroyer, is one of the three supreme gods in Hindu mythology. The other two are Brahma, the creator, and Vishnu, the preserver. Shiva's destructive powers are awesome, but they also have a positive side in that destruction usually leads to new forms of existence. In art, Shiva is often portrayed with four arms, four faces, and three eyes. A glance from the third eye in the center of his forehead has the power to destroy anything in creation, including humans and gods.

Shiva first appeared when Brahma and Vishnu were arguing about which of them was more powerful. Their argument was interrupted by the sudden appearance of a great blazing pillar whose roots and branches extended beyond view into the earth and sky. Brahma became a goose and flew up to find the top of the pillar, while Vishnu turned into a boar and dug into the earth to look for its roots. Unsuccessful in their search, the two gods returned and saw Shiva emerge from an opening in the pillar. Recognizing Shiva's great power, they accepted him as the third ruler of the universe.

Shiva is a complex god with many roles and powers. In his destroyer role, he often haunts cemeteries, wearing a headdress of snakes and a necklace of skulls. A band of terrifying demons, hungering for blood, accompanies him. 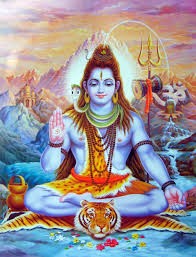 Indra was the ruler of the gods in early Hinduism. The son of the sky and the earth, he is a warrior god who protects people and animals and provides rain to water the land. In later Hindu texts Indra loses some of his power and his warrior characteristics. Other deities, such as Vishnu, take his place as defender of gods and humans, while Indra continues to serve as the god of rain.Indra appears as a central figure in the Rig-Veda, an ancient Indian religious text, and its many stories involve Indra's fights with demons. In a famous myth, he faces a demon named Vritra, sometimes described as a dragon or serpent. Vritra had taken all the waters of the earth and placed them in a mountain where he remained on guard. In the devastating drought that followed, the people suffered greatly from thirst and famine Legends about Indra describe him as riding either in a golden chariot pulled by two horses or mounted on a white elephant named Airavata. In addition to rainfall, a rainbow or the sound of a gathering storm indicates that he is present. 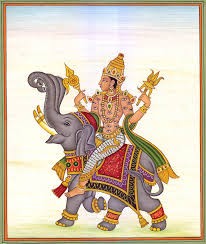 Varuna is one of the oldest gods. Varuna was originally a creator and the ruler of the sky. In the Vedas—the sacred texts of ancient India—he was a supreme, all-knowing deity who enforced the laws of the universe and human morality. He ruled the gods known as the Adityas. In later Hindu belief, Varuna became the god of water and was associated with oceans and rivers.According to the Vedas, Varuna created the heavens, the earth, and the air. He was responsible for causing rain to fall, rivers to flow, and winds to blow. The god watched over his creations from a golden palace in the sky. Varuna was the source of all truth and justice. He judged the actions of humans and punished those who broke the laws of the gods by tying them up in a rope that he carried with him at all times. This all-knowing deity also controlled the fate of humans and had the power to grant or deny immortality to some beings. In addition, Varuna guarded the kingdom of the dead, along with Yama, the god of the dead.In later Hindu belief, Varuna lost his supreme authority to the god Indra. Other gods took over many of Varuna's roles. Considered guardian of the west and ruler of the oceans and rivers, he became a minor deity. In Hindu art, Varuna is usually shown riding the Makara, a fantastic sea monster with the head of a deer and the legs of an antelope 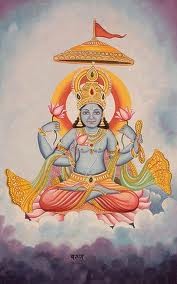 savitri is the name of several figures Hindu mythology. According to tradition, Savitri is a god of the sun who rides through the sky each day granting long life to humans and immortality to the gods. Savitri is also the wife of the god Brahma; together she and Brahma gave birth to the human race.Another Hindu legend tells the story of a princess named Savitri. She fell in love with Prince Satyavan, the son of a blind, exiled king. Although a holy man told Savitri that the prince would die within a year, she married him anyway. After a year, Satyavan went into the forest to cut wood, followed by his wife. There they met Yama, the god of death, who began to take the prince away.Touched by Savitri's devotion to her husband, Yama told her that he would grant her anything she wished. First she asked that Satyavan's father recover his sight and his kingdom. Then she asked that she might become the mother of 1,000 children. After Yama agreed, Savitri argued that she could not have children if her husband was dead. Impressed by the way Savitri had tricked him, Yama restored Satyavan to life. 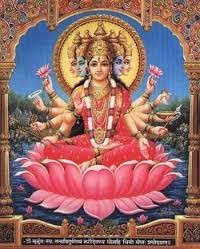