Star Stable is a game where you create a person and a horse. You can name yourself and your horse. You can walk, trot, canter, lope, and gallop. You can jump.(As a star rider) You will do tons of quests that take you through the country of Jorvik! Have fun star stabling!

When you start star stable you create your "starter horse." Your starter horse is a Jorvik Warmblood. As you level up in the game you can buy more breeds, colors, and styles of horses! 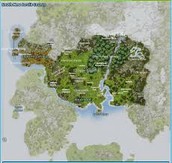 As a non star rider you can go to Moorland, Fourt Pinta, and the places around that. You can also do quests within those places. You can not jump or buy new horses. You will start with 200 star coins, but once they are gone no going back!!!! 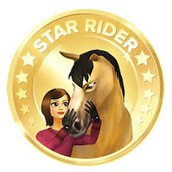 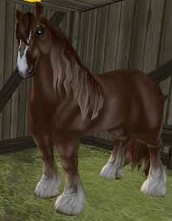 The Shire is the biggest Star Stable horse. They have very feathery fetlocks and long manes and tails. They come in these colors, Roan, Dapple grey, Black and White, All White, and off Black. You can buy these horses in the Cresent moon village, Fourt Pinta, and on Paddock Island in Jarlaheim! They are 949 star coins so save up!

The Friesian is a very popular star stable horse. They have wavy manes and tails. They have the same gates as a starter horse, but are much faster. They are sold at Steve's Farm by the Silverglade village. They are 950 star coins.

The Jorvik pony is a very lovable companion! Allthough they are not as fast as full sized horses they are definitely cute! They can take part in any Championchip but do best in the Pony Champoinchip. They are sold in Fourt Pinta (the pony barge), in the Valedale village and in some other places. They are usually 550 star coins some can go down to 350! Score!

The Morgan horse is one of the smallest horses in star stable, but they are not the slowest. They have very different gates and are super speedy. They are the same model as the Quarter horse. They are adorable! They are sold in Firgrove and some other places. They cost 750 star coins. They are totally worth the money! 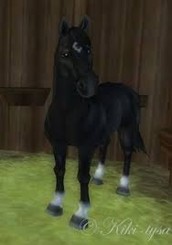 The American Quarter Horse is the fastest horse in star stable. They are totally cute and lovable. They are great at championships and races. They love food too. They are sold in Firgrove, and Fourt Pinta. They cost 890 star coins. STILL WORTH IT!

An Arabian lineage makes the English Thoroughbred a great horse for almost any equestrian discipline. The breed has forever changed the world of racing due to its capacity to maintain high speeds over great distances. They are 790 star coins not too shabby i'll say!

The Americn Paint Horse is said to stem from one of the horses that the Spanish explorer Cortez brought with him when he sailed to North America and they were popular with the Native tribes. They are dependable and very versatile. They come in three patterns: overo, tobiano, and tovero. The tobiano pattern has smooth-edged markings and white normally crosses the back. Overo is mostly colored with jagged-edged markings and white does not cross the back. Tovero is mostly white with jagged-edged markings.

The Appaloosa is another breed that stems from horses brought to North America by the Spanish. This particular breed was bred from those horses by the Nez Perce Indians that lived by the Palouse River, hence the name. The Appaloosa is a great family horse, since its versatility allows it to be used in almost any riding discipline.

Andalusians come from southern Spain and are descended from the Spanish horses of the Middle Ages. These majestic runners are used in all kinds of equestrian events. They are easy to train and sturdy with a friendly disposition that has made them very popular all over Jorvik.

The Arabian Thoroughbred is one of the most famous breeds in the world. They are lively, friendly, and very intelligent. The Arabian Thoroughbreds are descended from the horses used by the Bedouins that believed that their horses were a sacred gift from God. Arabian horses are muscular with small, strong hooves.

The Tinker Horse originates from Ireland. It’s a powerful horse with a calm temperament. The breed originates from the horses used by the wandering people in the old days to drag carts and wagons. The horse is friendly and easily trainable, known for its work spirit, and fits most uses.

The Tinker Horse is often pinto colored but exists in all colors. The size varies within the breed, some can be almost the size of a pony while others are the size of a work horse. One outstanding feature is the forceful hoof hair and the long mane and tail.

The North Swedish Horse evolved from the prehistoric forest horse that lived in northern Europe. The North Swedish is cold-blooded and was formerly used in agriculture and forestry but today it is also a popular riding horse. It is a versatile horse which is good at running, jumping, dressage, and western riding, but is also durable and very strong, which is great for pulling timber in the forest.

Fjord horses are small but very strong, with a very special mane which is often to be found cut into cool patterns. They have a fantastic temperament and are great with kids, making them a popular choice all over the world. Nobody really knows when Fjord horses came to Jorvik, but a popular theory is that they came with the Norwegian Vikings who ravaged the island. Some people believe that it’s quite the opposite, and that the vikings took the horses home with them to Norway from Jorvik. They believe that the lovely little Fjords originated from the tall and barren mountains of Jorvik, in the mythical Valley of the Kallters; a place spoken of in legend but that has never been found.

It was in the late 1300s that the Icelandic Horse was first brought to Jorvik by one of Iceland’s great horse breeders, Jokul Tómasson. Jokul had, together with his daughter Brynhildur, spent many years in the Ottoman Empire, working for the wealthy trader Asil Birdal. When Ottoman Emperor Murad I died in the summer of 1389, Jokul and Brynhildur decided to leave.

Since the 10th Century, it has been forbidden to return Icelandic Horses to Iceland once they’ve already left, so Jokul and Brynhildur would have had to leave their beloved horses behind if they were to return to their homeland. This could never be an option for them, and so they decided to take their horses to Jorvik one snowy wintery day at the end of 1389.

The Icelandic Horse quickly became very popular amongst the islanders and are used today for both leisure riding as well as competitive racing. Of all the wonderful qualities that make the Icelandic unique, the most famous has to be its special gait. In addition to the usual walking styles, the Icelandic Horse also has a unique gait called the ‘tölt.’

Connect with A S