Get email updates from Alana:

Effects of the Plague on the Church

Effects of the Plague on the Church

The Effects of the Plague on the Church

Many priests lost their lives to the plague because they frequently visited the infected. After the abatement of the plague, the church began promoting priests to fill in positions of power and to replace their losses. Many of the new priests were corrupt, as strict requirements were loosened. This also lead to the abuse of roles by the questionable candidates. The church lost a lot of authority, contributing to the Protestant Reformation.

Effects on the Faith of People Living During the Plague

People began to loose faith in the church because the church could not heal the sick as they had promised. The church explained the plague as God's punishment of sins on the people, and called for people to pray and plead to God in organised religious marches to stop the 'pestilence.'

The plague was carried by infected fleas, which would then bite. The infection would then spread through the blood, harming the victim. 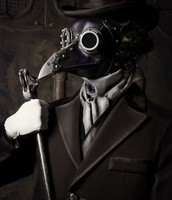 The plague killed so many people that they could not be buried fast enough. Many were left out on the street to be piled in mass graves.

Connect with Alana B