About the Amur Leopard

Amur Leopards can be found along the Amur River (Siberia) and in Manchuria, Korea. There is currently a population of only 30-35. The population has decreased from what it once was because of the amount of poaching and habitat loss. The Amur leopard can live in cold climates, and can also live in regions with warmer temperatures (from 77 to 95 degrees). Amur Leopards, like most leopards, can run up to 37 mph. They can also jump 19 feet horizontally, and up to 10 feet vertically.

Photos of the Amur Leopard

Habitat loss, loss of prey, poaching (fur trade), and trophy hunting are all threats to Amur Leopards. An undercover study was done in 1999, in which a male and female skin were recovered. The skins were being sold for $1000 and $500. Agriculture and villages around the habitat in which these leopards live make poaching a problem because people have easy access to the forests. The poaching doesn't only affect them because they are being killed, but so is their prey. 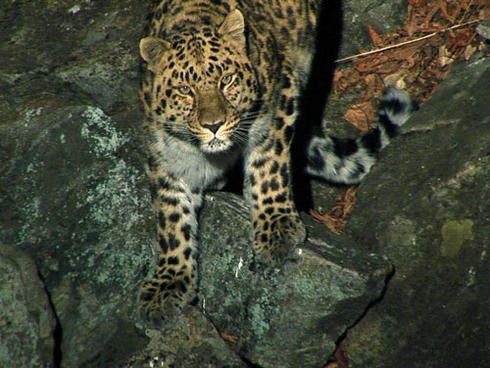 The existence of Amur-Leopards helps many other animals such as Amur Tigers, and their prey, like deer. They help balance the amount of deer to predators, so that the deer population doesn't get too high. There's not really a connection with our economy, however. Their main impact is controlling the populations of their prey.

WWF teams up with TRAFFIC, which is the world's largest wildlife trade monitoring network, to help governments make domestic and international trade restrictions for the Amur Leopard. Along with that 13 International and Russian NGOs (National Government Organizations) have created ALTA. ALTA's main anti-poaching team has been focused on the Amur Leopards habitat since 1998. ALTA has significantly decreased the amount of poaching being done. They have also provided much equipment to reduce possibilities of fires destroying the habitat of the leopards.

Read More About Their Conservation Here: