In December of 1773, Paul Revere and 60 other colonist all gathered around in Boston, Massachusetts. They had thought that the king was being unfair. He had made the tea have expensive taxes.

The next step of the way

As result, of raising the taxes , Revere and the 60 other colonist dressed up as native Americans and charged on to a British ship. They poor more than 6 chest full of tea. This was not only thing they did to try to prove a point. They also in some cities they canceled their tea order. 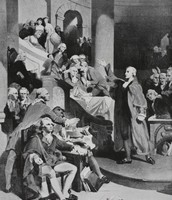