What You Need To Know Before Signing Up

What You Need To Know Before Signing Up

An unbiased review of ACN revealing the truth about why some call it a pyramid scheme while others feel it’s a legitimate business opportunity.

For years, people have been talking about all kinds of “get rich quick” schemes and “sure fire” ways to make money from home. From real estate speculation to ponzi schemes, many are left wondering if there actually is an ethical, moral way to earn either part-time or full-time income without going to work for someone else or spending massive amounts of capital to start a business.

One option is “direct selling” which has increased steadily over the past 10 years. According to the Direct Selling Association, an independent group focused on promoting ethics in entrepreneurism around the world, a record 20.5 million people in the U.S. were involved in some sort of direct sales venture in 2016, an increase of 1.5 percent over the previous year.

However, the cry continues to go up that these network marketing or MLM companies are nothing more than unethical “pyramid schemes” designed to steal money from those who get in late and “only those at the top” are making the money. And truly, there have been “here today, gone tomorrow” companies who have left thousands in debt holding on to only broken promises and useless products.

One company in the midst of these accusations is ACN with several former disgruntled associates pointing to a failed compensation system as a perfect example of a modern pyramid scheme. So what’s the truth? Is ACN an unethical ponzi or legitimate business opportunity? 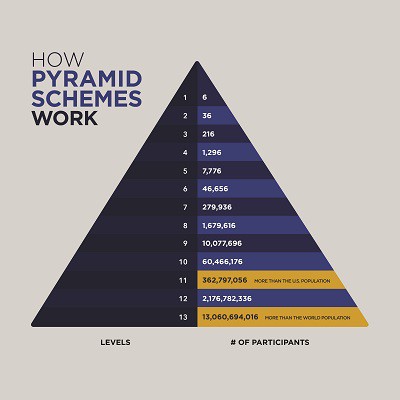 Some use the phrase “pyramid scheme” as a tool to frighten people away from something they do not fully understand. Some point to the fact that, in a network marketing environment, only those who “get in early” and are “at the top” of an organization are the only ones making money.

But, according to this definition, every major corporation in America would be a pyramid since those who “get in early” (like the founders of Microsoft or Google) make all the money. Does this mean these companies are a pyramid scheme? Surely, in every corporation, those “at the top” (i.e. CEO’s, presidents, vice presidents) make the majority of the money compared to those who work for them, and several of them started at the bottom and worked their way up.

Some also point to the structure of an organization to indicate it’s a pyramid. But again, this would indict every major corporation in the world as each has a CEO and/or President at the top with Vice Presidents under them and an ever-expanding base of Directors, Managers and staff under each. So looking at the structure of the organization is not a valid.

The Federal Trade Commission (FTC) defines a pyramid scheme as a program that promises “consumers or investors large profits based primarily on recruiting others to join their program, not based on profits from any real investment or real sale of goods to the public.” So the real “acid test” of a pyramid scheme is if you make money on selling products or just other participants in the plan.

What Does this Mean for ACN?

While most MLM companies today are peddling their unique brand of “pills and potions” that claim to cure everything baldness to acne, ACN is different. Looking solely at the product offering, you can see that ACN has a unique and distinct advantage in offering wireless services, gas, electricity and other utilities. These are products that people use every day while also looking to newer emerging technologies such as security systems and home automation as they become available.

So, just on the product offering alone, ACN could not be considered a pyramid scheme because all commissions are paid only when customers pay for these services. Another product advantage is that ACN associates need very little training to do so. With other companies, training is needed on everything from nutritional supplements and financial services to travel and skin care.

For 8 consecutive years, ACN has been listed as one of the top 20 direct selling companies in the world by the DSA. To be a member of the association, a company must go through a stringent screening process to ensure they enforce a strict code of ethics, which includes how their sales force is trained and compensated. This helps ACN stay in compliance with the FTC’s rules and guidelines as the DSA has higher standards than the federal government is asking for.

In addition, ACN has been around for awhile. Founded in 1993 by 4 entrepreneurs who have been able to guide the company through the changing advances in technology, Greg Provenzano, Tony Cupisz, Mike Cupisz, Robert Stevanovski have been at the head of the company all throughout its 24-year history.

If you are following the “litmus test” set down by the federal government, ACN is more than a viable network marketing company who has a product line that is in demand by virtually anyone. And, when you add in being one of the top 20 companies in the Direct Selling Association, you can be sure they follow a strict code of ethics that keeps them well above any remote consideration as a pyramid scheme but actually one of the world’s best income opportunities whether you seek full- or part-time income.
https://www.youtube.com/watch?v=rntxwxhW-Ek

Don't take my word for it, do your research!