The Battle of Highway 7

OHL Playoffs: It’s all on the line and it’s only on Rogers!

The Battle of Highway 7

OHL Playoffs: It’s all on the line and it’s only on Rogers!

Rogers TV, cable 20 has all the action as the Guelph Storm put it all on the line against Highway 7 rivals the Kitchener Rangers in the Western Conference Quarter-Final Series. Rogers TV extends its regular season coverage to bring fans live home and away game coverage of the Storm’s opening round of the 2013 OHL Playoffs. The series begins with Game One at the Kitchener Memorial Auditorium Friday, March 22 LIVE at 7:30 PM on Rogers TV, cable 20, only on Rogers. See complete series schedule below.

The Battle of Highway 7 renews as the Storm and the Rangers face off in their third-ever playoff series, the first since 2003 when Guelph was put out in five games by Kitchener on their way to their Memorial Cup win. The year prior, 2002, the Storm swept the Rangers in four games.

The fierce rivals, who finished the regular season just three points apart, head into the series each with a bench full of graduating players hungry to finish their OHL careers on a high, and solid netminders, the Rangers’ John Gibson and the Storm’s Garret Sparks, who were teammates during Team USA’s Gold Medal win at the 2013 World Juniors.

"Doesn't get more exciting than this"

“A playoff match up doesn’t get much more exciting than this,” says Charles Wechsler, Station Manager, Rogers TV. “Our team is poised to take viewers into the centre of it all with feature segments, interactive opportunities and up to the minute coverage of what’s happening on the ice and around the league.”

“Rogers TV’s game coverage brings an extra layer of excitement to our games and we look forward to this year’s playoff coverage,” says Matt Newby, Director of Business Operations Guelph Storm Hockey Club. “We know fans appreciate the ability to see the action as it happens both at home and on the road.”

Game one of the OHL Playoff Series: Kitchener Rangers vs. Guelph Storm on ROGERS TV.
Get Directions 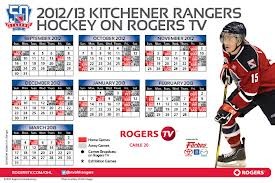 Facebook @rogerstv
Rogers TV is a unique TV channel where community members take an active role in conceptualizing and producing programming for local audiences. Our staff and volunteers produce informative and entertaining local programming, reinforcing Rogers’ commitment to the communities we serve. Rogers Communications is Canada's largest provider of wireless voice and data communications services and one of Canada's leading providers of cable television, high-speed Internet and telephony services. Rogers TV is only available to Rogers’ customers, including the company's 2.3 million cable customers in Ontario, New Brunswick and Newfoundland. For more information on Rogers Communications Inc., visit www.rogers.com.
rogerstv.com