A little glimpse of the past...

In 1959, we welcomed "The Aloha State" to the United States, however the history dates back to when Polynesians arrived on the island over 1,500 years ago. A few hundred year late the Tahiti's arrived bringing their beliefs and taboo's with them.

As land division conflicts began to arise so did the arts of hula and surfing.

Soon after Hawaii took over the name "Sandwich Islands" when Captain James Hook landed in the Hawaiian Islands in 1778.

During 1791, King Kamehameha united the islands, until his death a kapu system was in place. After Kamehameha's death his son decided to abolish the system.

To fill the hole Hawaii lost during this, a group of missionaries arrived 30 years later. 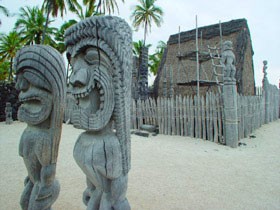 Hawaii's culture stretches south to the older areas of the Polynesians, along with the edges of Asia. The first people that reached Hawaii brought with them the culture and lifestyle of the Polynesians. Hawaii's culture began to take shape when it grew in response to Oahu' forests and coral reefs, along with offshore waters, valley's and steep summits.

The main subculture in Hawaii is that of Surfing. The surfing subculture includes the people, languages, and lifestyle that have influenced the sport. Surfing began to involve in Hawaii when the Polynesians came over in the 20th century. Between 1950 and 1960, surfing took a spike in Hawaii's culture. "Surfer Magazine, founded in the 1960's when surfing had gained popularity with teenagers, used to say that if they were hard at work and someone yelled "Surf's up!" the office would suddenly be empty." (Wikipedia). Soon after locals came to realize that the beach life had influenced surfers, and surfers had influenced the beach life. 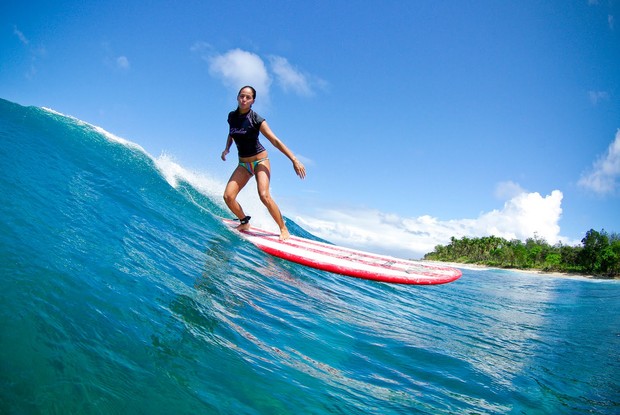 Weather and Geography of Hawaii

Geography: Hawaii is composed out of the remains of the volcanic lava when it hit the ocean. Today the only active volcano in located at the south side of the "Big Island," this volcano is referred to Kilauea by the locals. Hawaii is an archipelago that has been composed of 18 islands, of which 8 are the main ones. Those islands are: Niihau, Kauai, Oahu, Molokai, Lanai, Kahoolawe, Maui, and Hawaii.

Climate: Hawaii is located in the middle of a tropical zone, which means they have warm weather all year round. The temperature is generally between 91 and 64 Degrees Fahrenheit all year long. Snow is common at the top of mountains, and every once in a while the lower portion of the island could see snow too.

Must see places during your visit to Hawaii!

One'uli beach is unlike that of a typical black sand beach, this beach's whole geology story has been placed in front of your eyes, the sand has a large section taken out of it due to being cut away from the ocean. This black sand beach has smooth sand until you get the the ocean, it then turns into hardened lava. Even though the beach lacks area to sunbathe, it turns back into perfect when entering the water. Coral reefs are one of those perks, this area has been known to have green sea turtles also.

Diamond head is located on the eastern side of Waikiki's coastline. This crater was formed nearly 100,000 years ago during a major irruption. Vegetation and animals had returned in the 1800's-1900's. This site is so widely known today due to the historic hiking trails, military background, and the amazing views.

Hawaii's Waikiki Aquarium will have you looking eye to eye with animals that are surrounding you daily while in Hawaii. This Aquarium features 35,000 different types of aquatic animals. If being face to face with a zebra shark doesn't put you on edge, I don't know what will!

Wailua falls, located north of Lihue has been known as a long time "film location". The falls are up a three mile trail. Wailua Falls is so close that you can even see it from the roadside. You might want to make this the first stop of your day, so you can be treated with a rainbow making for an amazing photo opt.

The park is located 30 miles southwest of Hilo. The Volcanoes national park is home to the most active volcano, Kilauea. Visitors love the chance of seeing destruction, and creation making this a popular site. The park, founded in 1916, contains 333,000 acres of land. Within this area visitors have the option of walking some of the 150 mile long hiking trails. The trails will take you through volcanic craters, deserts, rain forests, museums, a walk-in lava tube, and you can also see two active volcanoes.

The Kilauea Visitor Center is open from 7:45 a.m.-5 p.m. daily. With tours going on as long as you wish.