Poet for the young, confused, intrigued

Poet for the young, confused, intrigued 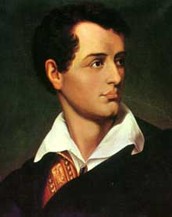 George Gordon Byron was born on January 22, 1788, in Aberdeen, Scotland. He was abandoned by his father at a young age and resented his mother. He isolated himself when he was young and was very unhappy. He was the heir to a idyllic estate but it was run down. He was attracted to men and women, which only made him more reclusive and secretive.

He studied at Aberdeen Grammar School and then Trinity College in Cambridge. In 1806 his first published volume was Fugitive Pieces. His volume was very obscure and childish. Byron's second collection was Hours of Idleness, which had many poems about John Edelston a younger friend he had come to deeply love.

When byron was 20 he was in great debt, he then took a touring trip through the mediteranian. His sexual freedom and climate changes influenced his poems. When he returned to England in 1811 he published his "Childe Harold's Pilgramage" which sold out in 3 days. It was very popular. He used his new popularity to speak for workers rights and social reforms.

Byrons social life was rocky, married and divorced, he fled England for the charges his ex-wife had acused him for. Once he got to Italy he started working on his masture piece "Doan Juan". Byron died April 19.1824 at the age of 36 "Don Juan" was not completed. His work inspired many poets after him and will never be forgotten.

The Love of a Woman

When We Two Parted

When we two parted In silence and tears, Half broken-hearted To sever for years, Pale grew thy cheek and cold, Colder thy kiss; Truly that hour foretold Sorrow to this. The dew of the morning Sunk chill on my brow-- It felt like the warning Of what I feel now. Thy vows are all broken, And light is thy fame; I hear thy name spoken, And share in its shame. They name thee before me, A knell to mine ear; A shudder comes o’er me-- Why wert thou so dear? They know not I knew thee, Who knew thee too well-- Long, long shall I rue thee, Too deeply to tell. In secret we met-- In silence I grieve, That thy heart could forget, Thy spirit deceive. If I should meet thee After long years, How should I greet thee?-- With silence and tears.
This poem represents a divorce/breakup. Hes talking about the pain and suffering of the end of his ralationship. He questioned how they would greet ecother if they met agian.

So We"ll Go No More A Roving

So, we’ll go no more a roving So late into the night, Though the heart be still as loving, And the moon be still as bright. For the sword outwears its sheath, And the soul wears out the breast, And the heart must pause to breathe, And love itself have rest. Though the night was made for loving, And the day returns too soon, Yet we’ll go no more a roving By the light of the moon.
This poem is representing parting at night, and going about the day as normal. Hes saying that he needs to grow up. There will come a day where he will.

She Walks in Beauty

She walks in beauty, like the night Of cloudless climes and starry skies; And all that’s best of dark and bright Meet in her aspect and her eyes: Thus mellowed to that tender light Which heaven to gaudy day denies. II. One shade the more, one ray the less, Had half impaired the nameless grace Which waves in every raven tress, Or softly lightens o’er her face; Where thoughts serenely sweet express How pure, how dear their dwelling place. III. And on that cheek, and o’er that brow, So soft, so calm, yet eloquent, The smiles that win, the tints that glow, But tell of days in goodness spent, A mind at peace with all below, A heart whose love is innocent!
Byron is telling about a woman. She is beautiful,pure and perfect.

Follow Caden Billings
Contact Caden Billings
Embed code is for website/blog and not email. To embed your newsletter in a Mass Notification System, click HERE to see how or reach out to support@smore.com