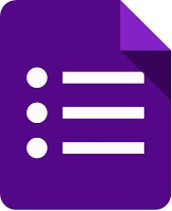 As the term winds on and assessing becomes more and more prevalent, the "go-to" tool that can be used is Google Forms. This allows for efficient administering with flexible options for questions. However, there have been some worthwhile updates to Forms in the last few months aimed at making the Form creation much easier. Below are a few of the updates Google released for Forms over the summer. 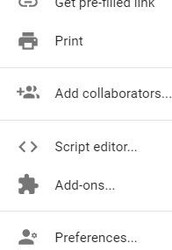 The Addition of the Preferences Option

After the release of the ability to make Forms a Quiz, several features were missing. The addition of the Preferences option eliminates those. Found under the "more options" (3 vertical dots) in the upper right hand corner, Preferences is at the end of the list. Once opened, you're able to further customize your quiz. The two biggest hindrances with Forms are now fixed in this location:

Make Questions Required: Prior to this upgrade, when you wanted to create a quiz, you had to make sure each question was marked as required. Now, with one checkbox checked, you can easily make all questions required.

These are definitely time-saving updates that make it much easier to create a quiz quickly and efficiently.

Along with this update comes the addition of a new question type: the Checkbox Grid. This allows for easy scheduling for meetings and availabilities. If you're in the elementary realm, scheduling parent-teacher conferences using the Checkbox Grid Option would make scheduling those a piece of cake! 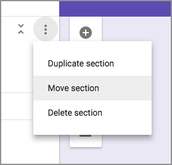 If you're an advanced user of Google Forms, or at the very least have sections in your Form, this is a nice addition. Previously, if you're designing with sections and would like to reorder them, you had to drag each question one by one. Now, just select the option to move the section and a pop up box appears, allowing for this to be done with just a few clicks.

This is a neat addition that doesn't necessarily make the creation of the Form easier, but it sure does make the responses better. This would be used if you're needing and email address or a number. Adding a Response Validation makes it so the Form will not be accepted unless the desired response is written in the correct format: i.e. and email address or age, or other inquiry.