A Message From the Principal

This month schools around the world will be kicking off a campaign to raise awareness about bullying prevention in our schools. Here at Silver Springs will be doing things to promote kindness and celebrate our unique qualities.

Northville Public Schools has a policy about bullying. We do not tolerate bullying. You can find our policy here:

Additionally, NPS addresses bullying, and the penalties for bullying in the student code of conduct, accessible here:

Bullying is defined as any behavior that any reasonable person would know is likely to cause harm to another. Bullying tends to be repetitive, it is often targeted behavior (meaning the bully is looking for, or coming after a particular person or group of people), and bullying features an imbalance of power. One person is powerful, the other is powerless.

So what are the differences in bullying behavior vs. rude behavior, or mean behavior? There are differences, though none of these behaviors are acceptable.

An article in Psychology Today by Signe Whitson, L.S.W., details the differences in these three socially unacceptable behaviors.

Rude behavior = Inadvertently saying or doing something that hurts someone else.

The operative word in the above definition is "inadvertent." These are socially insensitive behaviors that come from a failure to care about or read social cues. Most of us have been rude or insensitive at times. There's no doubt these behaviors can be hurtful, and certainly interfere with the development of normal, positive relationships. People who are rude may have a pattern of insensitive behavior. They're likely not targeting anyone in particular. Rude behavior is an equal opportunity offender.

Mean behavior = Purposefully saying or doing something to hurt someone once (or maybe twice).

Mean behavior is impulsive, but intentional behavior. It's the kind of thing that may happen more than once and it tends to be a result of anger or disagreement. Whitson writes, "Very often, mean behavior in kids is motivated by angry feelings and/or the mis-guided goal of propping themselves up in comparison to the person they are putting down." On the playground this can look like posturing when playing a team sport, or criticizing someone else's choices, or their way of doing something, or even excluding someone from an activity. "Your team cheats," is an example of a mean comment designed to hurt. Siblings and family members can be deliberately mean. Children may be mean to friends during a disagreement. Meanness becomes bullying when it's repetitive and controlling.

Bullying = Intentionally aggressive behavior, repeated over time, that involves an imbalance of power

The literature on bullying features these three elements: an imbalance of power, repetition of mean, rude, hurtful behavior, and the targeted intention to cause harm.

When I investigate a charge of bullying I'm looking for answers to the following questions: Has this happened more than once? Does the "bully" respond when the "victim" says "no" or "stop?" Is the behavior intentional? Is the behavior targeted? Does the "bully" behave this way only to one person, or one specific group; or does the "bully" behave aggressively toward everyone? Was there anger involved? How is the recipient of this behavior chosen? Who else does this behavior happen to? Is it planned behavior or is it impulsive behavior? What is the motive of the behavior? Was the behavior witnessed by anyone else or experienced by anyone else? Is there an implied or actual threat? Would any reasonable person recognize the threat or harm?

Allow me to be clear - in a civil society there is no room for any of these three behaviors, and we handle all these behaviors when they crop up at school.

• Rude behavior is self-centered behavior. Think the old "bull in a china closet" analogy. This is socially inept behavior that wounds indiscriminately. The rude person may not know or care that they're being rude. They're very focused on themselves.

• Mean behavior is behavior that happens in times of anger and it may happen once or twice. It's often personal. Siblings and friends can be mean. They know what buttons to push and what comments to make that will wound or get a reaction based on their relationship. No one likes a meanie. Sometimes kids are mean to one another and the next thing you know they're inviting each over for play dates. Kids who are regularly mean will eventually find themselves socially ostracized.

• Bullying behavior is usually intentional, repetitive, targeted behavior that features an imbalance of power. Bullies will intentionally pick their time and place for maximum effect. The victim feels powerless to stop the behavior. Bullies may be very popular people by virtue of their social power.

Habit 8 - Finding Your Voice - is the habit that helps kids with bullying.

The first seven of Steven Covey’s habits are about becoming an effective person. We really work on that at Silver Springs. But there IS an 8th Habit as well. That 8th Habit is what takes a person from being effective to great. The 8th habit is “Finding your voice and inspiring others to find theirs.” In my experience, many of the conflicts that arise among people, and among children, begin with a breakdown of communication. Somewhere along the line we quit communicating clearly, carefully, and respectfully, and problems occur. So finding and using your voice, and inspiring others to find theirs is about communication, and feeling empowered to speak for yourself.

To bully-proof your kids, they need to learn self-advocacy skills. Most bullies will target victims who are seen as powerless, unwilling or unable to speak up, or stand up for themselves. Children who speak up tend not to become victims of bullies. We're working at Silver Springs to help every child find their voice.

Here's to a fun, kind, October! 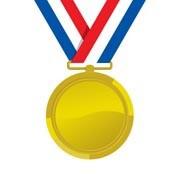 Help us go for the GOLD for Silver Springs!!

This is a fuss-free way to help fund:

Thank you to all families who have contributed!!!

We have 137 PTA members! Over halfway to our goal of 200! Help us represent our children. 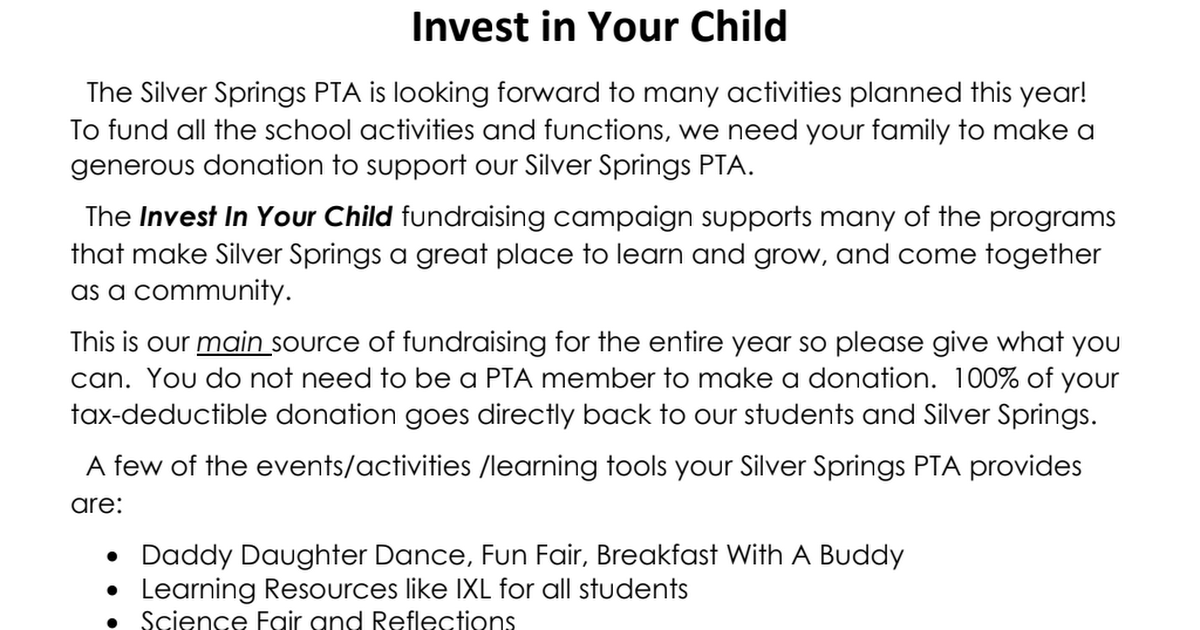 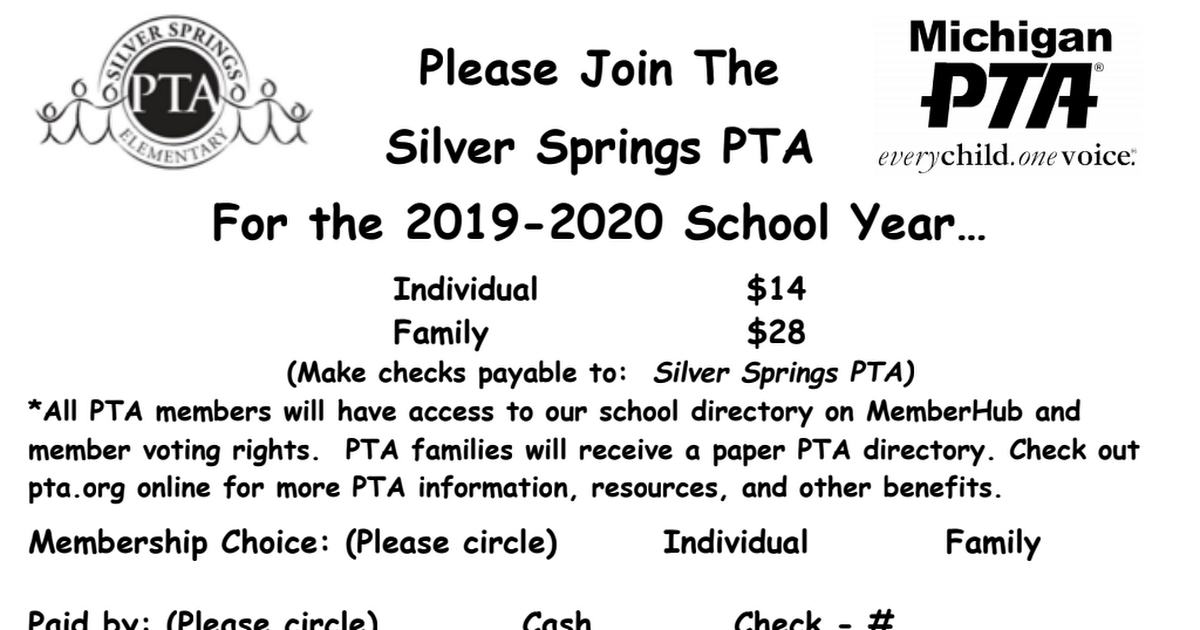 This Friday, October 11th, Northville High School will be playing in their Homecoming Football game against Plymouth High School. Let's show our Northville spirit by wearing the school's colors of black and orange on Friday! Go Mustangs!!

Silver Springs families, please join us for a SPOOKtacular good time! The PTA is hosting a Trunk or Treat on October 18th from 6:30-7:30 pm. There is a Sign-up Genius Link below for those of you who would like to volunteer, decorate your trunk or give candy or goodie donations. All of which are greatly appreciated and are what will make this event amazing! It’s very important that you RSVP, so please make sure to check your students Monday envelope this week for the flyer and return the bottom portion before October 15th. All students must be accompanied by a parent or guardian. We are really looking forward to seeing you all there! 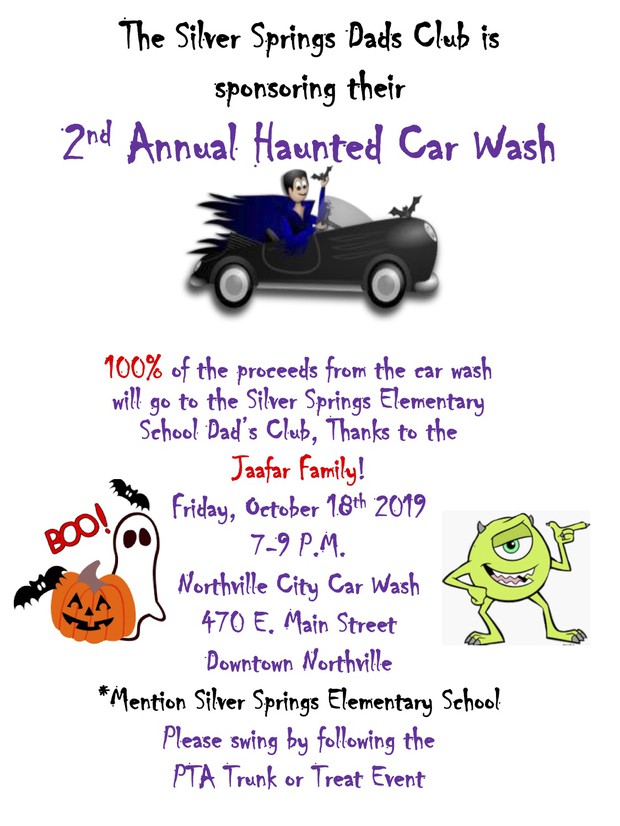 Include student name/teacher on the back of the entry

A Message from our PTA Health and Wellness Committee

LICE Lessons, Getting Down to the “Nitty”-Gritty

Please see the attached information sheet prepared by our very own PTA Health and Wellness Committee! 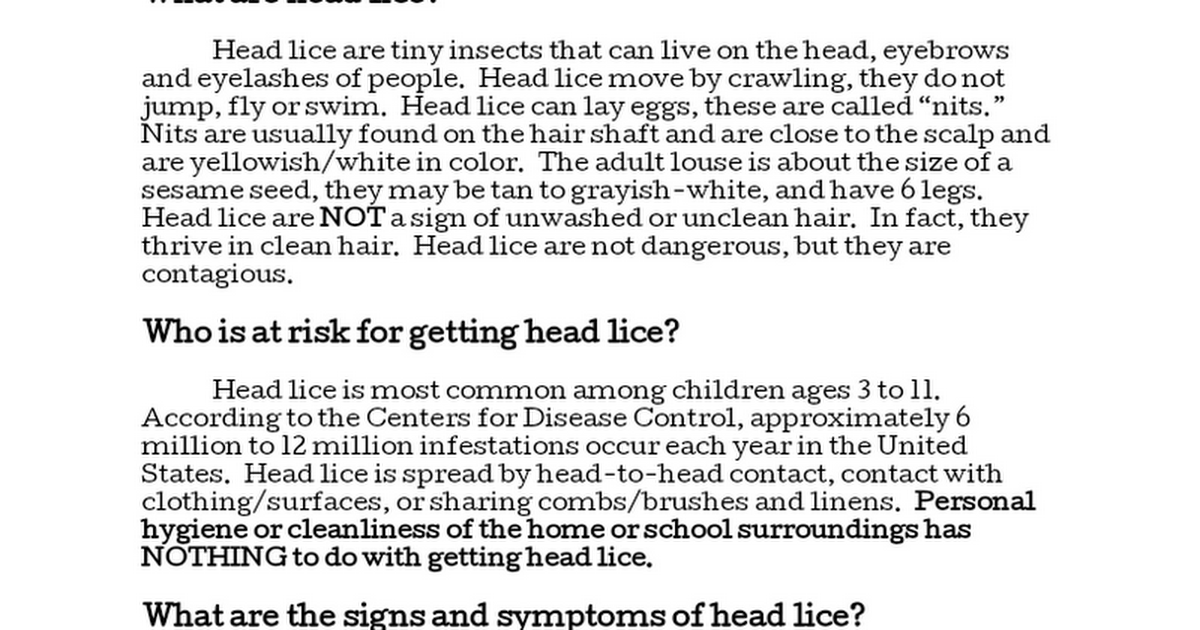 Look for Order Forms in Your Child’s Monday Envelope

The Silver Springs PTA is offering to place orders again for the Kindness Matters t-shirts to promote KINDNESS. We need a minimum order of 18 t-shirts to place an order. This will probably be the only offer this year so order your KINDNESS t-shirts now.

Thank you to all the skaters and families who attended the first Silver Springs Skating Party on September 18th. We had 80 skaters which earned $160 for our SS PTA. We hope to see many skaters at our next one on Monday, November 4th. We hope to see you there for some fun and exercise with family and friends!

Starting the week of September 30th, we will be launching a t-shirt design contest for all interested students to participate in! These t-shirts will be worn at all school-wide assemblies, class field trips, Leadership Day (December 6th) and on NEST days (Neighbors-varying aged students, Enthusiastically Synergizing Together).

Design Contest Rules: Designs must be in one color and fit on an 8 1/2 x 11 size sheet of paper. All entries must be received in the office by Friday, October 11th. No late entries will be accepted.

Students will have the opportunity to order these special t-shirts within the next few weeks. Please keep a lookout for the order form in your child's Monday envelope and on the weekly Eagle Express. 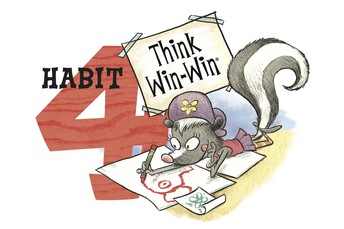 Supporting the The 7 Habits at home!

What this means: Think about others as well as yourself. Long-term relationships require mutual respect and mutual benefit.

“I make deposits into others’ Emotional Bank Accounts.”

“When conflict arises, I look for third alternatives.”

“I balance courage for getting what I want, with

consideration for what others want.”

How can I do this in my life?

1. Live by the Golden Rule- Treat others the same way you want them to treat you.

The Rainbow Fish by Marcus Pfister

Alexander and the Wind-Up Mouse by Leo Lionni

Let’s Be Enemies by Janice May Udry 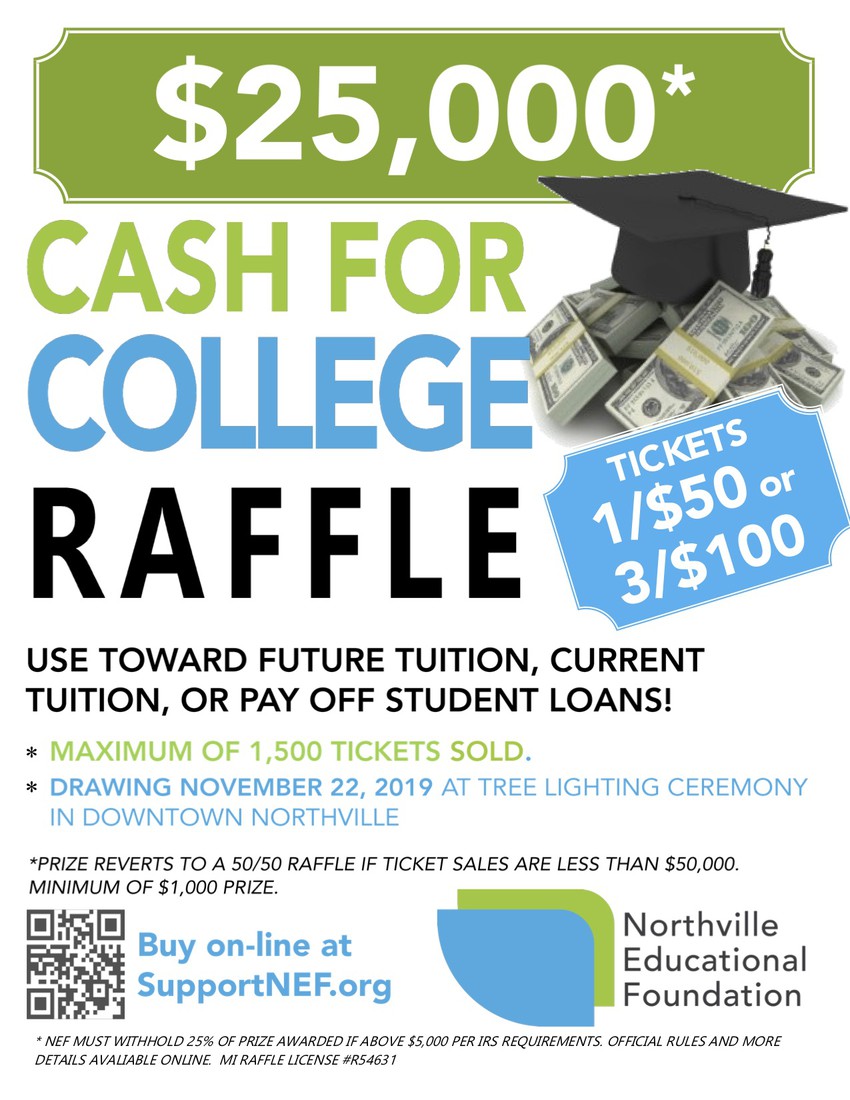 The Harlem Wizards are coming back to take on the Mustang Madness team, made up of teachers, principals and coaches from all of the Northville Public Schools. Game time is 7:00 pm in the NHS Gym (doors open at 6:00 pm). Tickets are on sale now at https://harlemwizards.thundertix.com/events/15170. General Admission: $10, Reserved Seating: $20 (lower level of the bleachers), Court Side Plus: $30 (chairs on the court, with interaction with the players). Reserved Seating and Court Side Plus will sell out in weeks - get your tickets now! Order jerseys for your children and they can be Wiz Kids and warm up with the Harlem Wizards team! 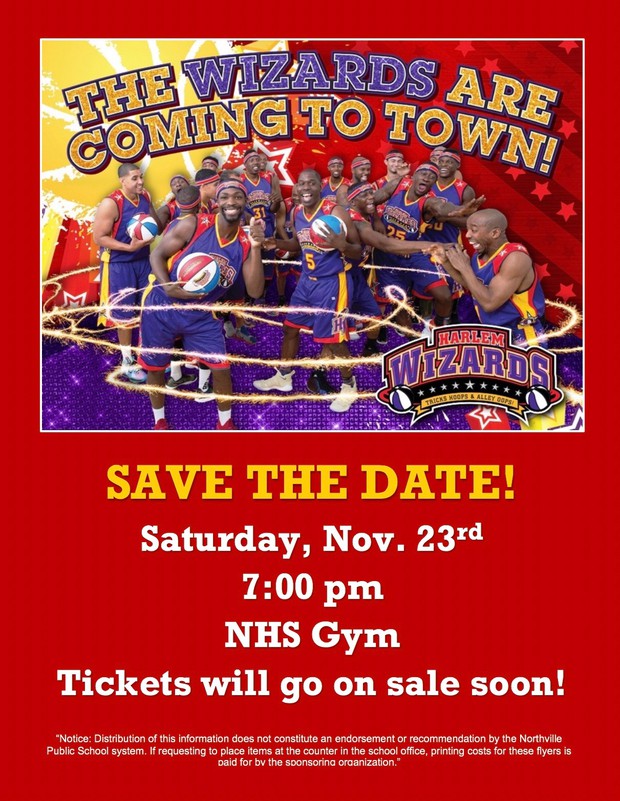 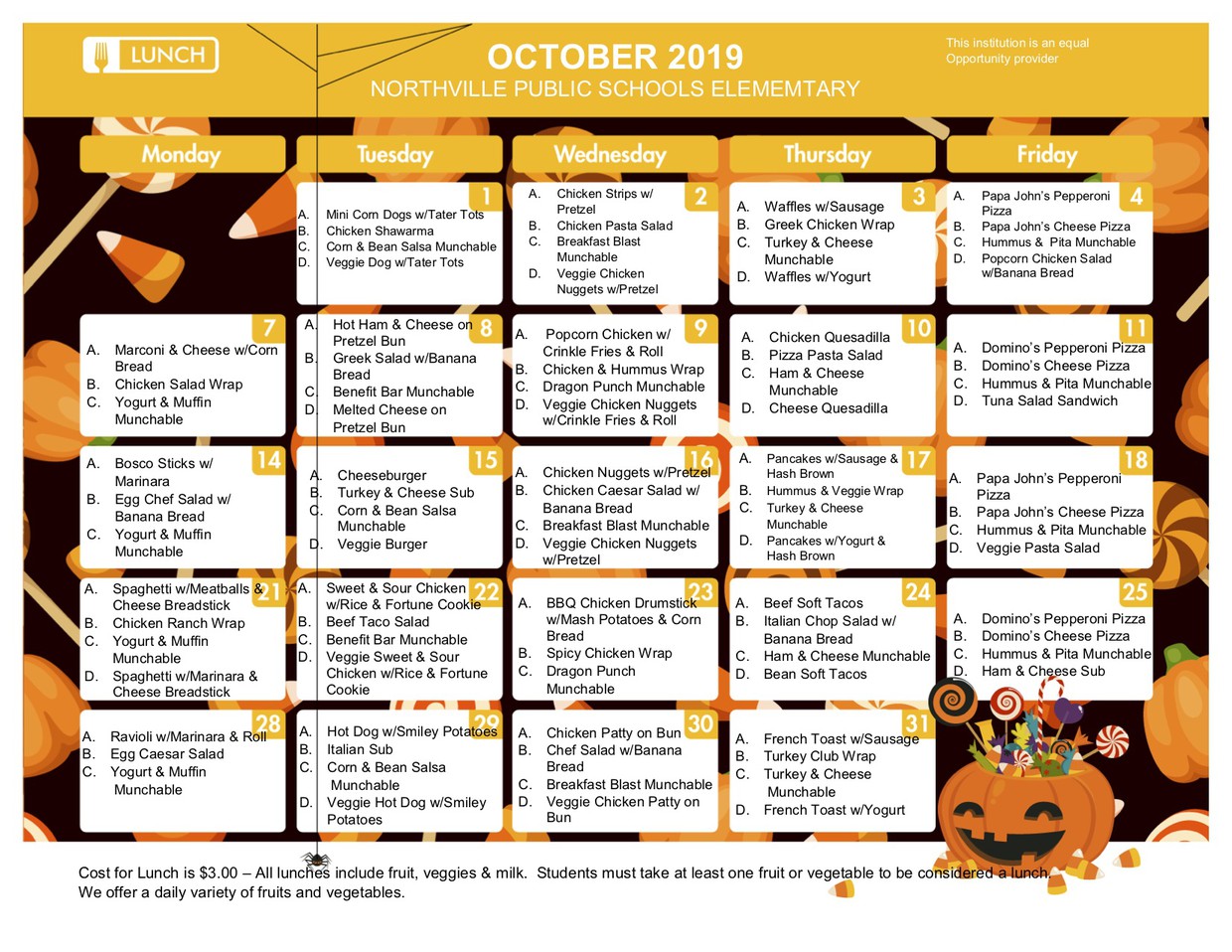