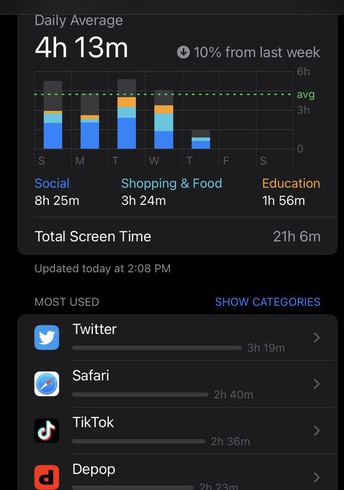 For the impossible task of choosing a film for movie night with my kids, I've resorted to Googling "Best kids movies of 1984" so I can force them to watch what I watched as a six-year-old. They give it twenty minutes before they can turn it off. Last Friday I chose The Neverending Story, a film about a young boy, Bastian, who finds a magical book in which he becomes part of its story. The primary villain in Fantasica (the fantasy world within the book) is what is referred to as "The Nothingness." It's not a monster or robot or evil dictator. It's a sense of emptiness that pervades Fantastica and swallows up its inhabitants, one by one. As the story unfolds, we learn that Fantastica can only survive if humans foster their sense of imagination and hope.

I've been wanting to write this for several months now, but I didn't want to be the old guy with the tired argument about "kids these days" and their obsession with technology. You've read that essay before. But last week, when a student showed me her iPhone screen time and I saw 24 hours on TikTok for the week, I broke.

Social media has become "The Nothingness."

And I want to be clear that I don't think all kids have a problem. Some are able to manage it quite well. But most, like most adults, cannot. Former Google executive Tristan Harris said it best:

"Every time you open an app, there are 1,000 people behind the screen being paid really well to keep you scrolling."

How can one person, much less a teenager with a developing brain, combat this kind of power?

A colleague made the argument that compared social media to candy. She said she made the mistake of banning candy in her house, and now her grown daughters are both addicted to sweets. It's an understandable comparison, but not an apt one.

(Side note: her kids did not get into social media and they are flourishing right now).

I (and most neuroscientists) contend that smartphones in general and social media apps, in particular, are more like cocaine than candy. I don't think anyone would say "We need to expose our kids to cocaine when they're young so they know how to manage it later." Candy is finite, french fries are finite, even TV is finite. But a smartphone provides an infinite world of possibilities, many of them not healthy.

And of course, we all know as parents that it feels impossible to manage something that we cannot see, let alone understand. My son begs me to take him to the library to play Minecraft (that's a whole other essay) and I struggle to drag him off so we can read a book. Yes, I recognize the horrible irony in this.

To be sure, misuse or overuse of social media is not necessarily always the problem. It may be more of a symptom of a deeper problem - boredom, fear, loneliness, isolation, depression. But having it readily at hand does not help.

There is hope. For one, my kids sat through all of The Neverending Story and loved it. We even got the book from the library (after Minecraft). Also, I met with another student last week and when she showed me her screen time (see upper right image), my heart sang. When I asked her why her screentime is so low, she answered flatly: "I have too much other stuff to do."

For the student who has spent a full day on TikTok, I issued the Mr. Hughes TikTok Challenge: Delete the app for a full week. Although she only lasted two days, her TikTok time was down to eight hours. What did she do with that 16 hours? "Maybe some schoolwork, but mostly I slept." To me, and to most pediatricians, psychologists, and neuroscientists, that's a win.

At the end of The Neverending Story, Bastian's love of reading, expansive imagination, and hope for the future ultimately defeat The Nothingness, and Fantastica is saved.

Everybody with me now...let's join Bastian. Take out your phone, find your favorite social media app, press down your finger, and click the red "X." There is something waiting to take its place.

Perhaps it's imagination. Or hope. Or simply, in the words of my student, "other stuff" more worthy of our attention.

Acceptance letters are rolling in for seniors! 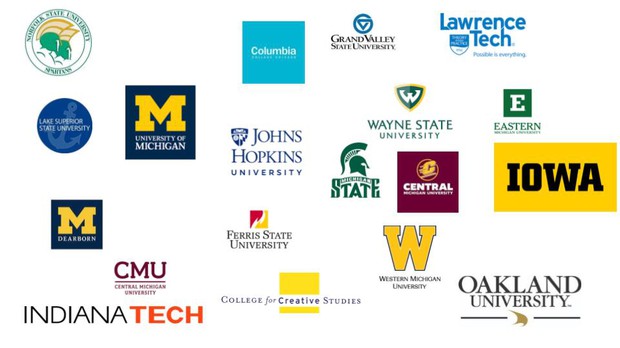 Click the agenda for a recap of what we covered at Thursday's meeting.

<<TWO BOOKS YOU SHOULD BUY OR CHECK OUT FROM THE LIBRARY>>

On Writing the College Application Essay

Please click the link below to sign up for your REQUIRED Spring meeting to discuss the SAT, course selections for senior year, college apps, scholarships, etc: 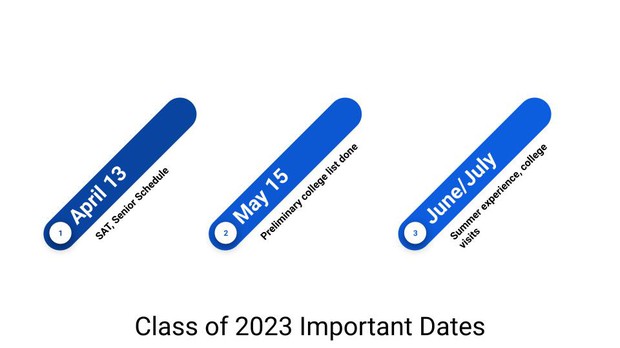 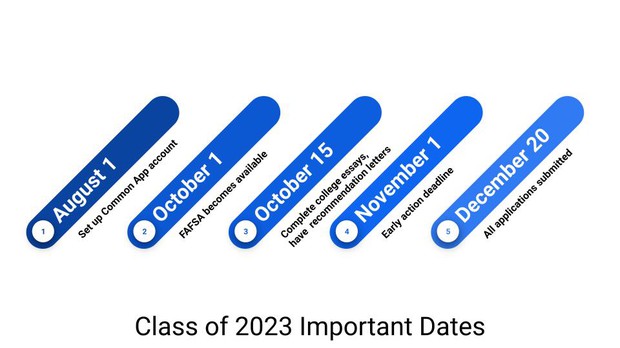 Some questions you need to be asking yourself:

Use this tool to compare financial aid from the schools you've been accepted to.

The #1 piece of advice I give to students once they go from "apply" mode to "decision" mode is to visit every school you are seriously considering attending. You'll thank yourself later!

Check out the scholarships page on the Eagle Scholars website and start applying if you have not already!

What: Eagle Study Sessions, and the opportunity to work on assignments with other scholars, ask for assistance while working.

Time: 3:10-4:10, no bus transportation, parent/guardian must commit to picking up at 4:10 or giving permission to walk home.

*Note* This models the homework clinic available on Mondays and Thursdays. If this session fills or you prefer to have your child attend 2 days a week, you are welcome to sign up for that instead.

“Avoid doing what you would blame others for doing.” --Thales 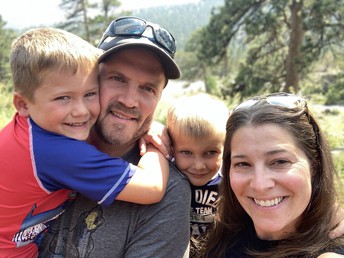 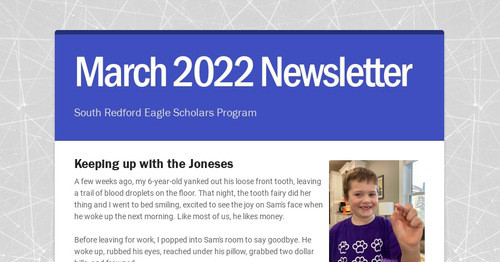 www.smore.com
A few weeks ago, my 6-year-old yanked out his loose front tooth, leaving a trail of blood droplets on the floor. That night, the tooth fairy did her thing and I went to bed smiling, excited to see the joy on Sam's face when he woke up the next morning. 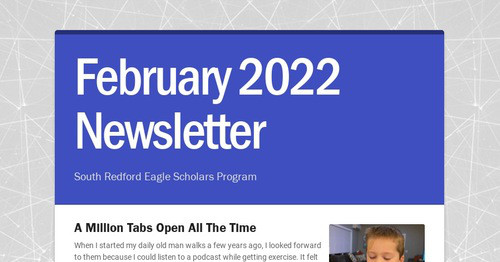 www.smore.com
When I started my daily old man walks a few years ago, I looked forward to them because I could listen to a podcast while getting exercise. It felt like I was cheating; I was getting smarter and more fit at the same time. 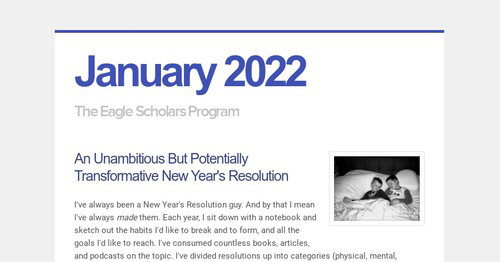 www.smore.com
I've always been a New Year's Resolution guy. And by that I mean I've always made them. Each year, I sit down with a notebook and sketch out the habits I'd like to break and to form, and all the goals I'd like to reach. I've consumed countless books, articles, and podcasts on the topic. 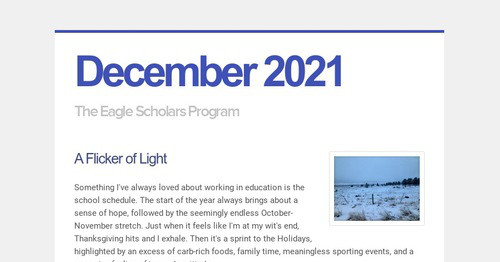 www.smore.com
Something I've always loved about working in education is the school schedule. The start of the year always brings about a sense of hope, followed by the seemingly endless October-November stretch. Just when it feels like I'm at my wit's end, Thanksgiving hits and I exhale. 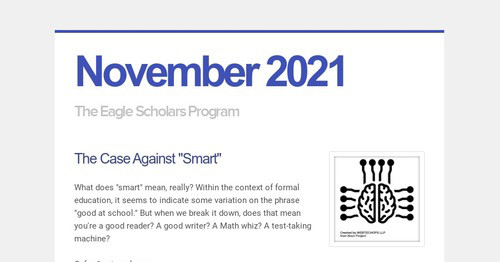 www.smore.com
What does "smart" mean, really? Within the context of formal education, it seems to indicate some variation on the phrase "good at school." But when we break it down, does that mean you're a good reader? A good writer? A Math whiz? A test-taking machine? Oxford's etymology: "... 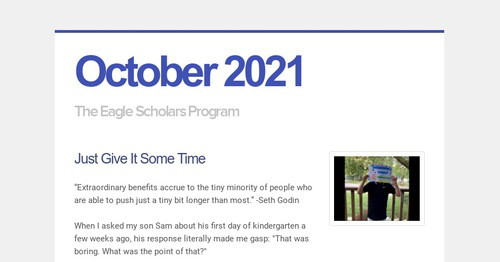 www.smore.com
"Extraordinary benefits accrue to the tiny minority of people who are able to push just a tiny bit longer than most." -Seth Godin When I asked my son Sam about his first day of kindergarten a few weeks ago, his response literally made me gasp: "That was boring. 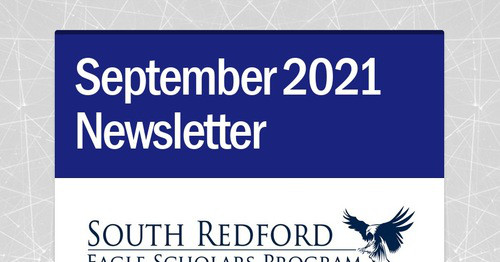 www.smore.com
I took my four-year-old to the tennis court the other day to teach him the game I fell in love with as a kid. I was a 4-time city champion in Flint (granted, there were only four teams but who's counting) and have spent my career teaching kids. 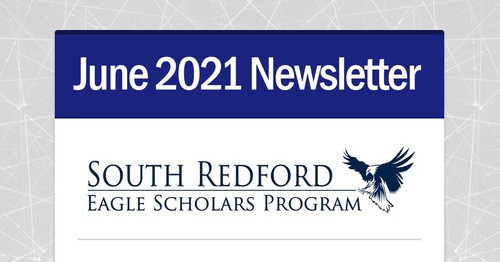 www.smore.com
I hope you're spending a lot of time off the screen and that you don't see this email for a while! Still, I wanted to share some summer resources. I also recommend that you check out the Redford Library to find some fun summer reading. GoodReads is another great resource to find good books. 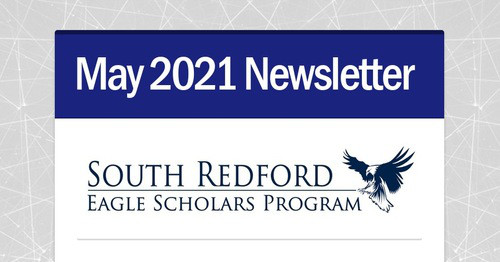 www.smore.com
Links only work if you have a LinkedIn account; if not, see the pics below*** One of the reasons I love my job is I get to see the long-term growth of students. 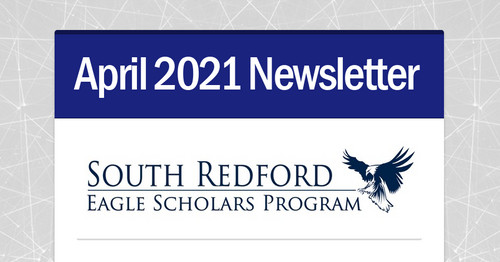 www.smore.com
With the May 1st college decision deadline quickly approaching, I've been talking to seniors a lot about plans for next year. Consider this familiar scenario: A student has been accepted to their dream school out of state, but will have to pay $20,000/year. 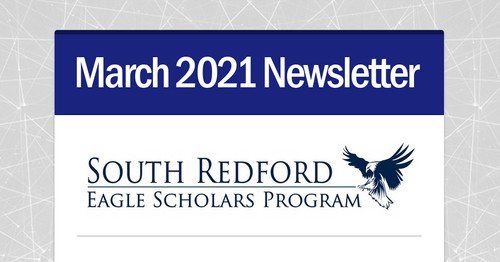 www.smore.com
I've had several conversations in recent weeks with students and parents about the dreaded acronym: G.P.A. Many students are below the 3.0 requirement for the program and several others, while above 3.0, are not where they would like to be to get into their dream college. 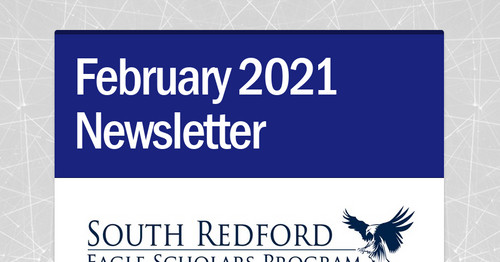 www.smore.com
I'm not really not one for ceremony or even national tradition. I don't talk to my kids enough about what goes on in the government and I may regret it someday. But on January 20th around 11:45 am, I yelled to my boys who were upstairs building a fort: "Sam! 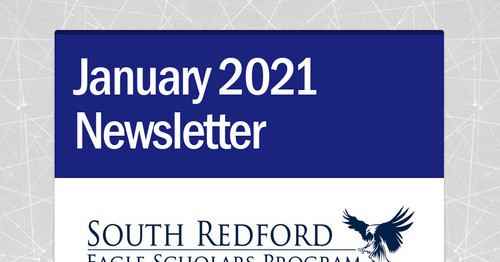 www.smore.com
One hope I have for 2021 is to better myself as an overall person and focus on my goals in life. To put more time into my education, to work better on my mental health, to be more understanding towards people, to not make the same mistakes I've made in the past few years, to save money better, and to not be such a homebody. 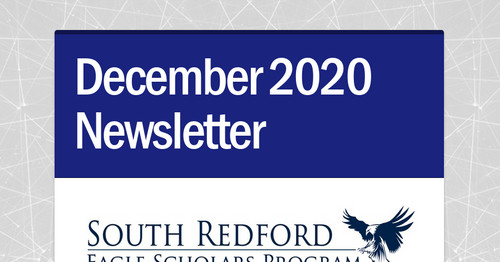 www.smore.com
Last Sunday, my son Sam went up to his elementary school for a socially-distanced meetup with his Kindergarten classmates, who to that point had only been iPad avatars. While I usually jump at the chance for his little brother to experience the super-combo of socialization and outdoor activity, I suggested Andrea take Sam on his own so I could take James, with whom I'd been having a tough time connecting. 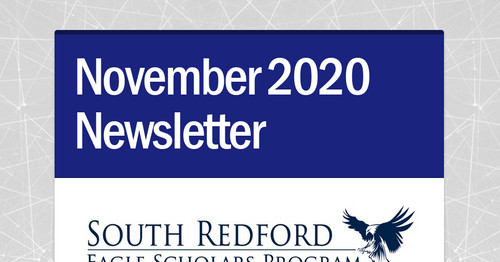 www.smore.com
"Simplicity, patience, compassion. These three are your greatest treasures. Simple in actions and thoughts, you return to the source of being. Patient* with both friends and enemies, you accord with the way things are. Compassionate toward yourself, you reconcile all beings in the world." 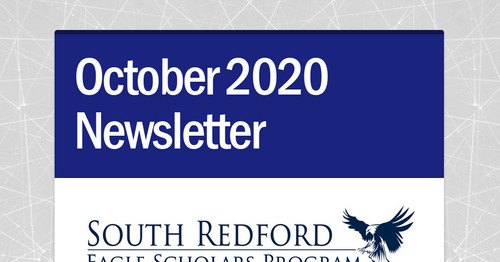 www.smore.com
A month ago, my boys thought iPads only worked on airplanes. In light of the growing body of research about the dangers of kids and mobile devices, I was in the Anti-Tech-for-Young-Kids-Except-For-TV-Because-Hey-I-Gotta-Stay-Sane camp. So when my son's school informed us he'd be receiving an iPad for Pre-Kindergarten, I was apoplectic. 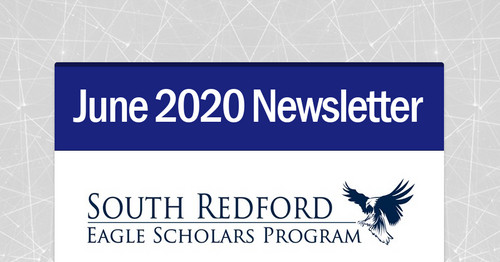 www.smore.com
Last week, I attended a virtual funeral for the mother of one of our 8th graders. It was surreal, heartbreaking, and uplifting all at once. Everyone was masked, including babies. Family and friends maintained social distance as they paid respects at the casket.
November 2016 - May 2020 Newsletters