ka is using Smore newsletters to spread the word online.

Get email updates from ka:

An endangered species in Australia, life can be hard for the wallaby. With a decreasing amount of food and affected by human creation, it needs our help!
The size of this wallaby is about 31 1/2 inches from head to tail. The coloring is a solid gray, with yellow and silver specks and dark horizontal stripes that go from the back to the tail.
As the only living member of the short-faced kangaroos, it is truly endangered. It was last found on the main island of Australia in 1906. (fauna), (sharkbay)

The Banded Hare Wallaby is a wonderful little creature that is a herbivore. It is nocturnal, and lives with its family/is quite social. This species lives in the woodlands and in thick bushes, preferably the Acacia, for its dependable shelter. It eats various sorts of grasses & fruit. There may be competition/shortage of food, where they have to fight for something to eat. This is the time when male wallabies may show aggression to be able to feed itself and its family. Sadly, human environments have been chasing them out of the the main island, only to introduce them to more predators such as feral cats. (animalin)

The habitat loss has driven the Banded Hare Wallaby from the main island of Australia to smaller islands nearby.

The accidental introduction to predators & competitors has brought the population down.

Humans have cleared areas (as well as their food) to grow more crops/to build things.

These creatures are innocent and need help!

The endangerment affects us

Since there's less food for them, they start eating more of other plants- until there is no more of them. The Wallaby helps pollination and the varieties of plants to thrive in Australia. Since they have predators, such as the Tasmanian Devil, that makes them suffer as well as a result of less wallabies to hunt. (edublogs)

Help save Australia's animals such as the Banded Hare Wallaby at websites like the one down below~
Donate to help save endangered animals! 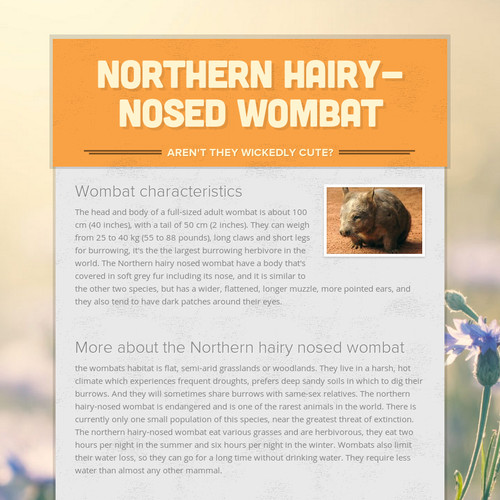 ka is using Smore newsletters to spread the word online.

Follow ka sm
Contact ka sm
Embed code is for website/blog and not email. To embed your newsletter in a Mass Notification System, click HERE to see how or reach out to support@smore.com
close