Hear that? It's the Talking Drums!

Hear that? It's the Talking Drums! 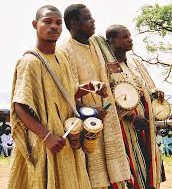 This West African drum can be traced all the way back to the Ghana Empire. The genre of griot music, created by the Hausa people, centered around the talking drum. The hourglass shape of the talking drums is a staple, but then name of this instrument does vary. Examples of other names that these drums go by is "Dondo", "Doodo", "Kalangu", and that's just to name a few! These talking drums sure do have an interesting history!

The talking drums serve four main purposes in West Africa. The drums are used by "jellis or griots" that are responsible for recording, preserving, and sharing the history and culture in the community. The drums are also used to send messages over long distances and throughout the villages. It is known that a king will send out a drummer to spread an important message to his people. These drums also are used during religious rituals. The "jellis and griots" use the drums during celebrations, sacred rites, and stories. The drums are used to unite people and to dissolve problems between people of the villages. Recent technology may minimize the need for a talking drum, but the benefits of using this wonderful instrument will always make it a great buy!

Varying Images of the Talking Drum 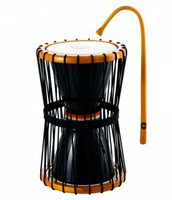 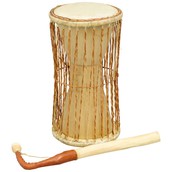 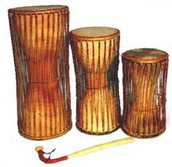 The talking drum has an hourglass figure with a head on both ends. The tone of the drum can be adjusted by tightened or loosing the strings are attached to both heads of the instrument. This membranous can also vary in size. The uniqueness of each drum ensures that whatever drum you buy will meet your specific needs!

The talking drums can be used to increase the quality of communication in your household. Instead of shouting to other family members around the house, simply play a set on the drum that sends the message you want conveyed. The drum is also a great decoration piece for your house. It can be guaranteed that house guests will be awed by the beauty of this piece and their curiosity will spark enthusiastic conversation!

Much like the talking drum, the musical bows found in Africa, are played in a variety of ways. The variety of styles that exist regarding both of these instruments has allowed for different African countries to develop their own unique touch on the instruments that they use. In West Africa, music was included in daily life tasks including ceremonies, work songs, and funerary functions. The talking drums would often be included into the music that was heard daily. The "thumb pianos", made of metal keys and a gourd projected a distinct sound just like the talking drums. The specific sounds emitted from these instruments allowed for messages to be relayed without a person ever speaking.

Relation Between the Talking Drum and the Griot or Jelli

A griot or jelli is a West African historian, musician, storyteller, etc. The griot was an important part of the oral tradition, aided by the use of talking drums. The only way for stories and music to be passed down was orally so these people were an important part of West Africa's culture. The talking drum, with its different tones, could communicate messages to people over countless generations. Most villages had their own griot, who would relay deaths, marriages, battles, hunts, and things of similar nature. With the use of the talking drums, the reliance on oral tradition was made easier and more dependable.

The talking drum was used to send messages throughout the West African villages. Today, we have phones that allow us to communicate directly. Also, emails, face-time, and other internet messaging systems exist that keep us all continuously connected. However, one positive of the talking drum is that there is no room for misinterpretation. A certain beat had a definite meaning. In today's society, it is easy to relay the wrong message due a source of confusion. With technology, we have come to the point where communication is easy and quick but is this necessarily a good thing? Maybe it's important to get back to the basics and stress the importance of music and musical instruments!