Islam is a major religion of the world. People who follow Islam, believe there is one God (Allah) and Mohammed is His prophet. Mohammed is believed to have lived in 570-632 AD. Islam is based off of Mohammed's teachings, which are recorded in a book called the Koran. The holy city of Islam is Mecca, as it was the place that Mohammed taught. People who follow Islam are required to do tasks, that are known as The Five Pillars of Islam. These tasks include fasting, pilgrimage, prayer, giving, and believing there is one God and Mohammed is His prophet. People who follow the religion are called Muslims. However, like Christians and Jews, Muslims view Abraham and God the same way. 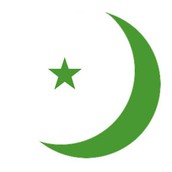 This is the symbol of the religion of Islam

This is a mosque in Mecca, the birthplace of Islam.

This is the Quran, (Koran) the book that Islamic people read from

The picture illustrates the celebration of Eid-Al-Fitr, at the end of the holy month Ramadan.

This is Mecca, a holy city according to Islam.