Volunteer as a tribute to read the book!

Volunteer as a tribute to read the book! 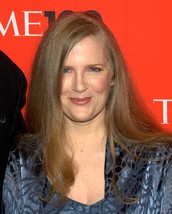 Suzanne Collins is an author of many books, but most known as the author of the "Hunger Games". A series of three books, known around the world by giving teenagers the a sense of Action, Romance, and Drama. It has gotten the award as a most favorite book award, Teen and Children's book choice award, and Hal Clement award.

In 1992 Suzanne Collins got married to Charles Pryor and had two children Charlie Pryor and Isabel Pryor. In the same year she had gotten married she started her career as a professional writer for children's television. She started of with the Underland Chronicles which came to her by the inspiration of Alice in Wonderland.

Katniss Everdeen is a 16 year old girl who volunteers for her younger sister who was chosen to fight in the hunger games. A cruel game to remember the past wars. Not only was she chosen but also 1 girl and one boy from each of the 12 districts. A 16 year old boy named Peeta was also chosen but takes his fate in a different way and accepts it and tries to find ways to win the games. Before the games all the 24 representatives are to practice and prepare for the real games by fighting each other, starting fires, and using weapons of their choice that they think are the most effective to their use and abilities.

Before the games start Peeta had told the crowd at an interview that he has had a crush on Katniss which makes the rumor of the star cross lovers start.

If Katniss were to win she would need supporters to send her things she needed at that time. She would also need help from someone in the games and that's when a 12 year old girl named Rue saves her from the group looking for her. Rue tells her to cut a branch with a nest of tracker bees, so that it would fall on the group and her and Rue could escape.

With the help of Rue she manages to finish of some of the groups members but accidentally gets Rue killed in the process by a spear. Katniss makes a small memorial in honor of Rue and continues the game. Though in sorrow Katniss fights on with Peeta who later helps her escape and fight of the rest of the group. At the end of the games only Peeta and Katniss are left standing and one must kill the other.

Peeta cannot give himself to kill his love and neither can Katniss so they both take some berries in their hands and almost poison themselves. At the last minute an announcement turns on and tells them they both won for it would be a disaster if there weren't any victors.

Both Peeta and Katniss then head back into their districts after they won the hunger games and get to see their families again but only for a short while, for there is more to come. 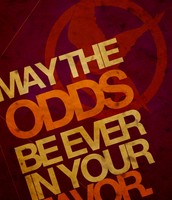 "May the Odds be ever in your Favor"

Guaranteed to be overwhelming! 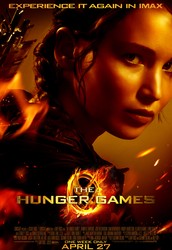 The movie was all right but the way I pictured Katniss Everdeens house, the arena, and the district very different. The movie did a very good job of the special effects, and it's character/ actor choices. The action totally came to life in the movie but the book gave it more details. Jennifer Lawrence was the perfect fit to Katniss because she was able to actually give into the characters feelings and emotions. Both the movie and the book were very good, though I don't think you should miss out the Drama in the book!