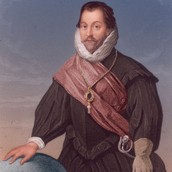 Who was Sir Francis Drake?

Sir Francis Drake was an English man born 1540 CE -1596 CE, raised in a family of merchants and privateers. At the age of 18, he went to sea and was inspired to command his own ship one day. By 1560, he earned his command. This is where his journey really begun.

Who Started the Voyage? What happened?

Frances was given the consent by Queen Elizabeth l to be a privateers commission , then he was off and claimed Spanish ports in the Caribbean. He also captured Nombre de Dios port in Panama on his first solo voyage, and acquired lots of silver and gold. He stayed there for awhile after being wounded, then headed back across the Pacific Ocean and gained not only money, but power and glory.

What Problems or Challenges did Francis Face?

Soon after Francis's last journey, he was assigned by The Queen 1578, to go around South America and share the position of command with two other sailors. One got arrested and beheaded for plotting mutiny. And the other commander got caught in a storm, which destroyed the ship. Francis was the only commander at sea with a much smaller fleet when returning to England.

-First English man to sail around the world

- April 1581, he was awarded Knighthood by Queen Elizabeth

Overall his dreams came true and he did achieve what he wanted to, he got all the money and glory for England and himself.

Other Interesting Facts about Francis

- Died of fever with infectious diarrhea