The deadliest fish in the world...

The deadliest fish in the world...

It is mainly found in coastal areas within the Indo-Pacific region, comprised of much of the Pacific Ocean, the Indian Ocean, and the Indonesian seas that join them, excluding polar and temperate regions. Habitats are also found off the northern Australian coast. Though considered a marine animal, a few species are known to live in rivers. Its main habitat is on coral reefs or near and about rocks.

Total length to 47 cm, common to 28 cm. Head, body and fins are generally dark brown. The skin is warty, scaleless and often covered in a short coat of filamentous algae. Thirteen sharp dorsal spines are each contained in a thick sheath of skin. The head has deep pits and grooves. The eyes are small and situated on a raised bony structure. The pectoral fins are enlarged and fleshy.

The stonefish is well camouflaged in the ocean, as it is a brownish colour, and often resembles a rock. This is why it is called the Stonefish. The fish usually lies motionless, often partially buried in the substrate and perfectly camouflaged among surrounding coral, rocky reef, rubble, or aquatic plants. Stonefish may be found from exposed sand and mud in tidal inlets to depths of 40 m.
It has thirteen sharp dorsal spines on its back, which each have extremely toxic venom. When disturbed, the fish erects its spines, but maintains its position on the sea floor.
Amazing Animal Fact: The venom of a stonefish can kill a human in two hours.

Deadliest Fish in the World….

It is believed to be the deadliest fish in the world.

Stings usually occur to the feet of swimmers or waders who have ventured away from clean sandy substrate and closer to the more complex bottom structure preferred by the stonefish. Multiple spines can often penetrate affected limbs, resulting in more extensive envenomation. The pain is immediate, excruciating and may last for many days. Muscular paralysis, breathing difficulties, shock, and sometimes heart failure and death can ensue.

To prevent stonefish stings, sturdy footwear should be worn on reef flats, or while wading on soft-bottom substrates adjacent to rocky or weedy areas. An antivenene for stonefish stings has been developed. In the event of a sting, the victim should leave the water, apply first aid and seek medical attention as soon as possible.

At the beginning immersing the stung area into hot water may be effective, but hospitalization for intravenous narcotic analgesia, local anaesthetic infiltration or regional block may be required. Definitive management consists of administration of stonefish antivenom usually given intramuscularly.

Antivenom is administered if:

-the victim suffers from severe pain

-there are multiple punctures, which indicate the discharge of several spines. This means that larger amount of venom has been injected 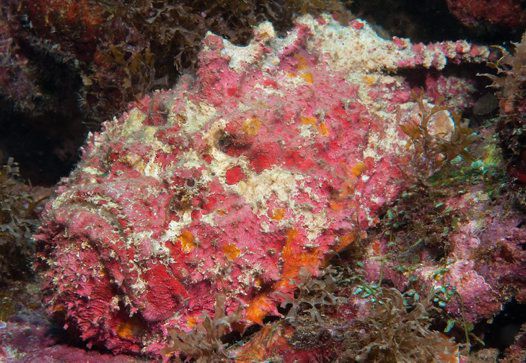 Follow Samantha McKenzie
Contact Samantha McKenzie
Embed code is for website/blog and not email. To embed your newsletter in a Mass Notification System, click HERE to see how or reach out to support@smore.com
close