By: Alyssa Hoppie and Dylan Peterson

By: Alyssa Hoppie and Dylan Peterson

The subways ad is using a testimonial propaganda technique by using a famous football player to how promote their sandwiches. The speaker is the celebrity trying to tell you to eat at subway. The audience is sports fans because they want to eat at subway after seeing someone they look up to eat there. The overall purpose of the add is for more people to eat at subway. 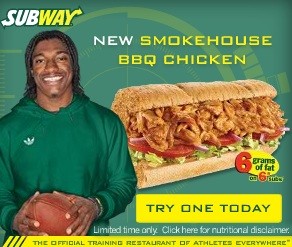 The Nationwide insurance ad used the propaganda techniques of a slogan (nationwide is on your side) to promote their insurance. The speaker is nation wide. The audience is people looking to buy insurance. The overall purpose of the dad is to show people that nationwide is a reliable company and someone you can trust.

In this commercial, Apple uses the bandwagon technique by showing lots of people using Apple products. This propaganda technique promotes Apple products. The speaker is the brand apple. The audience is people who want to buy apple products and want to be healthy. The overall purpose is to get people to buy iPhones and to use the new apps on the phone.
Apple - iPhone 5s - TV Ad - Strength