Am is using Smore newsletters to spread the word online.

Get email updates from Am:

Sadly, brown bears are being hunted against their will for their glorious fur. As sad as it may be, the hunters won't stop until they have all of their fur in their possession. Please donate to the Endangered Animal Foundation so that we could save these terrific animals from extinction. 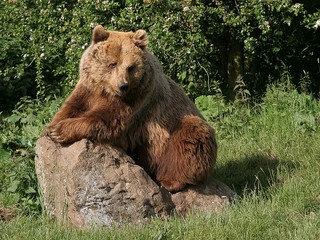 Brown bears are mammals and they have brown fur. Their head to body length is 1.5 meters to 2.8 meters. The male's weight varies from 135 kilograms to 545 kilograms. The females weight from 80 to 250 kilograms. Their way of communicating is roaring and body language. One characteristic is that males compete for females during the mating season. Also, brown bears hibernate and while they do, female bears sometimes have their cubs. (Ark)

Brown bears live all over the world from the tundra to the forest! Some examples are China and Italy. Also, they live in deserts and semi-deserts. The climate in tundra is cold. In deserts, it is hot and dry. In forest and woodlands, it is tropical. Brown bears live in a den while they're hibernating in winter. However, they live on ground mostly and have extremely large territory. (Ark)

Brown bears eat practically everything! They eat from berries and nuts to animals as big as a black bear. Brown bear finds food almost everywhere. They are omnivores and are predators! So, they're on the top of the food chain. (Ark)

Brown bears have prominent should hump, sharp claws, and strong legs. This helps them protect themselves from enemies. Males fight for females during the mating season. The sames features i mentioned before helps them hunt. During a certain season, brown bears gather at different rivers to catch salmons that swim upstream. Sometimes, they drag carrions and eat them. Also, they hunt animals by pouncing on them. (Ark)

A brown bear eating a leaf in water.

A brown bear in water.

Connect with Am Ch

Am is using Smore newsletters to spread the word online.

Follow Am Ch
Contact Am Ch
Embed code is for website/blog and not email. To embed your newsletter in a Mass Notification System, click HERE to see how or reach out to support@smore.com
close