Jazmine is using Smore newsletters to spread the word online.

Get email updates from Jazmine:

The construction of Europe

The construction of Europe 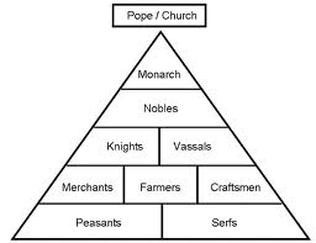 The Feudal System was a legal and military custom that was used to structure society. A system based off of land and loyalty, land-owning lords would offer their land to knights in exchange for their loyalty and protection.

The Trebuchet was one of the many weapons used in the Middle Ages. Originally made in China in 300BC, the Trebuchet reached Europe in 500 AD. It was similar to a catapult, and could propel objects 980 feet away. It was used to fire large stones at attackers and acted as a seige engine. 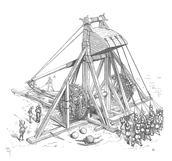 Made by the Romans in 400BC, the Mangonel was used to aim different missiles at castle walls, fortresses, and even cities. Although not always accurate, the Mangonel could propel objects 1,300 feet away.

One of the most well known Medieval weapons, the Battering Ram was used to break down walls and drawbridges. To do this, a sharp metal tip was on one the timber's ends. Knights then could repeatedly ram the weapon into an area until it broke down allowing their entrance.

Life of a Knight

Training to become a Knight began at a young age, and most often Knights in training would be sent to live with a relative or lord that had the resources to properly train him. The schedule of a Knight was very similar to the one of the noble he served. In times of war, Knights would be sent out to fight for their King. When not needed, a Knight would often work on his weapon skills and maintaining his fitness. Knights would have a daily discussion on war strategy and increase their knowledge on warfare. Knights participated in daily prayers, and were expected to understand Chivalry and courtly love. 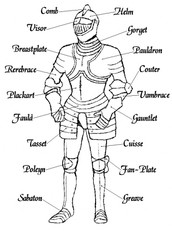 Normally, Knights would limit themselves to carrying just a lance and a sword. A lance was a long throwing spear that was used while riding a horse and gave Knights an advantage against foot soldiers. But Knights would also sometimes use a mace or longbow. A mace is club with a steel head that could crush an enemy, while a longbow was a basic large bow that would shoot a feathered arrow. Although the longbow was considered a cowardly weapon by the knights, it was a major part in the victory of battles. Heavy armor was worn that was made of metal, and would come in two types: Chain mail, and plate armor.

Chain mail was armor made of thousands of metal rings and had to be worn with a padded cloak underneath. This helped Knights carry the cloak, since the weight of this armor could range up to 30 pounds. Although it offered good protection and was flexible, an arrow or thin sword could easily pierce the Knight. For better protection, Knights began to cover vital parts of their bodies with metal plates. This continued until eventually they were completely covered in metal plates, creating plate armor. Plate armor offered better protection, but was not as flexible and heavier than chain mail. A full armor could weight up to 60 pounds. There were many pieces that went with plate armor such as greaves, sabatons, gauntlets, breastplate, rerebrace, and the helmet. 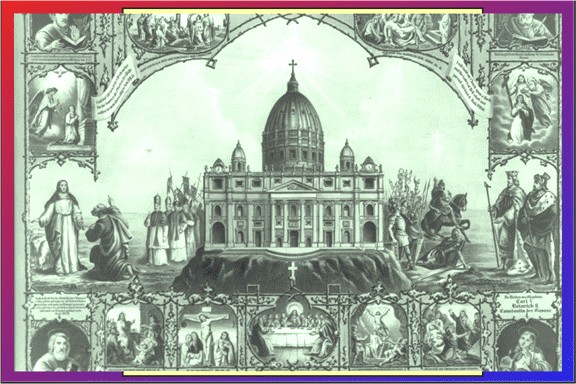 The Roman Catholic Church was the only church during the Middle Ages. The church was said to be able to control where one went after death, and determined much of how people lived. When in confusion, Kings and Queens would often go to the church for the pope's approval. This eventually made the church able to become involved in political and other non-religious issues. The church also became involved in the economic world, as it controlled large amounts of the land due to monasteries.

Even in the church there was a hierarchy. The leader of the church was the pope, followed by the cardinal which is appointed by the pope and elects a new pope once the current one dies. Below the cardinal is the archbishop which is the bishop of a main diocese. Next is the bishop, who is the teacher of the church doctrine, a priest of sacred worships. Like the bishop, the priest is ordained. The priest administers most of the sacraments and can be with a particular religious order. On the lowest level is the deacon, who studies and prepares for priesthood.

Although Kings often went to popes for approval on decisions, there was also a rivalry between the two. This was mainly caused by attempts by the pope to gain more power. The pope held all religious power, and it was his job to teach commoners/peasants. Therefore the pope saw choosing who works for the church as their choice only. But the King, who owned all the land, believed that he had the right to choose his own bishops and head of churches.

Cause and Effects of Crusades

(C) Wanting to take Jerusalem from the Muslims

(E) Expanded use of money economy

(E) Exploration of China and India

Motivations for the Crusades

Jews- Wanted to protect Jerusalem from Christians and Crusaders

Muslims- Wanted to recapture their holy land from the enemy

BLACK DEATH IS CONFIRMED TO BE IN THE AREA

Attention all citizens, it has been confirmed that the Black Death is in the area. The plague is said to have originated from Central Asia, and has been spread by trade routes. Rats and fleas are the main cause of infection, but interacting with anyone who is infected will also result in infection. There are three types of the plague: Bubonic, Septemic, and Pnuemonic.

Bubonic infection attacks the lymphatic system, resulting in swelling of lymph notes, black spots to appear, fever, aches, and chills. Death can occur within 2 to 7 days

Septemic infection attacks the circulatory system. Symptoms of this type of infection are often similar to Bubonic symptoms, but bleeding and seizures also occur. Death occurs less than a day after infection.

Pnuemonic infection is the most deadly, with a 100% mortality rate. Symptoms of the Pnuemonic plague are coughing, coughing of blood, chest pain, or fever. Death occurs within 2 or less days.

To better prevent infection, avoid any contact with rats or those who are already infected. Contact with the infected, direct or indirect, will result in your own self to become infected with one of the types of plagues listed above.

Jazmine is using Smore newsletters to spread the word online.