WHERE ARE THE WHITE TIGERS?

WHERE ARE THE WHITE TIGERS?

There are only about 200 white tigers left in the world. there was five living subspecies but three of them already went extinct. tigers are a protected animal and its illegal to hunt them, but people are still hunting and killing these animals. without these white tigers food chains would be jacked up because they are a top predator. we could prevent this by guarding them. even though we already do its obvious we aren't doing a really good job with that. but we can make a difference in that by basically executing anyone that harms the tigers because these tigers are 1 of a kind. they just don't pop up anytime. they aren't like any other animal they aren't purebred they are inbred. they would have to mate with a relative like a father,brother. that's why they are so rare and people are just killing them. 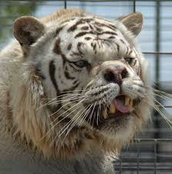 tiger with down syndrome 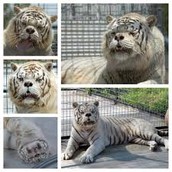 another picture of a white tiger with down syndrome

reason why people dont want to do anything.

some people don't want to prevent it because they don't think of the white tigers as much as the should be. they don't think about how the tigers can go extinct they just probably think they wont end up going extinct and find its own way to get the population back up. but they don't understand these tigers are 1 of a kind. 3 or species went extinct because people were carless.
WHITE TIGERS "Facts VS Fiction"

in the video it talks about how they first found white cub, they actually found the first white cub in india and brought it over to the us. when the cub got older they breed it with a normal color tiger. and they came out the regular color. it a double recessive gene which is a bad thing. in order for them to get white they would of have had to breed with their daughter.