The Duck and the Squirrel

Once upon a time there was a duck and his name was Quakers, and there was a squirrel named Chuck. Chuck was out walking by the pond to see if he could find any nuts. While he was walking Quakers saw Chuck and said, “Hi, my names Quakers!” Before Quakers could say another word Chuck burst out laughing and said, “Ha that’s the most pathetic name I have ever heard!” Quaker turned around and started to cry a little. Then Quakers ran home to his mom and told her what happened. Mrs. Quake who is Quakers mom said, “Well that’s not very nice, how about we go talk to Chuck.” Mrs. Quake and Quakers went back to the pond to try and find Chuck! Soon they spotted Chuck over by the side of the pond eating some nuts. Mrs. Quake and Quakers walked over to Chuck and said, “You need to stop bulling people!” Chuck rolled his eyes and went home. The next day Chuck came back to the pond and spotted Quakers and said, “Oh poor Quakers needs his mommy to stand up for him!” Quakers didn’t say a word! Chuck went off and saw a frog named Lolly! Lolly saw Chuck and said, “Ha your names Chuck really so pathetic!” Chuck realized that you should treat others the way you want to be treated because now he was being bullied because of his name and he didn’t like it, so Chuck went home and never wanted to bully again.

Treat others the way you want to be treated! 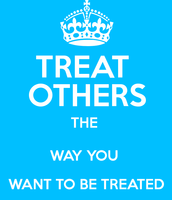