Get email updates from SOC 206 Group:

Marriage on the Decline!

Today only about 55% of men are married and 52% of women. The marriage population has decreased significantly, but why?

Women today are less likely to depend on a male partner for financial support. Women are moving into the workforce and surpassing their male partners income. Our patriarchal society is starting to shift. We see women as doctors, lawyers, and CEO's. 60 years ago women in professional occupations were unheard of. Men were in favor of those types of jobs. The USA is seeing more generations of strong independent women. On the political aspect of this subject, there are many women that are being appointed as judges. We see more women stepping up to take on the challenges that face the world. 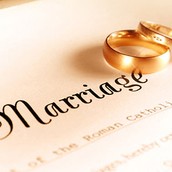 Today, it is becoming increasingly common for an individual to find a career and be focused in work related issues. But has this had an effect on the relationships of today? It has been found that the "percentage of the population that is married has steadily declined." (Sociology of Families pg. 248). This is also taking a toll on the age that men and women are getting married at: In 1950 the average age for a male to get married was 22.8 years while females averaged at 23.03 years old. Today men average about 29 years old while women are at 27 years. This is showing that the "median age at first marriage for men has taken a slight downturn since 1996, whereas the median age for women has continued to climb." (Sociology of Families, pg. 248). This also shows the decline in the "gender gap" in median age. Because of the worker mind set of today, this is making for a quick turnaround in the amount of people who get married, and when.

In the past 50 years more and more women have been entering the workforce and leaving the domestic life behind. The increasing war on gender inequality is causing women to really challenge themselves and really dig into those careers that you wouldn't normally see a woman in. Also, the societal standard of women is changing in that we want to see people of all genders be individualistic and independent. The societal focus is now gear towards being more independent in all aspects of life. In 1950 only 33% of women worked. Today it is 57% and rising. With more women pursuing careers, there is not need or rush to get married. The primary goal of women now is to find a sustainable career that will help them be more independent and financially stable on their own.

Couples are now choosing to wait to have children. in 1950 most women had their first child at 22 years old and men at 24. This also coincides with the idea of the gender gap decreasing in size. According to the United States Department of Labor, Women comprised 47 percent of the total U.S. labor force. It also says that Women are projected to account for 51 percent of the increase in total labor force growth between 2008 and 2018 (United States Department of Labor). More women are going into the workforce, which means that there is less of the family oriented planning and more of the planning for a new job, or something of that matter. People are now putting traditional family life on the back burner to peruse careers and live successful lives.

Marriage in Relation to Other Social Issues

On week four, our class talked about how marriage and the workforce combine and how it has changed over the years. We have previously talked about how the average age of marriage has changed for the worse over the years, how couples are waiting longer to have children and how more women are coming together to join the workforce. Now, we will talk about how this topic clashes or helps other aspects in other social issues.

Marriage in the past was close-mindedly defined as "the state of being united to a person of the opposite sex as husband or wife in a consensual and contractual relationship recognized by law," (Merriam-Webster). Now, the definition is more open-minded and includes couples of the same sex. Marriage ties in with the issues of sexual orientation inequality. America, was not open to seeing gay and lesbian marriages in the past, and even some today are not open to it, but the progression to getting to that broad-minded state is in favor.

Another issue that Marriage clashes with, is racial discrimination. In the past, it was illegal to be married to someone of another race than your own, but this has only changed in recent. This concept is still foreign to some citizens of America. Even it is still foreign in Hollywood. There are not many movies out there that depict interracial marriages. Here is a video that reports on interracial marriage in Southern America:

U.S.: Mixed Marriages in the South | The New York Times

I have had a wide range of different family experiences throughout my life. I was five years old when my parents separated and six when they divorced. I lived primarily with my single mother, during which time she moved up from being a community corrections officer to a high ranking administrator in the state of Washington. This illustrates what our poster is talking about women being more prevalent in the workforce and this change in our society allowed my mother to support me solely on her income growing up, something that probably would not have been able to happen in the past.

My second experience with family came at age 11, when me and my mom moved in to my grandparent's house. Kinship ties and extended family aren't as important in American culture compared to others, but I am so thankful that I had that experience and I can see why it is such an important aspect of other cultures.

Finally, after we built our house, my mom's boyfriend moved in with us, so I have also had firsthand experience with cohabitation. Cohabitation is something that is becoming more and more common in America. It is most common among those with a college education. It is less common among groups who are less educated and that follow more traditional values. As someone who has experienced this first-hand, I think that cohabitation results in better relationships and maybe even marriages that are more likely to have positive outcomes.

I have been fortunate enough to be able to have both parents in my life. They have been together since they got married. The road hasn't been easy, they have had their ups and downs but they pulled through together. My parents have both moved from job to job ever since I was a kid. My mom started work at Fred Meyers while my dad worked two jobs with cocoa cola and the post office in the state of Washington. When we moved back to Samoa my mom worked her way up the work force and found a job in the teacher education branch at the American Samoa Community College. It relates to our poster because my mom started off as a stay home mom, but as money became tight in our family she had no choice but to find a job.

Another experience I have had, is with my older sister. She had my nephew when she was 18 but didn't get married until she was 23. Before she got married she had to work two jobs to make ends meet to take care of her son. I personally believe that the reason behind the number of women in the workforce increasing is mainly for family needs.

I think Women are strong enough to stand for their own and that is the reason behind the increase with females in the workforce. I am glad that the number of the women i the workforce has increased because it shows how our country has taken great strides in gender equality in the work force!

Luckily, I was born in a household who knew how to stay together, through thick and thin. My parents are still married today, and it has been a great model for me and my siblings. Their marriage is inspiring to me because they have that one thing they do together, but then they also have the other things that they do on their own. They remind me and my siblings that there needs to be that breath time away from each other, but the whole time, each one misses the other. My mother never really liked to take vacations without my father, and didn't do them often. We usually went on vacations as a family. These experiences were definitely something that I think a child would need in their childhood.

My family definitely values family time, but they also value doing well in the world. This is not just a concept of my immediate family, but also my extended family. I think that families struggle to find that balance between work and family, but once the family gets that balance, it is well worth it in the end.