The Book Fair begins this Friday!

Our Spring Book Fair starts this week! The fun will begin on Friday, February 27th, and will last through Friday, March 6th. We'll also be open before and during All Arts Night on Monday, March 2nd, and following our Walk at School event on Wednesday, March 4th. Make plans to visit this exciting celebration of reading!

If you can't make it out to the Book Fair--or just want to shop from the comfort of your own home--visit our Online Book Fair, open February 22-March 14! There's an expanded selection, and all orders ship free to the school.

*We accept cash, checks (made payable to Fork Shoals School), and all major credit cards. 6% tax is added to all purchases.*

Forms have been sent home for the Greenville Drive Reading All-Stars Program. This can be done along with our school Quarterly Reading Challenge. Reading All-Stars forms will be due to Ms. Knight on or before March 6th.

All students who turn in the form will receive a voucher for the Greenville Drive celebration game on Monday, April 13th. Let's plan to have a huge turnout for Fork Shoals School by showing our love of reading!

Our 3rd Quarter Reading Challenge has begun! Your goal is to read as much as possible between now and March 24th. Reading logs have been sent home, and extras will be available in the library or here.

All reading logs will be due no later than Friday, March 27th (our last day before Spring Break)! After Spring Break, prizes will be awarded to the top readers in each grade level, and every participant will receive recognition. 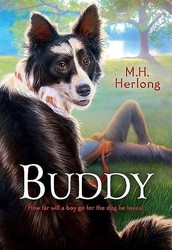 Book of the Week: Buddy

Tyrone “Li’l T” Roberts has wanted a dog forever, but he never quite expected to get one the way he did.

On the way to church one Sunday morning, Li’l T’s dad hits a scraggly, old dog with the car. Even though the family doesn’t have the money to take care of this injured dog, Li’l T is convinced that this dog, who he names Buddy, is meant to be his. With the help of some folks at church, Buddy gets the help he needs, and even though the dog loses a leg, he gains a home with Li’l T.

Li’l T and Buddy are the best of friends, but something is about to happen that could tear them apart forever. A hurricane named Katrina is bearing down on New Orleans, and the family has to leave everything behind…including Buddy. There’s just no room for him in the family car. Li’l T wants to stay behind with Buddy, but his parents won’t hear of it, so they leave Buddy in an upstairs bathroom with enough food and water for the next couple of days. Surely the storm won’t keep them away more than two days, right?

No one is prepared for Katrina’s path of destruction. This monster of a storm even hits the family’s refuge in Mississippi, and Li’l T soon learns that there isn’t much left of his home in New Orleans. Flood waters have destroyed much of the city, and there may not even be a home to return to.

Immediately, Li’l T thinks of Buddy. Is his dog still locked up in the bathroom? Is he wondering why Li’l T hasn’t come back for him? Has Buddy been rescued, or did Katrina claim one more victim? Li’l T isn’t sure what’s going on, but he’s determined to find out what happened to the dog that became his best friend.

It’s not always easy to keep moving when so much has been taken away from you. Li’l T and his family have lost so much because of Katrina, but they’ve still got each other, and Li’l T has the hope that he will be reunited with Buddy one day. But will their reunion be everything that Li’l T expects, or will he realize that sometimes the only thing you can do is move on?

Read Buddy by M.H. Herlong to see how tragedy brought two friends together, tore them apart, and taught one young boy what true courage and sacrifice really mean.

Labels for Education and Box Tops

Turn in your Labels for Education and Box Tops by Wednesday, February 25th, for our next count. Which classes will have the most this time?

Join us as we celebrate the arts! A brief PTA meeting will begin at 6:30pm. Beginning at 6:45, walk around to experience some of the arts at our school. Every student will have a piece of artwork displayed. There will also be art activities in the art room, Zumba in the gym, and recorder presentations by students. The Book Fair will also be open until 7:30.

Students are encouraged to take action and research famous African Americans and their inventions and/or accomplishments during the month of February in honor of Black History Month. These projects will be displayed in the cafeteria for all to see.