Happy Tuesday! Hope everyone had some pie to celebrate Pi Day yesterday.

In areas where falciparum malaria — the most dangerous kind — is common, all pregnant women are given doses of anti-malarial drugs at regular intervals, whether or not they are tested for the disease. A new study led by scientists from Uganda and UCSF found that women who received sulfadoxine-pyrimethamine for prevention were much more likely to develop malaria symptoms during pregnancy and to have parasites in the placenta when their babies were born. A similar study done in Kenya and published in The Lancet in 2015 had similar results. Some experts believe the W.H.O. should change its recommendation, while others worry using artemisinin for prevention (in addition to treatment) could speed the emergence of parasites resistant to it. ♧ 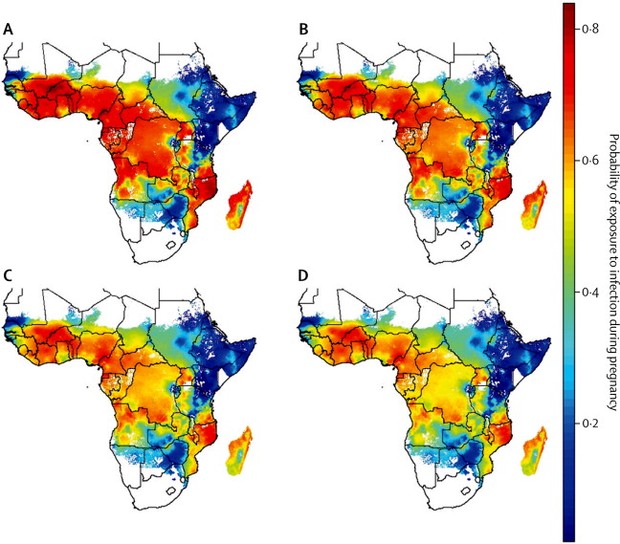 Figure: 2010 Per-pregnancy risk of being exposed to Plasmodium falciparum infection during pregnancy in the absence of interventions, according to different parity strata: first pregnancy (A), second pregnancy (B), third pregnancy (C), fourth pregnancy and risk averaged over all pregnancies (D). PDF of Study

About a quarter of all deaths globally are attributable to preventable environmental factors, such as air and water pollution, according to a report just released by the World Health Organization. Interestingly, this number has not changed much from 2006, meaning we have improved very little in the last ten years. The WHO says that better environmental management could prevent the deaths of 1.7 million children under five, who are especially prone to serious illnesses arising from respiratory infections and diarrhoea. “There’s an urgent need for investment in strategies to reduce environmental risks in our cities, homes and workplaces,” said Maria Neira, WHO’s public health chief. ♧

Here's an interesting piece on international NGOs and how “we need to earn the right to survive the future" - something I'm proud to think VHW does on a daily basis, but the idea of continuously earning the right to exist should be thought-provoking for the whole global health community. ♧

Last summer, the UN hailed the signing of the Addis Ababa action agenda on development finance a historic moment. The international community is currently struggling to mobilise money from the traditional donor governments for long-running development programmes, while NGOs and bilaterals are increasingly looking to the private sector, philanthropic foundations and emerging donors. Everybody needs financing from somewhere...

The Guardian is going to be starting a commission series around development finance, and has started off with a Q&A on the topic for 2016. They've summarized the panel event here into eight steps forward: ♧

Burundi in the headlines

The WHO released a report of 34 countries, including Burundi, who don't have enough food for their people because of conflicts, drought and flooding. ♧ Meanwhile, The European Union has just suspended direct financial support for the Burundian government. The European Union funds about half the annual budget of Burundi and has imposed sanctions on officials close to the president. The EU says they remain committed to providing emergency assistance and are preparing projects to ensure basic services for the population, but without channeling resources through the government. ♧ In 2014, the EU committed about $68.4 million in development aid to Burundi, of which €15.5 million went directly to the government. ♧


On a happier note, a Burundi orphanage founder is one of four finalists for a humanitarian award created recently in memory of the Armenian Genocide: The Aurora Prize for Awakening Humanity. It is meant to honor those whose exceptional work to preserve human life in disasters created by humans, such as war and ethnic strife, puts them in great peril. The winner, who will be announced on April 24th, receives $100,000 and designates an organization that inspired his or her work to be the beneficiary of $1 million. ♧

This is their blurb on the Burundi Finalist:

Marguerite Barankitse, from Maison Shalom and REMA Hospital in Burundi, saved thousands of lives and cared for orphans and refugees during the years of civil war in Burundi. When war broke out, Barankitse, a Tutsi, tried to hide 72 of her closest Hutu neighbors to keep them safe from persecution. They were discovered and executed, whilst Barankitse was forced to watch. Following this gruesome incident, she started her work saving and caring for children and refugees. She has saved roughly 30,000 children and in 2008, she opened a hospital which has treated more than 80,000 patients to date.
The four finalists:


The Guardian did a satirical piece on NGO employees who work at a 'Desk in the West,' with "10 handy tips to make your day at the office more field-like." Number 5 is "Feel sorry for a donkey." I found it amusing. ♧


Have a wonderful week and a lovely St. Patrick's Day. I'll see some of you Thursday.