Technology as we know has changed forever...

Technology as we know has changed forever... 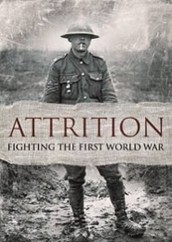 What is Attrition Warfare?

Attrition warfare is a military strategy in which a belligerent attempts to win a war by wearing down the enemy to the point of collapse through continuous losses in personnel and material. The war will usually be won by the side with greater such resources.

Some tactics used in Attrition Warfare are:

A popular strategy during World War I was trench warfare, army men would dig up into the ground for miles and they would shoot at anyone who walked in the no-man zone. Almost every country used trench warfare and stalemate, they were the plans used in war of attrition

The stalemate was gain of land during trench warfare... both sides would gain some land, but lose it again because of the poor conditions and different technologies which were introduced during this time.

From the very beginning, the war grew rapidly out of control. New styles of warfare, like the use of gas and heavy artillery, produced new kinds of horror and unprecedented levels of suffering and death. Some new weapons used during WW1 were:

•Flamethrowers were weapons that were 'sheets of flame'.

•Grenades were bombs that had a latch which was pulled and thrown to the target of choice.

•Poisonous Gas was popularly used by the Germans, yet it was used first by France. •Machine Guns were used to shoot people that crosses the No Man's Zone, now the machine gun has been advanced and is capable of much more.

•Pistols were the officer's weapon.

•Rifles were smaller sized guns, which is still the infantry's greatest asset after all these years.

•One of the larger machinery were tanks, they were designed and the use of tanks during wartime was extremely effective.

•Trench Mortars were an ancient weapon that gave fresh life in the trenches.

•U boats and submarines

Tank in WW1 looked like this, they worked very efficiently for army needs and it could take out not only people, but buildings.

U Boats and Submarines

This is a German submarine used for sneak attacks in the ocean that take out whole ships filled with civilians. For example: the Germans used U boats and submarines to sink Britain's ship, The Lusitainia.

The flamethrower was almost like a gun that shot out fire and it could burn people, trees, houses, etc.