sapna is using Smore newsletters to spread the word online.

Get email updates from sapna:

Ocean fishing is one of Canada's oldest industries, it started in the early 1500's and European countries came to Newfoundland every summer to harvest the rich fishing grounds. Over the years, the Europeans established permanent fishing villages for themselves. It provided the economic base for European settlement in some areas. Fishing today in Canada's whole economy is only 0.1% but still remains a traditional way of life and holds a place in Canada's cultural heritage.

All of the fisheries within this industry are also involved. Commercial fishing is involved, which is a fast and manageable way to collect a lot of fish. It has become very efficient using nets and factory ships. On the east coast the fish that are produced are cod, haddock, capelin, scallop, and lobster.

The industry is located to the edges of the continental shelf, up to 370 kilometers from shore. On this shelf are shallow areas called banks that get lots of sunlight which increases the population of plankton and attracts more fish. The best-known regions are the Grand Banks and the Atlantic Ocean. 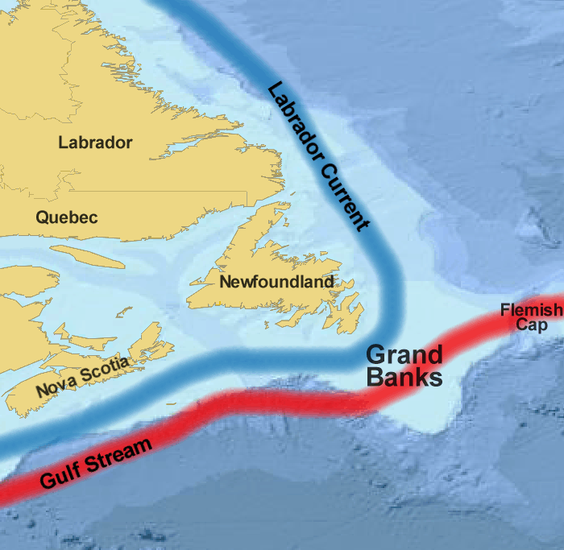 East Coast fishing has provided a lot of fish for many people as a great food supply. It has also linked many European countries together with Canada, which can help create more trade with one another, which will benefit us both. There are around 49, 957 fishers employed and the value of catch is approximately 1, 853, 572 dollars.

Physical Characteristics that Allow the Resource to Exist

The Labrador current is an important factor of the physical environment of Eastern Canada. It is an effective factor that shapes the coastal Labrador and Northeastern Newfoundland. Its interactions with the Gulf stream over the grand banks and has accommodated the basis for the fishery that supported Newfoundland and has impacted cities around the Atlantic Ocean. Climate change that the Labrador Current brings also effects the marine habitats and brings an interaction between humans and marine life. Lastly, the banks are about 400 miles long and 300 miles wide which provides lots of water to fish from along with the Labrador Current.

What: The industry hasn't always been going well, there have been many collapses, the collapse of the cod fishery is one of the worst.

Where: It took place in Canada in the East Coast industry specifically within the Cod Fishery.

When: This issue has started in 1992 and is currently still a problem that hasn't been resolved. It has had a huge economic, ecological and cultural impact on Atlantic Canada.

Who: The issue was caused by people themselves because they over-fished cod and have completely wiped them all out.

Why: The collapse took place because of the cod fishery being quite a success, more people were asking for more fish. As a result they have been over-fished. 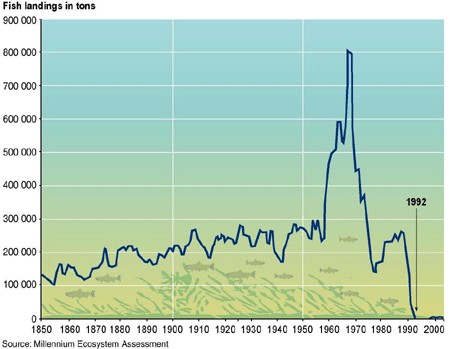 Another issue is contaminated water. Large factories that create a lot of air pollution result to polluted water, same thing goes to the garbage that is thrown into the water or is blown into it. Polluted water creates a toxic environment for marine life causing them to move deeper or further and adapt to a new life.

sapna is using Smore newsletters to spread the word online.