Thanks to all who participated in our 2nd Quarter Reading Challenge. Nearly 300 students and staff members turned in reading logs, and participants read a total of 374,385 pages!

The grade level reading totals were:

The top readers in each grade level were:

Each grade level winner will receive a special prize this week, and all participants will be recognized on a poster outside of the library.

All Fork Shoals students have received their reading logs for the 3rd quarter. Students should read as many pages as possible between now and March 18th. Reading logs MUST be turned in no later than Tuesday, March 22nd. We’ll have prizes for those who read the most in each grade level, and every participant will receive recognition.

Join the Greenville Public Library for the worldwide celebration of the Harry Potter series. The event will be Thursday, February 4th, 6:00-7:30pm, in meeting room A of the Main Library.

Please consider contributing to the News Team's Donors Choose project. If funded, this project will help the News Team get some updated equipment, including microphones, video cameras, a CD player systerm, and a TV.

To learn more or make a donation, click here.

All BoB team members should have read at least 5 of the books for competition by now. All 10 books should be read by mid-February. 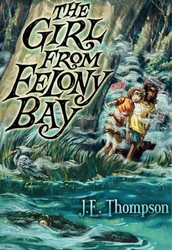 Book of the Week: The Girl from Felony Bay

Abbey Force has had a rough time of it lately. Her father is in a coma and can’t defend himself against some fairly awful accusations. Her beautiful home, Reward Plantation in the Lowcountry of South Carolina, had to be sold to pay off her dad’s supposed debts. And Abbey had to move in with her horrible Uncle Charlie and his wife, Ruth.

But it’s not all bad…

Abbey soon meets the daughter of Reward Plantation’s new owner. Bee Force (no relation) is Abbey’s age, and their families have a connection that goes back to before the Civil War. It appears that Abbey’s ancestors kept Bee’s ancestors as slaves, and Bee’s family took on Force as their last name after the war was over. Even though their family stories could have driven a wedge between these two girls, instead it brings them closer together, and they soon become as close as sisters…and they’ll need that closeness to weather the storm that’s headed their way.

Abbey is determined to prove to everyone that her father is innocent, and Bee wants to help her new friend. It quickly becomes clear that the two girls are on to something, but what? Why are there “No trespassing” signs and big holes around Felony Bay? Why was this parcel of land sold separately from Reward Plantation? Why is Uncle Charlie so smug all of a sudden, and what does the Deputy Sheriff have to do with his new attitude? What’s the connection with Abbey’s dad and the accusations made against him? Can two twelve-year-old girls really prove that something sinister is going on?

Abbey and Bee are working to solve this mystery, and their investigation takes them all over Charleston and Reward Plantation. Danger abounds, and the girls eventually uncover a plot that dates back over a century. Can they reveal the truth before it’s too late? Or will all of their sleuthing make them the next target of whoever is trying to frame Abbey’s dad?

Join Abbey and Bee Force in their quest for the truth when you read The Girl from Felony Bay by J.E. Thompson, a nominee for the 15-16 South Carolina Children's Book Award!

January 25th is Family, Math, Science, and Technology Night! Pre-ordered meals will be available for pick up at 5:30 PM. Rotations start at 6:00 PM. Some activities will require a ticket and will be first come. We are excited about a great night!

Fresh Fruit Friday is back!

Bring in a piece of fresh fruit on Friday, January 30th. Listen for the announcement for everyone to enjoy their fresh fruit. What a great way to remind us to stay healthy!

La Fogata in Simpsonville will give 10% of the proceeds back to Fork Shoals during both lunch and dinner times on January 26th. Be sure to share with family and friends. Remember that there is also a coupon for La Fogata in the Entertainment Coupon book that was sold at the beginning of the year.