Visakhi is one of the main holidays and it is held on April 14th. it marks the day that Guru Gobind Singh, the tenth Guru, established the khalsa

Kesh- Uncut hair, which is kept covered by a distinctive turban.

Kirpan- A religious sword, which represents readiness to protect the weak and fight against injustice.

The Harmandir Sahib, or Golden Temple, in Amritsar, is one of the most popular gurdwaras in the world. The original gurdwaras was built in the 1580s by Guru Arjan Dev, the fifth Guru, who wanted Sikhs to have a central place of worship. It has four doors to show it is open to all, regardless of religion.

it is a book of hymns and poems and this is strange for a holy book, but it is also open and accepting to all religions. 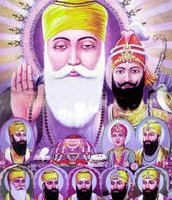