Tawny is using Smore newsletters to spread the word online.

Get email updates from Tawny:

Our class would like to know who is Mahatma Gandhi. We are going to take a brief look at who he is, where he came from and why he is important. We will talk about what we can learn from him. Although he was a religious man we will only focus on how he protested unfair laws in a peaceful, but effective manner and how he valued all people.

After we talk about who he is, the class will do a small geography lesson by locating the three main countries he visited. Your child's homework will be to ask you some questions. Please be thinking about your own thoughts on Gandhi and if there was ever a time you experienced unfair treatment and how you handled it or wished you had handled it. Finally, we will write in journals and have a class discussion about what we learned from him.

Please let me know if you have any questions. I will allow your child to take his or her journal home to share it with you. 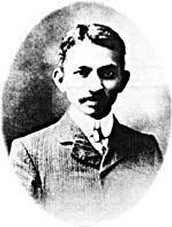 Muhatma Gandhi was born on October 2, 1869 in Porbander, India. His real name was Mohandas Karamchand Gandhi. Following the wishes of his parents, Gandhi went to London to study law. He was a timid young man and initially struggled as an attorney. In his first court case he froze up and fled the courtroom. Later he got a job in South Africa where he observed racial discrimination. When he was kicked off a train because he was Indian, he found his courage and decided to do something about the unfair laws. This was the beginning of his legacy as a man who stood up for oppressed people.

Gandhi spent nearly 20 years in South Africa with his wife and children. He spoke out against unfair laws and encouraged people not to obey them. His methods of protest were never violent and he often spoke of love and courage. He taught people not to respond to their attacker, but to use their words, body and community to facilitate change. He believed that calm determination was more powerful than anger and that love was the strongest, yet subtlest, force and should be used to create change. He lived in communities that no one wanted to live in and he performed tasks that were meant for the untouchables (people considered to be lowly servants). He wanted to show people that everyone has value. Gandhi brought about several changes in South America before returning to India.

At that time, India was ruled by Britain, but Gandhi thought India should be ruled by Indians. Britain was charging them high prices and high taxes on necessary products. The Indians grew and harvested cotton which Britain would buy at low prices. Then after manufacturing the cotton into clothes, would sell them to the Indians at high prices which they couldn't afford. Indians were also not allowed to produce their own salt but had to buy expensive salt from the British. The law forbid them to make their own even though India had plenty of it. The Indians were not being treated fairly. Gandhi protested by making his own cloths and asked Indians to only wear clothes made in India. When he protested the salt laws he walked for 24 days and began to make his own salt at the end of the march. He and many others were arrested for this. They went willingly because they were committed to non-violence. There was not enough room in jail for them all and many were released. Some of the Indians didn't like each other because they had different religions and it was hard for them to get along. Gandhi helped them learn to work together to gain their independence, which they finally got in 1947.

Martin Luther King, Jr. and Nelson Mandela, who also stood up against racial prejudices, were inspired by Gandhi. They used the same approach of non-violence to protest racial injustices in their own countries. People respected Gandhi for his firm, but non-violent approach. He has been a beacon of hope to the oppressed and the world will never be the same again.

Speaking to the people of India

Spinning cotton to make his clothes

"Strength does not come from physical capability.

It comes from indomitable (unshakable) will." 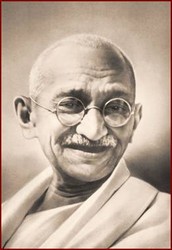 1) Ask family and friends what they know about Gandhi and why they think he was important. Is there anything they admire about him? If there is anything you could ask him, what would it be?

2) Ask family and friends about a time when they were mistreated and how they handled it. Why do they think they were treated unfairly?

3) Use a world map and find South Africa, India and England. See if you can figure out how far away England is from India.

4) Write in your journal about what you learned from his story. Some ideas you could write about are how you might stand up to bullying, how to treat others, how you feel about people who are different from you.

Tawny is using Smore newsletters to spread the word online.